Stephanie Brown coming to the New 52U, convention questions about Cassandra Cain expected to double. 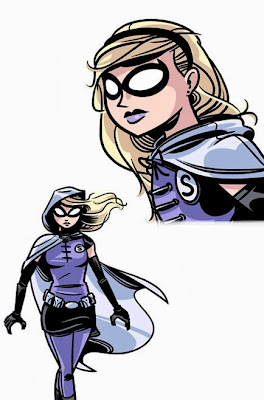 News from New York Comic Con! Stephanie Brown, aka The Spoiler, aka Robin IV, aka Batgirl III, is making her New 52 debut in the rather goofily-entitled, Scott Snyder-showran Batman Eternal! If you like the character, this is either great news (she is no longer non-existent in The New 52U) or terrible news (I know when I've seen some favorite DC characters of mine re-introduced into The New 52 so far, my thought process has generally been something along the lines of, "Oh cool, it' s Captain Marv---AAAAH!").

There's been no revelation of what, exactly, Stephanie Brown will be wearing or what she'll look like, but the few articles I've read have said she'll most likely be appearing in her Spoiler identity (although with Damian Wayne dead and Robin III Tim Drake's superheroic identity retconned so that he was always "Red Robin" and never [just] Robin, there does seem to be an opening for a new Robin).

As for the costume, I assume it will look a lot like her original duds, maybe with more black or a darker purple, and certainly with visible seams, armor plating, treads on her boots and fussily detailed gloves. You know, New 52 (If she's first appearing in issue #3, and Jason Fabok is drawing the first story arc, he'll be the first to draw her in a story, but that doesn't necessarily mean he'll be designing her).

So why did I post the above picture, of a Spoiler costume designed by the great Dean Trippe a few years back? Oh, just because I love that costume, and the way it cleverly yet organically blends her Spoiler and Robin costumes together (Her Batgirl costume was fairly awful, her Spoiler costume not so great unless Damion Scott or Jeff Parker were drawing it and her Robin costume was just Tim Drake's with a longer shirt to act as a mini-dress; that Trippe costume is the best she's ever looked, if you ask me. And you didn't. But I'm answering anyway).

I've said this before—long before the New 52 was announced—but Trippe is such a good designer, and so adept at designing costumes for DC's teen superheroes, that I wish DC would have hired him in some Re-Design All Our Teen Heroes capacity.

Now, they obviously went with Jim Lee, a handful of his WildStorm cohorts and/or whatever artists happened to be drawing whatever title was in question when they redesigned the costumes of their entire universe. If I were in charge, I probably would have went to Darwyn Cooke* and asked him to re-design much of the DC Universe, coming up with costumes that were instantly recognizable to anyone who had ever heard of heroes like Superman and Batman and Wonder Woman and Captain Marvel, but more streamlined, and taking this once-in-a-lifetime opportunity to re-tweak them into "ultimate" costumes. And then I would have looked to folks with similar abilities and sensibilities to design different corners of the DCU, asking Trippe to take on the younger heroes, from Nightwing own down (It goes without saying that I would not have condensed the entire history of the DC Universe into five years, so there would actually still be a bunch of different superheroes of various ages running around).


*And if I were the Boss of All DC and was in charge of the New 52-boot, and Cooke said no, I probably would have next asked Bruce Timm, and then maybe Frank Miller (Shut up there are some totally awesome costumes in Dark Knight Strikes Again I don't care what you say!) and/or Alex Ross. I'm actually surprised they didn't ask Alex Ross, given how much everyone, the current DCU regime included, have loved so many of his designs from Kingdom Come, importing the likes of Red Robin, Zatara, Offspring, Wildcat, Gog and others into the DCU in the years between Infinite Crisis and The New 52-boot. I suspect there's some hard feelings somewhere, as Ross has been notably absent from DC for so long, but who knows.
Posted by Caleb at 8:36 PM

I wonder if Morrison is pissed because Stephanie is appearing NOW.

Wonder if Didio had her "New" 52 version greenlighted out of spite...

Nah...I`m probably over thinking this. Or maybe not. Maybe I am.

I dunno. Seemed as if Morrison was on board with the new52 because he had to have known about his gig on Action at least a few months in advance. Any possible bad blood would have occurred in the post-new52 Batman, Inc., with references to Grant's JLA#1 in the 90s (Metamorpho), Looker, Halo, and Freight Train from the Outsiders. So that makes me think that Morrison did that stuff AFTER finding out Steph wasn't coming back.

Caleb, I've known Alex for almost 20 years and when we last had dinner, I asked him about the new52, in particular why he wasn't at least doing variant covers. He kept his cards close, now I've seen he's doing the Astro City covers and he kept quiet about that, as well.

The impression I got from him was that, initially, they were looking more for the 90s "aesthetic" when it came to the costumes of most characters.

Alex Ross, Darwyn Cooke, et al are all far too talented to design for the New52. If you want truly horrendous costume designs, the search begins and ends with Jim Lee and David Finch.
So there we are.

I don't think it's really possible to ruin Spoiler, plotwise.

She was introduced as girl with daddy issues.
Then teen mom.
Then used in a feud between Batman and Robin.
Then tortured to death.
Then brought back, replaced my second favorite DC character, and was startlingly incompetent for a Bat-family member.

Honestly find it hard to like the character at this point due to the way Steph-fans threw Cassandra Cain under the bus when Steph became Batgirl. (Suddenly a character they commiserated over was a creepy Mary Sue no one would ever want to read about.)

@Wayne: Ironic, considering how hard they're trying to ignore the actual 90s DC.