Sorry gang; I don't have time to write an intallment of "Comic shop comics" tonight. 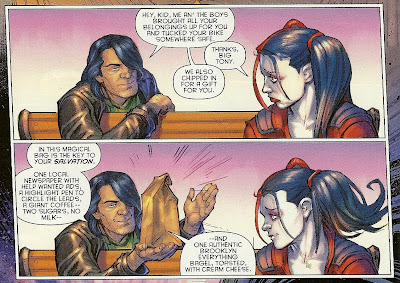 Wait, why would you put a cup of coffee inside a paper bag?! That is insane. That is the most insane thing in Harley Quinn #1, a comic book starring a criminally-insane madwoman. (The above two panels, by the way, are drawn by Chad Hardin, and aren't really the best example of his work, which is actually quite strong, I thought).

Anyway, just checking in with a post to inform you that there will be no post tonight. I went to the shop and brought back a pretty good haul of new books (for me, these days, anyway), but between doing some writing that I will actually get paid for and some holiday-related activities—gift-wrapping, card-making—I'm afraid I won't have time to give them full reviews in a post here tonight, even the half-assed, off-the-top-of-my-head, gut-reaction reviews that generally make up this feature. Thursdays are usually bad for me, too. Maybe I can get to those by Friday night...?

In the mean time, here, let me offer you a preview!

Batman '66 #6: Nothing the least bit Satanic, despite the 666 on the cover; I'm disappointed, Jeff Parker. On the plus side, there's art from two EDILW favorites, Ty Templeton and Ted Naifeh, plus the usual awesome Allred cover.

FF #15: Probably the best, most fun book I read this week, a silver cloud bearing a gray lining—it's the second-to-last issue.

Harley Quinn #1: Nice cover art, nice interior art and as for the script, well...I'll tell you about it at some length tomorrow, at a place that is not here. (But did I mention the part where a guy puts a cup of coffee inside a paper bag? With other stuff in the bag too?)

Classic Popeye #17: Sixteen fewer pages than the previous issue, still $3.99! Don't make me drop you, Classic Popeye! (I should note that its still 32 pages of comics for $3.99, and thus 12-pages more than that same amount gets you from most Marvel comics and a few DC comics).

Saga #17: This was good, although while I love that particular character, I don't love him that way, and really didn't want to see him as he's portrayed on the cover. (Hey, why isn't the term "The Opposite of War" used in more pornographic website names? Not that I've ever been to a pornographic website. Or even know what pornography is. What is this strange word I'm typing over and over? Am I possessed? Is this some form of automatic writing?)

Young Avengers #14: A really good comic I think I'm actually going to be really glad to see go, given how little it does or has done in over a year.

That's all I got. Barring my waking up at 7 a.m. full of vim and vigor, I probably won't have actual reviews of greater length of any of the above tomorrow, although I will post my regular Thursday night links to things I wrote elsewhere that you can read. And, in the mean time, don't forget you can follow me on Twitter, although I don't tweet all that often or all that well, and I have a new-ish Tumblr thingee, focused on not-comics but also a lot of comics.
Posted by Caleb at 9:49 PM

(Woops! When I woke up, there were two comments on this post; one was spam and the other was from Mordicai pointing out that many places in New York City DO in fact put cups of coffee in paper bags, which I personally think is insane, but then, I am an Ohioan, and haven't visited NYC since long before I drank coffee. When attempting to mark delete the spam mail though, I first accidentally "remove comment"-ed Mordicai's comment. Sorry!)