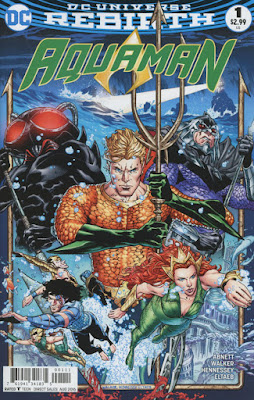 The Aquaman: Rebirth #1 special (discussed here) proved to be a very good indicator of what the new Aquaman series would be like, apparently, as this issue basically follows the various promises made in the special. In a gesture to try and bring peace and understanding to the dealings between his two worlds, Aquaman has set up an Atlantean embassy of sorts. During its big grand opening, Black Manta attacks. He bombs the place, killing some folks, and then, as he narrated his plans to do in the special, he goes right after Mera, because Black Manta has been reading comics long enough to know the best way to hurt your male opponent is to fridge his girlfriend/wife/fiancee.

I liked artist Brad Walker's work quite a bit, here. He only contributed the cover to the Rebirth special, but is the regular artist on the monthly series. This is by far the best work I've seen from him. That's the good news. The bad? Well, this might have seemed like a fine issue #7 or even #19 of the previous monthly series, but we're a good five years out from this new take on Aquaman, his cast and his place in the wider shared setting, and at this point the contents of this issues just seem tiresome and repetitive.

Which kinda breaks my heart a little, as I really like Aquaman. Or, at least, I liked him before Geoff Johns reimagined him in the wake of Flashpoint; the new guy seems more like a watered-down Namor. 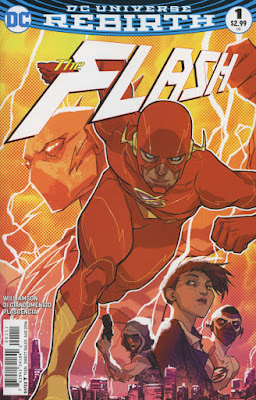 This issue opens with a three-page revisitation to Flash Barry Allen's origin story–you know, the whole getting-hit-by-lightning-while-standing-in-front-of-a-shelf-of-chemicals thing, adding a detail. Just before it happened, a fellow police officer of Barry's was in the process of convincing him to quit obsessing over solving the cold case of his mother's own murder and instead investigating the death of the cop's brother.

That leads to a very puzzling two-page spread chockfull of frustrating continuity narration:


Someone has affected reality, taking ten years of our lives and memories from us. But I can't help but smile because my best friend, Wally West, is back.

And now he's working with the original Teen Titans to see if he can find out what happened to us.

Batman and I already have our suspicions on what was done to our world, but we decided it was best we kept our findings to ourselves until Wally gathers more evidence.

Wally was The Flash for years without me, so I trust him on his own. Except I'd be lying if I said I don't miss having a partner running by my side.

Okay, so there's a lot to unpack there. If I understand it correctly, and there's no guarantee that I do, then it would appear that Barry Allen now has two, distinct, parallel sets of memories. He remembers Wally West, he remembers the original Teen Titans (who didn't remember themselves until Titans: Rebirth #1, when Wally zapped them with memory lightning) and he remembers Wally being The Flash "for years", which was during a time when Barry was, um, dead...and apparently from those five years that someone stole from them.

At the same time that Barry has those memories, his world and his history as it has been since Flashpoint hasn't been altered, so apparently he has all of those memories as well, and has them compartmentalized.

His non-chalance about a being capable of stealing ten years from the universe, as well as completely reshaping the world and its history is a little odd, as that would seem to be like a much, much bigger deal than say, working the old day job, or having lunch with Iris West and her nephew (coincidentally also named Wally West, despite being an entirely different person). But Barry just brings this all up by way of tabling it.

Williamson probably could have–and should have–just not mentioned any of that, as he kicks the book off with continuity knots to meditate on, and reasons for a reader to question the relative unimportance of any and everything Barry's going to do when he should be trying to save reality itself from this threat h e has his suspicions about.

That said, Di Giandomenico and color artist Plascencia really save that spread, as running along the bottom tier of the pages are four panels in between which Flash jumps in the form of lighting, performing various, daring, creatively imagined and executed high-speed rescues.

After the segue into a continuity rabbit hole, Williamson focuses much of the rest of the issue on Barry's frustration at not being able to be everywhere at once, which irks him particularly because he can be almost everywhere at once, some substantial panel-time focused on the other Wally West (the black one or the new one, which ever descriptor you want to use to distinguish him from the white old one), who is apparently being set up as Barry's new partner.

And then, in the climax, Barry's cop buddy from the flashback gets hit by lighting and gains super-speed.

Please note that only two of the characters on the cover who are not Barry Allen actually appear inside the issue, and one of them, New Wally West, is not dressed like that within. 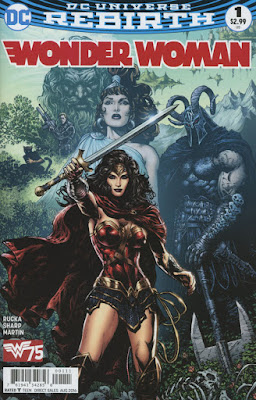 Remind me again why everyone was so excited that Greg Rucka was returning to the character? Was it really that they liked Rucka's previous Wonder Woman run so much, or that they so disliked the runs by Brian Azzarello, Meredith Finch, Gail Simone and pretty much everyone who followed Rucka...?

This first issue reminded me of all the things I didn't like about Rucka's run: The focus on Diana as warrior rather than superhero, the plodding pace, the obviously-written-for-the-trade lack of incident, the jargon-filled dialogue, the fact that it takes about two to three minutes to read the comic.

Which isn't to say it's bad, it's just not that good, and given the strength of some of the recent Wonder Woman comics I've read or been reading–Wonder Woman: Earth One, The Legend of Wonder Woman, some of the material from DC Comics Bombshells and Sensation Comics–this felt flatter than I would have liked. The writing side of things is perfectly acceptable, with nothing all that wrong with it, it's just not that great, and I'd really like a great Wonder Woman comic, if that's not too much to ask.

So when we last left the post-DC Universe: Rebirth Wonder Woman, in the pages of Wonder Woman: Rebirth #1, she was so pissed off about the fact that DC kept messing with her continuity that she punched a mirror and pretended it was continuity, and then visited Olympus to try and get to the bottom of things.

This issue does not pick up where that one left off.

Instead, Rucka reintroduces us to Wonder Woman and a handful of supporting characters. As for the title character, Rucka writes her rather well. She's very formal, even imperious, in her dealings with her foes, but there's a certain amount of sense to that, and her three warnings before kicking their asses is at least somewhat in keeping with the whole warrior fighting for peace thing.

As for the supporting cast, the first person we meet is Etta Candy, who Rucka and artist Liam Sharp have reimagined as Amanda Waller. You'll recall the original Etta Candy was awesome, but when George Perez took over and relaunched Wonder Woman (and Wonder Woman) for the first time in 1987, he changed her from a short, obese, rough-and-tumble, candy-obsessed white sorority sister into a dowdy, middle-aged, overweight and still white Naval intelligence officer. Post-Flashopoint, she was introduced as a slim, young black woman with short hair and freckles who worked under Steve Trevor at SHIELD ARGUS. This new version was apparently meant to reflect the appearance of actress Tracie Thoms, who played her in the un-aired pilot for the David E. Kelly-produced Wonder Woman TV show that never got picked up.

Here, the post-Crisis and post-Flashpoint versions are merged visually, so now she is a middle-aged big, black woman with long hair, freckles and a government gig, although now she's been promoted to "Commander"...it's not clear what military organization she's commanding from a secret base in Langley, Virgina. Steve Trevor now seems to answer to her, rather than vice versa, though; he's no longer wearing his black spandex and body armor outfit, but more standard military garb. And he's also got a beard now.

Trevor is leading his team in a fight against a warlord in Africa, and Commander Candy seems worried that Wonder Woman, who just appeared on the continent, might be flying there to get involved. She's not. She's there beating up hyena men, working her way up to their boss, who is introduced on the final, splash page: Barbara Minerva, The Cheetah.

She too has a new look, but it seems to amount to nothing more than a haircut.

Wonder Woman asks Barbara to help her find Themyscira, which she has somehow lost. The end.

The art is good. In fact, this may be the best Wonder Woman art on the regular title since...I don't know, forever? Cliff Chiang was very good too, of course, but Sharp's style is quite far removed from Chiants. Sharp balances a fantasy look with a more standard superhero comic look, with the level of detail of some of the better modern Wonder Woman artists (Perez, Phil Jimenez), but a bigger, bolder, more muscular and more dynamic look. As I said before, it reminds me a bit of Rags Morales, who is one of my favorite comics artists, period.

I have a sinking feeling this book is going to take a while to find its footing, and that while might stretch out even longer on account of the fact that the now bi-weekly Wonder Woman will be alternating between two different stories, each with a different artist and set in a different time period, for at least the first story arc...er, first two story arcs.

"Commander Candy" is a great name for a Metamorpho foe.