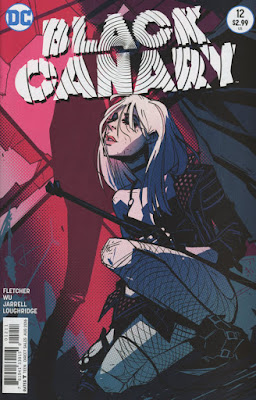 Black Canary #12 (DC Comics) So, what if the Brenden Fletcher-written Black Canary solo title wasn't cancelled, but went on for, like, a few more decades, and DC allowed the character to age in real time? That's the centerpiece for this final issue of the series, with original artist Annie Wu returning to join Sandy Jarrell to close out this unique chapter in the character's life.

Dinah's possible future life flashes before her eyes after she was impaled with a katana, and each scene that follows jumps a few more years into the future, as she continues her music career while an apocalypse of sorts tied to the villain of this story arc changes the world outside her career for the worse.

Can she pull it together in time to defeat the demon, with the help of her friends? Spoiler alert: Yes.

This book has been somewhat rocky, and I've always liked the premise better than the execution, but Fletcher certainly deserves credit for doing something so radically different with the character, and tying her sci-fi, superhero adventures and new day job and secret identity to sound so thoroughly, an aspect of the character that isn't generally explored (and, in fact, she has gone without for long, long stretches of her existence; Dinah's "canary cry" may be her super-power, but it is apparently not an intrinsic part of her character).

Fletcher and company also do a pretty good job of wrapping up this short chapter of Dinah's life, too, prepping her for her "Rebirth" appearances in the pages of Green Arrow (which, as I noted last week, could really be called Green Arrow/Black Canary, at least based on the Rebirth special) and Batgirl and The Birds of Prey. 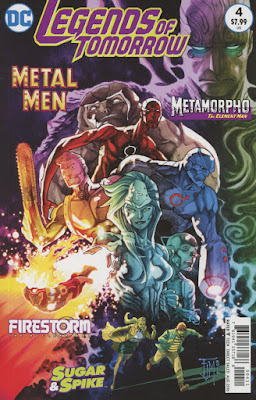 Legends of Tomorrow #4 (DC) In the latest issue of DC's four comics-for-the price of two Legends of Tomorrow, the second half of the book is again the strongest. The Firestorm and Metamorpho features just keep doing what they've been doing, and if there is any real development in either it is simply that the art looks a little less sharp than it did in the previous issues. The stand-out is, once again, the Keith Giffen-written, Bilquis Evely-drawn "Sugar and Spike," in which the P.I. team investigate a museum of superhero oddities run by an obscure Green Lantern villain to see if he is displaying an equally obscure Green Lantern alien sidekick that may or may not still be alive, at the behest of Green Lantern Hal Jordan. As with the previous installments, this is the sort of comic that doesn't really work in the context of The New 52, built on forgotten Silver Age continuity as it is; the museum setting, for example, is filled with costumes and props of oddities of DC continuity that The New 52 was built upon throwing out, like Kite-Man and the original, Golden Age Red Tornado (odd Sugar and Spike didn't even seem to notice that costume hanging there, given their connection to the woman who wore it).

As for the fourth and final feature, Len Wein and Yildiray Cinar and Trevor Scott's Metal Men strip, it similarly incorporates the greater DC Universe, although in its current form, rather than in its past. Having just defeated Red Tornado, our title characters get rescued from the military by "Clifford Steele, Attorney at Law," hide-out with Cyborg on the Justice League satellite, unmask their Aonymous-like foe The Whisperer as another old DC supervillain (still sans his crazy costume, sadly) and, finally, meet the army's all-new Metal Men, which are lead by Copper, the post-Infinite Crisis addition of a second female into the Metal Men's line-up.

I really like one of these features, I kinda like another, and can tolerate the other two just fine, so at 80-pages for $7.99, I think this format is pretty great. It doesn't look like DC has any plans to continue it indefinitely with different features, and I'm not sure about the economics of this model–like, if DC would lose money commissioning new material to fill it, or if there are enough creators willing to work cheaply enough on characters-who-couldn't-sell-a-monthly to keep this going–but I wouldn't mind reading a book like this indefinitely. In fact, it could be a good way to not only introduce old characters into the new DC Universe (Metamorpho, Sugar & Spike) or give the spotlight to supporting characters (The Metal Men), but to keep cancelled titles with some following going (Firestorm).

For example, if Omega Men or Doctor Fate or Midnighter can't carry a monthly, but sell well in trade (a big "if" on the latter point, I know), then maybe Legends of Tomorrow offers a good way to generate revenue to pay creators while they stock up enough pages to fill trades? I have no idea.

If they do do more books with more features, I have plenty of suggestions for characters, but it might be a good idea to use some of those who are actually on the TV show called Legends of Tomorrow (The Atom, The Hawks, Rip Hunter, Jonah Hex, etc). Just a thought. I don't spend as much time in comic shops as a lot of people DC could ask, but I did overhear a conversation the week the first issue came out in which a customer excitedly picked it up and asked if it had anything to do with the new show and the retailer had to admit that no, it in fact did not, eventually adding that they did share Firestorm in common. 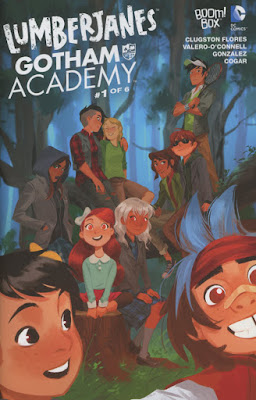 Lumberjanes/Gotham Academy #1 (Boom Studios) In discussing this book on Comics Alliance, Elle Collins called it "a natural crossover that anyone who's a fan of both properties has probably imagined, and a comic I don’t think any of us ever thought would ever actually be published until it was announced." I think that pretty accurately sums-up the out-of-left field nature of the book. Despite both comics being about groups of kids having supernatural adventures, their common ground isn't as obvious as that of easier-to-conceive of inter-company crossovers, like, I don't know, Black Canary/Jem and The Holograms: Battle of The Bands or The Rocketeer Meets the DC Comics Bombshells or Godzilla vs. The Mighty Morphin Power Rangers or whatever.

Having now read it, it reminded me a bit of DC's other recent out-of-left-field crossover, Batman/Teenage Mutant Ninja Turtles. It similarly is the work of a creative team that isn't known for work on either franchise, or some combination of creators from both books, and it is similarly pretty clearly the work of one publisher borrowing the other's characters: With Batman/TMNT, it was a DC Comic co-starring IDW's version of the TMNT characters, while here the Gotham Academy kids are appearing in a Boom Lumberjanes miniseries.

As with Freddie Williams II's artwork on Batman/TMNT, I was disappointed with pencil artist Rosemary Valero-O'Connell and inker Maddi Gonzalez's in that because they aren't regular artists on either book, the result is a crossover between Lumberjanes and Gotham Academy in which none of the characters look like themselves, and everyone looks slightly off. That is, I should note, a matter of expectations, however, and I assume that over the course of the next five issues I'll find the artwork fitting the characters better. At this point though, it just seems like a very sharp departure, particularly from that of Gotham Academy which, until the recent "Yearbook" story arc, had a pretty clearly defined look with little to no variation.

The story, written by Chynna Clugston Flores (who I wish was drawing it as well, simply because I love her art so much), is at this point a pretty simple, straightforward and effective get-the-groups together one. Lumberjanes camp director Rosie and Gotham Academy's Professor MacPherson both go missing, and the girls of Roanoke Cabin and Gotham Academy's Detective Club go looking for them in the weird woods surrounding the Lumberjanes camp. They find each other, and some animal skull-headed, robe-wearing humanoid monsters that shoot energy beams.
Clugston Flores does a pretty good job of capturing what is likeable about each book, and making each of the many characters seem like themselves. I liked it well enough that I was more than halfway through before I realized that Lumberjanes is set during the summer, and that the girls attend a summer camp, while Gotham Academy is set during during the school year, since the kids attend a school and thus the two groups should really never even be able to meet like this.

Maybe that's a clue that Calendar Man is behind it all...? 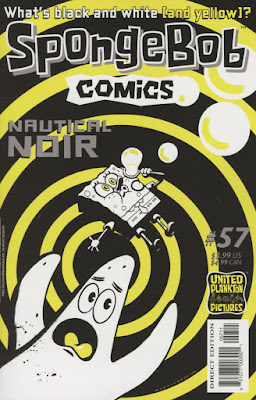 SpongeBob Comics #57 (United Plankton Pictures) The theme for this issue is accompanied by a visual one. All of the comics are told in black and white and yellow, and almost all of them riff on classic black and white films, particularly, as the cover alludes to, film noir. The best, or at least my favorite, however, is Jay Lender and Marc Hempel's "The Clarinet of Dr. Calamari," which is a pretty direct parody of...well, you can guess what, with some visual references to classic silent, expressionistic films thrown in.

As always, any single comic book that features contributors as wide-ranging as Hilary Barta, Chuck Dixon, James Kochalka and Maris Wicks is one that's well worth your time and $4. 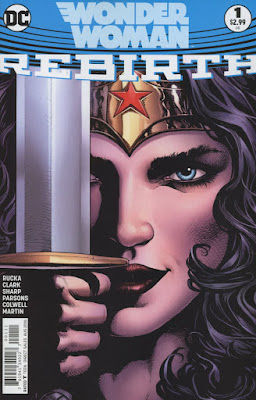 Wonder Woman: Rebirth #1 (DC) I plan on writing about this in greater depth later in another installment of a column devoted specifically to the fruits of DC's "Rebirth" initiative, so I'll just be brief here. The art team is different than the one originally solicitied. That team was Paulo Siqueira and Liam Sharp, the latter of whom was to be one of the two artists on the ongoing Wonder Woman; instead Matthe Clark pencils and Sean Parsons inks the first 14 pages of this book, Liam Sharp draws the last six and Siqueira's credit is reduced to a "Special thanks to." I'm not sure what that indicates, if there were last minute changes to the script that necessitated most of it being re-drawn, or if something got fouled up with Siqueira's schedule. The art looks fine, though, particularly Sharp's, and visually Wonder Woman will not only be a vast improvement over what it's been under the Finchs, but a pretty good-looking book in general.

As for Rucka's story, I laughed when I read the first line. I laughed repeatedly throughout. And I shook my head while laughing during a large panel referencing one of the silliest aspects of Infinite Crisis. I'm pretty sure "comedy" wasn't what Rucka was going for, though. Like Geoff Johns' DC Comics: Rebirth #1 special, the subject matter here seems to be something along the lines of "Wow, we sure fucked up with The New 52, huh? What were we thinking?" That subject matter from Rucka, who sat the entirety of the New 52 out, is at once a little more genuine (Johns was chief architect of the New 52, with his name all over it, after all), and also a little petty, given it reads like a direct attack on someone else's Wonder Woman run (and that someone is Brian Azzarello, not Meredith and/or David Finch). This is just the first chapter exploring the fact that Wonder Woman's story keeps changing, and it's quite possible Rucka will develop it in such a way that he incorporates the previous status quo in a way that changes without criticizing it, but, for now, it reads like a pretty straightforward meta-discussion of Wonder Woman continuity.
Posted by Caleb at 1:26 AM