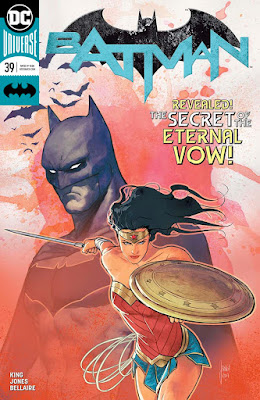 In that nicely crafted done-in-one story, Superman and Wonder Woman get whisked off to another dimension where they spend what they think will be all of eternity battling a never-ending horde of monsters. Superman and Wonder Woman are both super-hot, long-time friends who were at one point at least attracted to one another, and are now stuck together forever; Superman, as far as he knows, will never, ever find his way back to his then-wife, Lois Lane. And so Wonder Woman comes on to him on what may be the very last night of their lives, and he turns her down, because a) he's Superman, and b) he loves Lois that much.

Again, a pretty great story. (If you haven't read it, here's a 2005 synopsis from Mr. David Campbell.)

Anyway, in this issue of Batman, Tom King sends Batman and Wonder Woman to another dimension where they spend what they think will be all of eternity battling a never-ending horde of monsters. One night, Wonder Woman comes on to Batman, and the "To Be Continued..." tag appears at the end of the very last panel, just as the two are leaning close to one another and looking at one another's lips.

The story made me uncomfortable, based, in large part, on how it is somewhere between a rip-off and an homage to Kelly's story...although given the fact that said story is so (relatively) old, there's a damn good chance that a large percentage of the people who read this week's issue of Batman won't have read that issue of Action, and so, intentionally or not, this issue's plot is being presented as if it were an original one, rather than a riff (There's not even a "Special Thanks to Joe Kelly" and company in the credits panel.

But since King is writing this story for DC Comics, who also own the Kelly story is referencing, it's all, well, legal and above-board, but it still makes me feel a little icky, you know? It's legal, but is it ethical? Is it cool? Is Kelly cool with it? Does Kelly know? On the other hand, how many times have various DC writers--and now CW TV show producers--referenced the goddam Black Mercy flower from the Alan Moore-scripted 1985 Superman Annual...?

Wonder Woman goes to pick Batman up for a pre-planned stint filling in for "The Gentle Man," a warrior who does endless battle with a horde of monsters representing each of humanity's sins, staving off their invasion of Earth (Why they just don't let the monsters come to Earth and fight them there, where everyone can team up against them together, rather than making one poor sap due all the fighting, I don't know). Time passes differently in that dimension, however, and at the point that they have been there about ten years, they begin to suspect that The Gentle Man is not coming back for them. That's when, after the third or fourth mildly flirtatious thing Wonder Woman says to him, Batman finally leans in for what looks like it could be a kiss. Not as dramatic as the tension in the old Superman story, of course, given that Batman and Catwoman aren't engaged, just dating, and, well, I think it's a pretty safe bet that they're not actually going to marry and, even if they do, it won't last as long as many comic book marriages do.

After taking the last two issues off, Joelle Jones returns as the artist. She does a fine job on all the characters, even when it comes to selling a particular costume Batman wears as either cool or ridiculous, depending on how you want to look at it, which is how everything Batman should look. King gives Wonder Woman a slightly weird syntax, as if English wasn't her first language--and, duh, it wasn't--that sounds kind of off, given how established she should be in Man's World at this point/how she talks in all the other comics she appears in.

Batman remains far better than bad, and this is hardly the worst issue of King's healthy, 40-ish issue run, but this issue has more, well, issues than most. 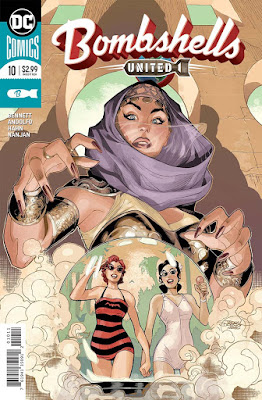 Bombshells United #10 (DC) Mirka Andolfo and David Hahn illustrate this issue, the next chapter in the Batwoman and Renee Montoya vs. Black Adam storyline. Miri Marvel, who we are apparently calling Shazam for some reason now, is drawn into the conflict this issue and, guys, I could have sworn that when Black Adam first appeared he was a giant who was, like, 12 feet tall or so, but now he seems to be normal-sized again. Was I hallucinating before...? 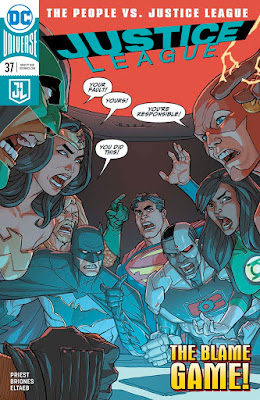 Justice League #37 (DC) My efforts to catch-up with this book are still a work in progress, but it's on my pull-list now, so I shouldn't miss any more issues, as I did with #36. Apparently what I missed was that a Justice League super-fan has risen to the League's defense, murdering someone while impersonating Batman last issue, and here attempting to kill another critic of the League while dressed as Green Lantern Hal Jordan, who he thinks is the best Green Lantern (Characters repeatedly refer to him as a or the fan, and writer Christopher Priest is literally making the character reflective of an old sub-group of fans, specifically the ones who freaked out about Hal Jordan's heel turn in the 1990s).

It works in the context of the issue, but I remain a pretty poor judge of Christopher Priest's run on the book so far, given how fractured my reading of it has been. Pete Woods is MIA, replaced by Phillipe Briones. There's a flashback sequence, apparently showing the fan when he was a little boy, and it's got the League's costumes all wrong: Batman, Superman and Wonder Woman are all wearing their current costumes rather than their first New 52 ones, and they are fighting alongside Martian Manhunter who...well, I never quite figured out at what point J'onn was with this League, other than "briefly" and somewhere between the first New 52 Justice League arc and the second one.

Also, I think that's supposed to be a cigarette in the character's mouth when he was a little kid--again, not sure if that works with DC's current nobody-is-paying-attention 6-9 year timeline--but if so, it is the tiniest, weirdest-looking cigarette I've ever seen.

Those little things aside, Briones' work is pretty okay, but it's a jarring change from that of Pete Woods, and an unfortunate one to make mid-arc like this. That's the downside of the accelerated publishing schedule (well, one of them). Artists have to change frequently, and if the stories aren't planned out all that well, it means they change

The cover, by the way, has absolutely nothing to do with the interior, so I'm curious why it ran this issue, and if it was meant to run with the previous one, or perhaps the next one... 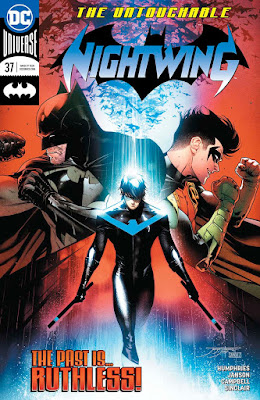 Nightwing #7 (DC) Remember what I saying about artists in reference to Justice League? Well, this issue of Nightwing also employs a guest-artist, and does so effectively. The majority of the issue is set in the past, in the earliest days of Dick Grayson's career as Robin. So while one artist draws the framing sequence, the entire flashback is drawn by Klaus Janson. Yes, it is a sharp change in style, but that change falls right where such a change is natural, even expected.

If you recall where we left off, Grayson is trying to stop a villain with some sort of weird mind-control powers known as the The Judge, and he's been telling us that he's failed to stop him twice before. In this issue, we see his first failure to stop him, alongside Batman and a rather unexpected Bludhaven vigilante with a name like a roller derby player. 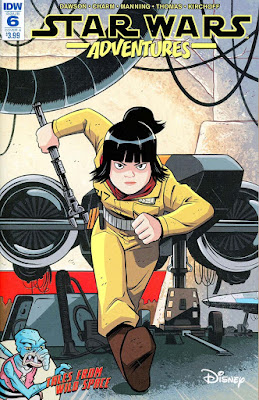 Star Wars Adventures #6 (IDW Pubishing) The latest issue of IDW's all-ages Star Wars comic features everyone's favorite breakout star from the latest Star War, adorable Resistance mechanic and Force Awakens super-fan Rose Tico. Writer Deliliah S. Dawson and artist Derek Charm (whom I am an even greater fan of than I am of Rose or Kelly Marie Tran) craft a 14-page short story in which the Resistance has just moved into a new ship, and the mechanics are all still trying to get to know it via various methods. To the befuddlement of some, Rose's preferred method is reading. Naturally, when there's a malfunction that puts dashing, handsome pilot Poe Dameron in mortal danger, Rose is the only one who has the requisite knowledge to save the day.

As is so often the case with the films' "Expanded Universe" outtings, the story has the contrary effect of making the film's universe seem smaller as it tries wring new content out of it, so that rather than just being a semi-anonymous mechanic whose sister died in a battle at the beginning of Last Jedi (in service of a questionable plan launched by, um, Poe), here Rose rubs shoulders with Poe and Princess General Leia and her sister Paige even makes a brief appearance.

Still, it's a well-made short story revolving around the most recent film's non-porg breakout star character, and Charm does a pretty great job of capturing the core physical and emotional traits of both Rose and Poe.

Because that's too short a comic story to fill 20-pages and thus ask $3.99 for, there's the usual back-up feature: "Tales From Wild Space," this time young Anakin Skywalker from his Jake Lloyd days is the star. Though it's a six-page feature, two of those are devoted to a framing sequence, leaving writer Shaun Manning and artist Chad Thomas just four pages to devote to a story of Ani doing the right thing...a habit he will grow out of pretty quickly. The crew in the framing sequence are, by necessity, kind of tiresome, but the feature is redeemed by Thomas' drawings of super-cute slave child Anakin. I much prefer drawings of Baby Darth Vader to seeing him played by a child actor in live-action, I think.

Oh, and on the subject of Star Wars, I had Star Wars: Force of Destiny--Hera on my shopping list when I went into the shop today, but they were all sold out. Again, I was more interested in a creator than the title character--long-time Batman writer Devin K. Grayson was scripting that one-shot. I just mention that here in the off-chance that anyone from IDW or in a position of hiring creators at any other publishers are reading: You should totally offer Grayson well-paying gigs, because I will totally buy comics that she writes. That's at least one (1) guaranteed sale!

Rose and Paige will appear in the final of the five Forces of Destiny one-shots...I hope my shop doesn't sell out of that one before I get there...
Posted by Caleb at 4:50 PM