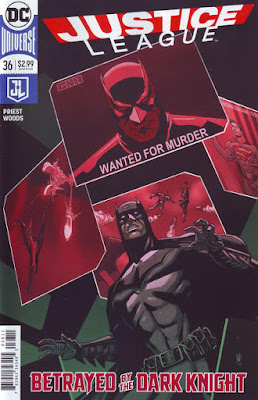 Justice League #36 (DC Comics) Christopher Priest has written four issues of Justice League so far. I've had trouble reading it, despite being fairly on top of DC Comics. First I read the second issue, because I had missed the first issue. Then I read the fourth issue, having missed the third issue. Then I read the first issue. And this week, finally, I visited another comics shop and found and thus read the third issue. So I'm all caught up, I guess.

What was the problem? I suppose it was mostly the fact that I didn't add the title to my pull-list as soon as I heard Priest was taking over with a certain issue, and then, failing that, my inability to notice the book the week that Priest's run started.

Certainly the fact that there are more than one Justice League book and they aren't too terribly distinguishable in terms of their titles--Justice League and Justice League of America--was a factor, as was the bi-weekly shipping of Justice League, which makes it very easy to fall behind if you miss an issue. After I originally missed the boat, I probably should have just trade-waited the series, but I did want to vote with my dollars for Priest on the Justice League, as that is a very, very good idea that has thus far yielded very good results.

Anyway, this one was another very solid issue all on its own. The opening sequence, in which Superman is in congress while a congress lady speechifies at him, brought up unwanted memories of Batman V. Superman: Dawn of Justice, and the sequence at the end was super-strange--why did Simon go with that lady into the bathroom and let her open his shirt and kiss his chest, or was he purposely springing the trap to get caught?--but the bits with the submarine and Aquaman's dual status as a Justice Leaguer and the king of a sovereign nation were all pretty interesting. Those sorts of conversations about jurisdiction and politics and charters and suchlike? I love that stuff. It's really too bad none of that is ever established in a clear way, but seems to fluctuate, depending on who is writing the book at a particular time. Like, even the fact that Batman is the leader of the League seems like a new invention of Priest's for this run.

In general, if there was a clearly established status quo of some sort, than stories that use that status quo as their starting point would have much more resonance. 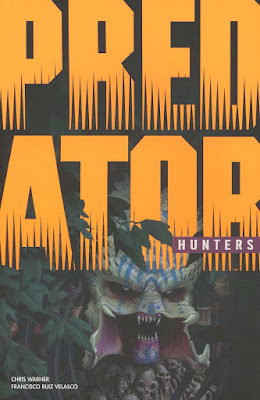 Predator: Hunters (Dark Horse Books) The simplicity of the Predator concept makes it one that is endlessly adaptable and riff-uponable, one that is perhaps perfect for comic book crossovers. Nigh unstoppable, mysterious alien big-game hunters who travel to earth in order to hunt the most dangerous prey and...that's it, really. Change the setting and the opponents, and Predator comics are essentially infinite. The one problem that quickly presents itself, however, is that it can be something of a challenge to keep doing those stories forever, and each new adaptation crosses another setting off the list of potential stories (And, additionally, after seeing Predator fight Batman, Superman Judge Dredd and the cast of Archie Comics, well, a guest star-free outting can lose some of its razzle dazzle).

For the five-issue miniseries Predator: Hunters, which could really lose the semi-colon for a more accurate title, writer Chris Warner has upended the original film's the-hunters-have-become-the-hunted premise, which just about every sequel and comics adaptation has riffed on, in an interesting way, the premise of this series being the-hunters-have-become-the-hunted-but-look-out-the-once-hunted-are-hunting-the-hunters-who-hunted-them. Or something like that.

A rich woman who belongs to a family that has hunted Predators since the 19th century--You know the story of Spring Heeled Jack? Actually a Predator--has assembled a sizable private operation devoted to finding and exterminating Predators whenever they arrive on Earth. In an interesting move, the woman, Jaya Soames, has assembled survivors from past attacks, some of which have delineated in past Dark Horse Predator comics, like 1992's Big Game andn 1993's Bad Blood (Soames' ancestor's meeting with a Predator occurred in 1997's Nemesis).

That Big Game survivor, Enoch Nakai, is our point-of-view character, and we follow his recruitment into Soames' organization and on their first big hunting trip. Reports of a Predator on a remote island in the South Pacific send them there, posing to the locals on a neighboring island as scientists. They find not one but four Predators there, and, gradually, a rather extraordinary story that once again reiterates an on-again, off-again theme of the Predator stories: That the alien hunters may seem monstrous, but nothing out-monsters humanity.

Francisco Ruiz Velasco provides the art, and it is pretty strong for the most part, although it is occasionally slightly glitchy, with panel-to-panel continuity errors, like in one panel a Predator might be holding a huge club, and in the next his hands are empty. Stuff lie that here and there.

I really liked the designs of these Predators, as their armor and masks are radically different than those of their predecessors, and there's a reason why provided, although I don't want to discuss it, as it's something of a spoiler. I will note, however, that it took me a few issues to remember that the Predators don't just wear their high-tech masks for show, but they actually have breathing apparatuses in them, as they can't breathe Earth's atmosphere for too long. So I guess they really should have been gasping and wheezing throughout this whole story.

Anyway, Warner has found some interesting areas to work in with this series, and it checks all the necessary Predator boxes while doing a few things that are either new or different, and the art is pretty good too. 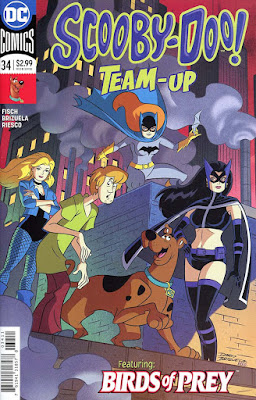 Scooby-Doo Team-Up #34 (DC) As is so often the case these days, the best versions of particular DC superhero concepts are the ones that writer Sholly Fisch and artist Dario Brizuela come up with in order for them to team-up with Scooby-Doo in Scooby-Doo Team-Up. This month, it's the Birds of Prey's turn.

This particular version of BOP features Batgirl and Black Canary (both dressed in the costumes they would have worn in, say, the late 1960s) and The Huntress (dressed, somewhat inexplicably, in her short-lived Jim Lee-designed crop top and booty-shorts costume from "Hush"), with a few panels worth of Lady Blackhawk.

When Gotham City is being terrorized by mythological birds, the Birds of Prey call upon the women of Mystery Inc to help them out, and Scooby comes along because, well, because his name is on the comic book, I guess. Fred and Shaggy appear on the first and last pages, book-ending Daphne and Velma's adventure with the Birds.

The mystery turns out to be ridiculously easy to solve--in fact, you've probably already guessed the perpetrator just by hearing about the theme of the crimes--and one wonders why Batgirl needed Daphne and Velma's help in the first place, but then, as is often the case with Scooby-Doo Team-Up, the plots are really only ever excuses to introduce, re-introduce and/or define various DC superhero characters by bouncing them off of the Scooby-Doo cast for about 20 pages. 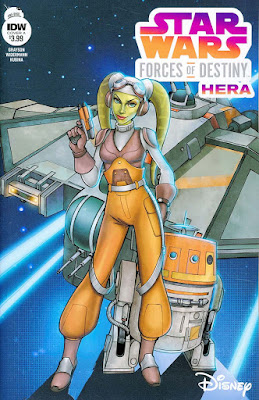 Star Wars: Forces of Destiny--Hera (IDW PUblishing) Okay, I had to visit a second comic book shop in order to do so, but I finally got my hand's on last week's Forces of Destiny one-shot, which I was interested in more for the writer, Devin Grayson, than the title character. I used to really dig Grayson's writing on the various Batman and Titans related titles, and often when I read a particularly sub-par issue of a comic featuring those characters, I'll wonder where the hell Devin Grayson is, what she's doing and why she's not writing Detective Comics or Teen Titans or whatever.

This issue, while technically fine, isn't really that great, though.

Grayson teams with artist Eva Wildermann for a done-in-one story featuring Hera Syndulla, the Rebel Twi'lek pilot from the Star Wars: Rebels cartoon series (Cantankerous droid Chopper is the only other member of her crew featured, and he's there mainly to give her someone to talk to when she would otherwise have to be alone). The pair are on a mission to recruit an agricultural planet to take the rebels' side in the war, but the Empire beat them to it, so Hera and some sympathetic natives hatch a plan to make exploiting the planet seem like a lot more trouble than it's worth. Save for a climactic chase, it is mostly devoted to detailing Hera's plan to oppose the Empire by incremental resistance, as opposed to open warfare.

Widermann's art hews pretty close to the designs of the cartoon, although something feels slightly off about it, given the show's 3D imagery and the comic's flattening of the characters and milieu down to a more traditional 2D plane. While most of the characters are fairly familiar humans and alien types, one of the new characters that allies himself with Hera appears to be an anthropomorphic otter. Here he just looks like a cartoon character, like an extra from Disney's Robin Hood cast as an extra in this comic, but that sort of design reminded me a bit of Saga, where alien races so often resemble Earth animals on their hind legs.

The design of the imperious Imperial leader is pretty cool; he's blonde and has a little mustache that made me think of Princess Bride-era Cary Elwes.

As fits the character that inspired it, this issue struck me as even more kid-friendly than the Leia issue I had previously read; they are all all-ages, of course, but this one seemed more "for kids" than "all-ages," if that distinction makes sense.
Posted by Caleb at 12:55 PM