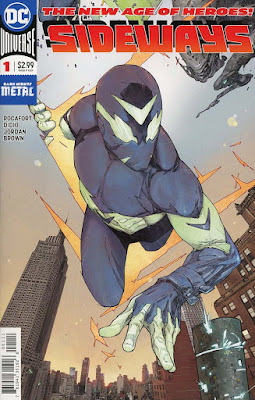 
...Yeah, sorry guys, I can't do it. My plan was to read and review at least the first issue of each of DC's "The New Age of DC Heroes" books, but I just can't bring myself to read this one. I like artist Kenneth Rocafort's work okay, although the relatively few books of his I've read haven't given me any reason to suspect that he's got a great new superhero concept in him and the storytelling chops to make a great comic book about that hero. The press release-articulated premise even shows some promise: "During the events of Dark Nights: Metal, high shcool junior Derek James accidentally fell through a rift into the dark matter dimension...In Sideways, he can create rifts in midair to leap through dimensions at will." Given the vast canvas of the DC Multiverse, that concept could be fun, at least for a certain kind of reader; is Derek James going to be DC's answer to Marvel's Blink...?

Still, try as I might, I just couldn't get by that single, poisonous credit on the cover: DiDio. This book is co-written by DC Comics Editor-in-Chief Dan DiDio.

There is something incredibly gross about DiDio, inarguably one of the most powerful and influential individuals in the North American, direct market-focused comic book industry, co-writing a high-profile comic book that is meant to be part of a new line, spinning out of a very successful miniseries. Actually, there are probably a lot of incredibly gross things about it, but it says one of two things to me, either of which is so icky I can't really sit down to try to read a 20-page comic book with such thoughts in my skull (And besides, I just got Green Lantern: Kyle Ranyer Vol. 1 and Superboy Vol. 1; I'm more than set with DC super-comics to escape into during my free time).

Here's one reading of DiDio co-writing Sideways, with Rocafort and Justin Jordan. From his place of power within his version of the comics industry, DiDio looked out all across the landscape for potential writers for a particular DC comic he knew was coming up on the schedule--current DC writers, former ones who could probably use a little work, new up-and-comers like those from the workshops DC has had the last few years, artist who would like to dabble in writing, Marvel writers who aren't on exclusive contracts, accomplished writers in other fields with an interest in comics, promising talent from the world of indie, self-published, online and mini-comics--and he decided that, out of all the possibilities, the very best candidate for the job would be he, himself.

That's no way to run a comics publisher, is it? Not only is it a complete waste of a valuable-ish gig, it demonstrates a lack of good taste, a lack of humility and a lack of understanding of your readership (He's hardly the first editor to write while in the position of relative power within one of the big two, but, unlike, say, Stan Lee or Jim Shooter or Archie Goodwin or Denny O'Neil, DiDio doesn't actually have a decent body of work that he didn't assign to himself, nor does he have anything in the way of a fanbase, or people who buy comics because his name is on them).

The other possible reading is that, from his place of power within his version of the comics industry, DiDio looked out all across the landscape for potential writers for a particular DC comics he knew was coming up on the schedule, and though he saw dozens, scores, even hundreds of potential writers who weren't looking back at him from his bathroom mirror every morning, he couldn't find any of them who actually wanted to work for him, work for DC Comics, or work on this Canceled-On-Arrival book starring what appears to be Blink-By-Way-Of-Spider-Man created by an untested artist. While that seems unlikely, it is a real possibility that the publisher could have trouble finding writing talent to work for them instead of any of the other, direct market publishers, or a prose publishing house with its own graphic novel imprints, or for themselves. There are lots of reasons that this unlikely-sounding possibility could be, from reservations about the culture of DC Comics to writers simply preferring to work on stuff they themselves own, but I have to wonder how DC's current publishing strategy of trolling-one-of-their-most-valuable-writers-ever-for-no-apparent-reason* is perceived by writers who consider working for the publisher in the future.

Those things--the culture at DC, the publisher's perception among writing talent, etc--are also things that are at least partially under DiDio's control.

So, beyond the fact that I never really enjoyed a DiDio-written comic for its writing--the Metal Men feature in Wednesday Comics is the only one I can recall enjoying reading, but then, that strip was quite elegantly drawn by José Luis García-López and inked Kevin Nowlan, so it almost couldn't have been anything other than enjoyable to read--it's hard to see his last name on the cover of this book and not think that it's very presence represents a failure to make good comics.

*While I think doing Doomsday Clock is as dumb as it is crass and creatively bankrupt, the one argument that anyone (probably an asshole) could make for doing it--retroactively, of course--is that it so far seems like it is a sales success. By the standards of a comic book miniseries in 2018. Not by the standards of, say, Watchmen. I cannot, on the other hand, imagine what the fuck DC was thinking by tossing Promethea into Justice League of America this week, or Tom Strong into the upcoming "New Age of Bloodlines" series The Terrifics. Look at the most recent sales charts analysis; JLoA sells less than 30,000 issues a month and is dropping...likely headed towards cancellation anyway, as there's a franchise refresh on the horizon. Even if there were thousands of Promethea fans out there who like the character, dislike her creators and are willing to buy appearances featuring her by other creators just because they love her so much (and there aren't), even if that doubles the sales of JLoA for a month or two, what does that really give DC? A...book that sells about 60,000 units for a month or so before plummeting back down to the mid-twenties again...? Is that really worth all the drama of pissing off/alienating Moore, J.H. Williams III, fans of either of them...? I can't imagine how one justifies these ABC characters showing up in these DCU books that makes a lick of sense.
Posted by Caleb at 4:26 PM

Agree with the overall sentiment, but it seems like you're overestimating the cost to DC of importing the ABC characters? At this stage, it's not like the Alan Moore well is ever getting unpoisoned, and any customers concerned about their treatment of Moore have probably already left the building. Whereas on the plus side, getting all the toys together means (a) there's a few more "units" of "IP" for lunchboxes, colouring books etc. and (b) #30-57 of JLA featuring Scott Lobdell plus, I dunno, Norm Rapmund, bringing us their take on kabbalah and quantum physics

Me, I'm waiting for the day they buy Top Shelf too, so we can finally get that William Gull/Joker teamup that fans have been clamouring for.

The Promethea crossover was pretty worthless, but I'm not against the general idea of using Moore's characters if there's a really great story to be told with them. I know he's famously prickly, but I don't know why he's treated as someone whose characters can NEVER be written by anyone else.