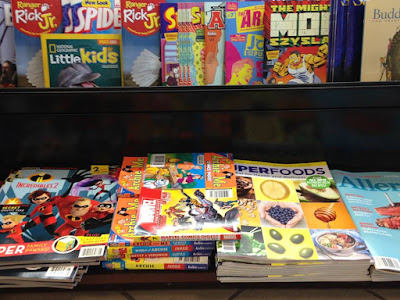 I have a write-up of Marvel Comics Digest #7, featuring The Avengers and Ant-Man and The Wasp, up at Good Comics For Kids today. The featured characters, the stars of the latest Marvel movie, made it more timely than some of the previous issues, and it seemed well past time to check the Marvel/Archie Comics alliance out. Admittedly, much of my interest was driven by the fact that repackaged Big Two super-comics content for sale outside of the direct market has been such a subject of conversation in certain corners of the Internet of late.

Why was there such upset over DC's Walmart exclusive anthologies, whereas Archie has been publishing these digests for over a year now...? If the same folks gnashing their teeth over the DC/Walmart books noticed these, they sure don't seem to talking about them as much...

Well, they are obviously pretty different books. The DC Walmart books are larger, akin to the size of regular comic books, whereas the Marvel ones are the same size as the other Archie digests; you can tell they are aimed specifically at kids because it likely helps to have tiny hands and small, healthy eyes to read the tiny, tiny, Ant-Man sized lettering of the digests (particularly in those super-wordy, Silver Age Stan Lee-scripted stories). The DC comics seems to be serializing their stories issue-to-issue, whereas the Marvel digests are just grab-bags of content unified under a particular character (and the stories chosen really did feel rather grab-bag-ish; they are not the stories one would choose if one wanted to, say, appeal to new, young readers with little or know previous comics exposure to the characters, nor are they the stories one would choose to try to point readers to the current Marvel line, or particular trade paperback collections).

And, of course, the Marvel digests don't have any brand-new content (although much of the brand-new content in the DC books seems pretty lackluster so far), nor are they being sold exclusively to a particular retailer. That is, comic shops can order the Marvel Comics Digests too, if they want, whereas only Walmart is carrying the DC/Walmart books.

I got the copy I reviewed at a Barnes and Noble last weekend. I was pacing around the magazines, waiting for my coffee from the cafe, and noticed they had moved and massively reduced the number of comics they sell. See those above? That was it, and they are now racked on a shelf closest to the floor, amid kids magazines (The last time I looked, which was admittedly a year or so ago, they were in another section, at eye level, and there were many more of them, including DC super-comics). Now it's just a pair of Simpsons comics, SpongeBob Comics (which is distributed by Bongo), Archie and The Archies, and then the Archie digests.

I would think retailers would regard Barnes and Noble as a far greater threat than Walmart. I have never, ever bought any thing at a Walmart that I could have bought from a comic shop before, but I have given my local Barnes and Noble money for stuff I could theoretically have ordered from my local comic shop.

Me, I am lucky enough to live just a short, five-minute walk away from the closest comic shop, but I am also lucky enough to live an even shorter, one-minute walk away from the nearest Barnes and Noble. I generally try to buy comics from specialty shops when I can and, obviously, shops are really the only way to buy serially-published comic books easily, but one can buy trade paperback collections from either a comics shop or a Barnes and Noble, and the latter is a far better source for manga (as was Borders). I mean, all of the comics shops I have shopped at have stocked manga, and all of them would generally order me whatever manga I asked for when I knew ahead of time to ask for it, but with the big box book stores, more often than not, it was all just there already, you know? Just about every time I have impulse bought a volume of a new manga series, it has been from the aisles of a big-box retail store.

Finally, Barnes and Noble has an Amazon-esque website with free shipping for members, which means if one wants to a trade that they don't have in stock, one can get it pretty quickly, without having to deal with the vagaries of Dimaond.

So, were I a retailer, I would consider Barnes and Noble a real rival, especially since one can return to the same place they picked up that digest full of Antman and Wasp comics, head to the back of the store, and then buy all the Ant-Man or Avengers trade collections they want, or go online and order them from bn.com, without ever even considering setting foot in a comic book store. Walmart? They've just got a coupla dumb DC anthologies racked next to the Pokemon cards.

But then, I am not a retailer. My only participation in the comics market is as a consumer, which is a much, much easier job than that of the retailers.

Anyway, Marvel Comics Digest seems like a pretty okay gateway comic, and I'm glad it exists, even though it's definitely not for me, and my huge, clumsy man-hands and failing adult eyes.
Posted by Caleb at 4:38 PM

There was a piece at the Beat recently about DC's marketing initiatives and I found it very persuasive.
DC -- unlike Marvel -- has Zoom, Ink and Walmart -- all trying to find audiences outside middle-age (and older) fanboys. These initiatives clearly are aimed at the YA book audience, trying the French/European GN model and, uh, dumping cheap stuff on what you can call an audience that doesn't go to comic book stores. All credit to them and wishes of much luck.
That said, I don't know whether it's all too late. Dunno that the potential market for the Big 2's material is all that big at best. That the movies make magnitudes more than publishing every did doesn't mean there's a huge untapped market (yes, as opposed to a small untapped market).
The bang for the buck of comics is awful. And the books aren't all that attractive to justify the money.
Two other points I took away: Minor: The Walmart thing appears to have like no overlap with the comics store market. So nothing for retailers to stress over.
The other thing is the whole idea of the monthly, continuing adventures. With a massively shrunken audience, does it really pay? Other than R&D for movies, instead of, say three or four monthly Justice League books, hows about a couple of big ass GNs a year?