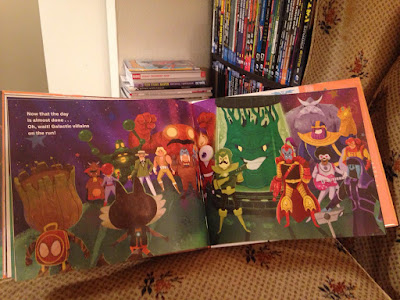 So I just read Brendan Deneen and Cale Atkinson's First Day of Groot (Marvel; 2019), and while the rhyming text didn't do much for me (I'm obviously not the target audience for this picture book), the artwork is a delight. Atkinson draws the entirety of the Marvel Cinematic Universe, from Iron Man and Captain America to Spider-Man and Captain Marvel, and his Avengers are the best. The pages are full of fun little Easter Eggs referencing Marvel lore, too, from the Aunt May-brand pancake mix the legendary Star-Lord is whipping up in the Guardians' galley to the copy of Hulk's Mystery Tales that Rocket is reading (featuring The Hulk dressed like Sherlock Holmes on the cover). And hey, scan each image extra carefully, as there's a tiny little Ant-Man or Wasp hiding in each of them...except for the ones where they are full-size, like at The Avengers picnic.

Anyway, near the climax, after the heroes have used teamwork to deliver a humiliating defeat to Thanos, there's this spectacular two-page spread, which is accompanied by the words:


Now that the day
is almost done...
Oh, wait! Galactic villains on the run!

It's too big to fit on the bed of my scanner, hence the photo. I've scanned the two halves of the image and will place them below, because I am afraid I am unable to name many of what appear to be Marvel's most awesome villains.

Here are the images: 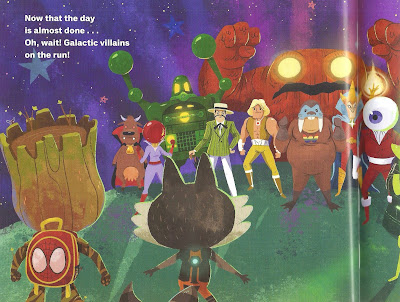 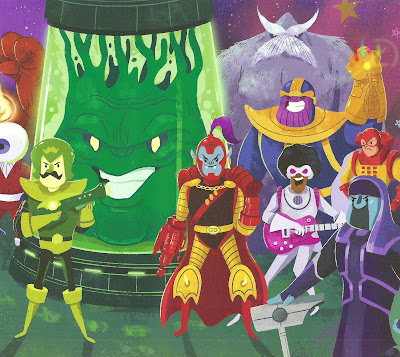 Okay, so we all know the three big guys in the background are Orrgo, The Supreme Intelligence and Xemnu, The Hulk (AKA Xemnu, The Titan), here sporting an amazing mustache (the result of his eyebrows and mustache being colored differently than his fur, I think). Oh, and then there's Thanos, obviously, who seems to have recovered the Infinity Gauntlet that the Avengers stripped him of a few pages ago.

As for the rest, let's go left to right, and you can tell me who the heck the ones I can't identify are. Ready...?

5.) (Square-Jawed, Long-Haired Guy With Vest Over His Bare Chest) The Kangaroo

9.) (One Of The Green Guys Shown Hanging Out With Nebula Earlier In The Book) According to artist Cale Atkinson, this guy is an original creation.

Thank you for your help in this matter.
Posted by Caleb at 7:31 PM

I have a few guesses:

That's all I got right now.

(7), I think, is the Demon -- an old Dr Strange villain? Or else some other Ditko creation (the helmet and hands are a giveaway)

5.) (Square-Jawed, Long-Haired Guy With Vest Over His Bare Chest)
The Kangaroo

#10 is definitely the original Taserface from Jim Valentino's Guardians of the Galaxy, and #4 has gotta be the mighty Turner D Century...

#12 - the Phone Ranger, first appears in the Marvel Age Annual

#9 - I was going to guess it was Gunthar, a Rigellian member of Nebula's pirate crew, but he doesn't look much like a Rigellian ... and Gunthar didn't have a mustache :/

Wow, thanks! You guys fairly flew through that list! Now that I have names to attach to many of the face, I'm kind of embarrassed to find out that I actually DID read comics featuring some of the character's I didn't recognize, and then apparently my addled brain refused to form any memories of them.

I am now irrationally excited to learn more about Turner D. Century and Taserface, who I guess was in the second GOTG movie, and they certainly didn't do his fantastic costume any justice there...