Who Will Actually Be on Brad Meltzer's Justice League 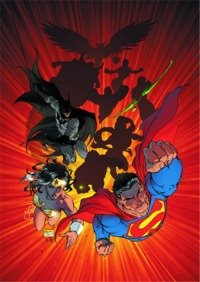 The cover to Justice League of America #2—or at least one of the covers for it, as DC seems to need at least two covers for every new book these days—has been out for a while now, showing ten shapes on it. Meltzer said his League will will consist of ten characters initially. Which means that more than likely, the cover features the new members of the Justice League, we're just not positive who they are just yet. Michael Turner's expressisionistic art won't make guessing any easier, nor will the fact that DC could be cheating (by coloring that bow green instead of red, for example). But here goes anyway: