Marvel Zombies may just have been the best idea Mark Millar’s ever had, even if it wasn’t him but an editor or marketer who came decided to apply the derogatory term form Marvel fans to the zombified versions of superheroes that Millar used in his brief Ultimate Fantastic Four run.

In the early years of the twenty-first century, what was popular in our pop culture? Well, there were superheroes, of course, and zombies. Why not put the two together? It’s a pop culture Reese’s Cup.

I imagine Millar, sitting atop his easy chair stuffed with un-cashed royalty checks from Civil War and Ultimates trades, brooding that he didn’t write that Marvel Zombies miniseries himself, or maybe pitch the zombified superheroes idea to Hollywood, where the real money is. Perhaps he strokes his chin, and tries to think of another idea as good (and profitable). To, in other words, come up with the next Marvel Zombies.

His bosses have certainly been trying to come up with the next Marvel Zombies themselves, and at a convention a few years ago, someone in the audience suggested “Marvel Apes.” Editor-in-Chief Joe Quesada’s been talking about it on panels and interviews now and then ever since, and at last weekend’s New York Comic Con he finally announced Marvel Apes, complete with a creative team and an image: 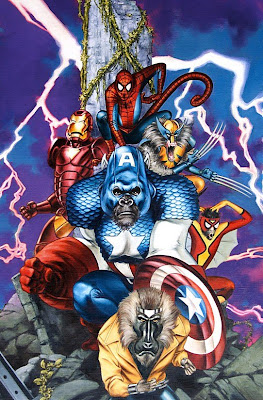 Fan reaction has been a bit mixed. (My own is that Karl Kesel is a quite capable writer who handles fun comics well, although Marvel’s attempts at silly humor in the recent past have tended to be painfully unfunny).

Many have pointed out that it sounds an awful lot like “JLApe,” the 1999 DC storyline that ran through the Justice League-related annuals, and dealt with the Leaguers being turned into gorillas.

Others have noted that ape-based super-comics seems to be more the forte of Marvel’s rival, DC. After all, if you want to read a super-comic that deals heavily with apes, you’re going to want it to come from the company that gave us Gorilla Grodd, Gorilla City, Angel and the Ape, Congorilla, Titano, Detective Chimp, Monsieur Mallah, The Ultra-Humaite and Beppo the Super-Monkey.

The DCU is the kind of place where the heroes often find themselves transformed into gorillas, forced to fight gorillas wearing their costumes and using their powers, battling against winged gorillas or playing baseball with gorillas. It’s a place where gorillas can dress up like Indians and shoot bows and arrows,explore space, practice witchcraft or even marry Jimmy Olsen.

While the “JLApe” story is the one that springs most immediately to mind when thinking of a comic book company publishing a story in which their premier super-team gets turned into apes, it’s not the only time DC told a tale with an all-ape super-team within the past ten years.

No, there’s also “Crisis One Million” a short story included in 1999’s DC One Million 80-Page Giant #1,000,000 which should prove extra-pertinent with Final Crisis right around the corner. After all, it has the word “Crisis” in the title and it was written by FC scribe Grant Morrison.

That 80-page giant, like all of those in 1999, was an anthology made up of shorter stories. These all revolved around the 853rd Century as depicted in Morrison’s previous DC crossover story, DC One Million.

The highlights are the two Morrison tales–one featuring the introduction of that era’s Atom (drawn by Cully Hamner), the other featuring the super-apes (drawn by Dusty Abell). Also included in the book are a “System’s Finest” team-up tale by Mark Millar and the late Mike Wieringo and “Tales of the Legion of Executive Familiars” by Marck Shcultz, Georges Jeanty and Dexter Vines, a story that introduces Krypto-9 and his all-animal super-team. (The rest of the book’s not-so-hot, but there’s some nice art from Flint Henry, Norm Breyfogle and Phil Jimenez in it).

But getting back to the apes, “Crisis One Million” opens with Superman and Owlwoman finishing up a trade discussion with Supwerwoman of the Qwardian Reversoverse’s Super-Syndicate (I did mention this was by Grant Morrison, right?)

But Superman’s descendant and his fellow heroes in Justice Legion A receive a distress signal from Titano, the leader of the Gorilla Galaxy’s Primate Legion! 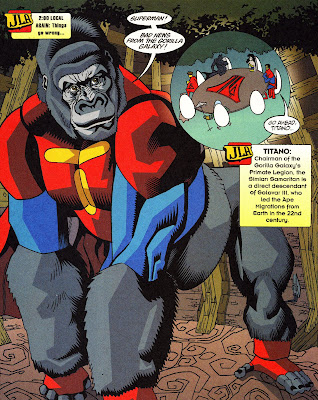 As you can see, this Titano is a giant talking gorilla in a Superman-like costume. And he has all of Superman’s powers.

Apparently, the two teams’ home galaxies are hurtling close to one another at incredible speeds, and will shortly strike one another, obliterating both. Here’s some more of the Primate Legion: 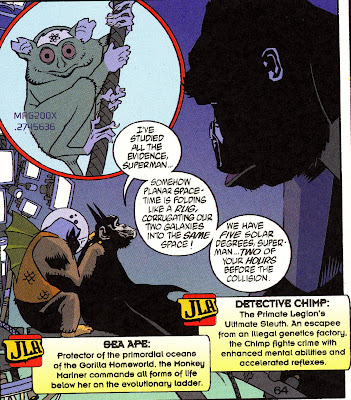 Superman speeds off to try and hold the two galaxies apart, while Batman and The Flash concoct a plan to use the Celestial Treadmill to create a reverse-time field to smooth out the wrinkle’s in time created by the Gorilla Galaxy’s massive gravity. But, unfortunately, all of hypertime has begun to fold together, bringing legions of alternate Justice Legions together, leading to two or three pages of Elseworld characters fighting (Characters from Superfriends, the Tangent universe, Kingdome Come and so on slug it out for a few panels; kind of like Arena, only as a brief lark rather than a serious multi-part storyline).

Superman uses his force-vision to try and slow the oncoming Gorilla Galaxy, and Titano arrives to back him up with his own force-vision. 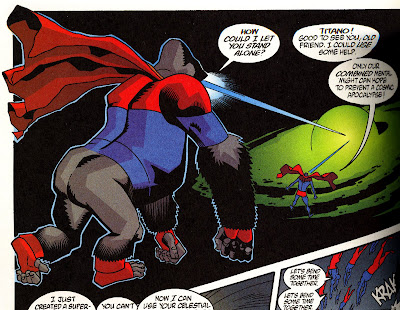 Back in JLA headquarters, Owlwoman realizes it was Superwoman’s activation of an ancient JLA artifact that set-off the sequence of events, and she’s able to save the day (with an assist from Flash and the Atom).

The Primates make one last appearance, as Titano and Superman discuss the styles of humor prevalent in their two galaxies.

And check it out—Sea-Ape is one of those monkeys that sound like Jimmy Durante in old cartoons. 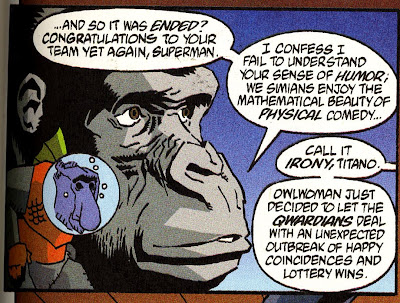 By the way, that entire “Crisis” story? It’s just ten-pages long.
Posted by Caleb at 2:42 PM

I must admit that this story sounds fabulous. I also agree that when you mention "superheroes" and "apes" that DC is certainly the company that springs to mind. Wouldn't it be nice if Marvel could come up with something...oh...say, original?

That cute Atom superwhatsit is, I believe, a bush baby, a primitive primate found in Africa.