German air ace Baron Hans von Hammer, nicknamed “The Hammer of Hell,” was one of the most accomplished pilots of World War I. In his custom crimson tri-winged Fokker Dr.I, von Hammer was virtually unstoppable in the air, a human killing machine responsible for over 100 confirmed kills in a four-year period.

On the ground and outside of his cockpit, however, Von Hammer’s reputation haunted him. The pilots that served under him in his Jagdstaffel kept their distance, whispering about their emotion-less leader from afar. The pride of his personal valet and his people had in his exploits irritated him. The women who would dare to get close to him would become overcome with fear, chilled by the very touch of his lips.

His only friend in the world was a large black wolf that prowled the Black Forest at night, another lonely born killer.

By all accounts, he was an extremely dark, cold, brooding man.

What made him like this? Was it the fact that he led so many young men to their deaths, yet he himself always seemed to survive? Was it the number of noble, skilled pilots he himself gunned down, simply because they happened to fly under another flag? Was it simply the deleterious effect of war on the noble soul of a noble man?

Perhaps. Or perhaps it’s because in the middle of this brutal war he had to bury his puppy. 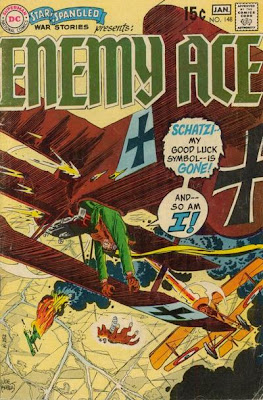 It happened in Star Spangled War Stories #148, in a story entitled “Luck is a Puppy Named Schatzi!” by the original Enemy Ace creative team of Bob Kanigher and Joe Kubert (Conveniently collected in Showcase Presents Enemy Ace Vol. 1, one of the best collections in the series so far).

As you can see by the cover image, this is a seriously dramatic story. Not only is our dark, tragic, Byronic protagonist getting all shot to hell high above the earth in a fragile, upside down airplane, but he’s dropped his puppy! His injured puppy! Jesus!

The tale begins on the Jagdstaffel of Rittmeister von Hammer, where a curious, hungry stray puppy is curiously inspecting the parked airplanes. Suddenly, out of the sky swoops Von Hammer and his pilots, coming in for a landing. 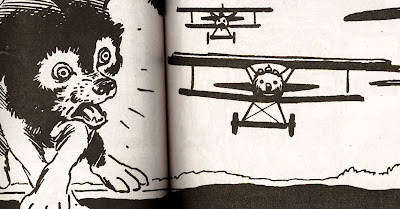 The puppy runs for cover, but, alas, not fast enough. Yes, this is a story which begins with a puppy being run over. And things are only going to get worse from there.

Von Hammer doesn’t spot the puppy until its too late, and dives out of his plane to find the little animal beneath one of his wheels. He’s overjoyed to find that, though wounded, it lives. 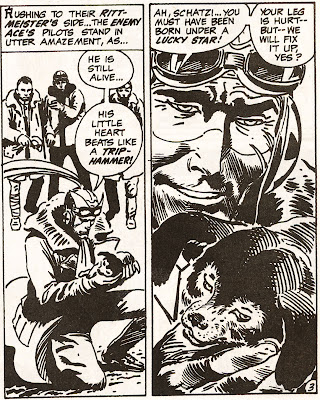 This is only the third page of this story, but it’s the 317th page of the Showcase Presents collection. And I’m pretty sure it’s the first time Von Hammer has cracked a smile in the whole thing.

The other pilots are just as surprised to see Von Hammer happy: 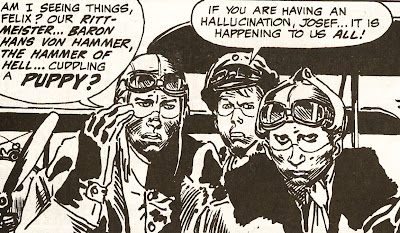 "Schatzi," by the way, is German for sweetie, sweetheart or honey which, obviously, doesn't sound like the sort of name one would expect the Hammer of Hell to come up with for a pet. 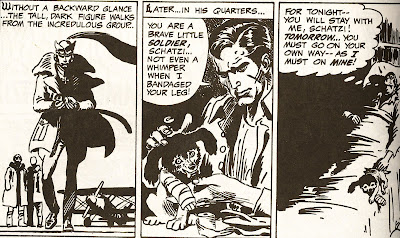 He takes Schatzi to his quarters, bandages his leg, and even takes him to bed with him. 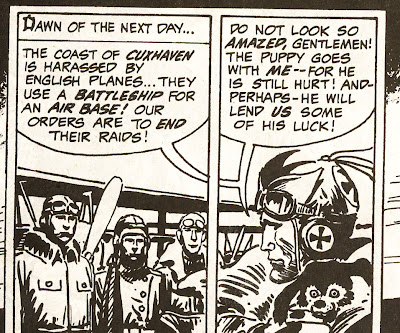 The following morning, he addresses his men on the runway, informing them that Schatzi will be accompanying them on their mission to take on a battleship off the coast of Cuxhaven. They take on a trio of British Sopwith sea-planes, a battle which costs him his young pilot Kurt, who was only on his second patrol, then buzzes a battleship, luring the British planes into smashing into their own ship and blowing it to blighty.

Schatzi tries his best to be as brave and determined-looking as his new master. I love these panels, which are exactly like the scores of other panels of the grim Enemy Ace that Kubert has filled these stories with, except, of course, the presence of a puppy in each of them. 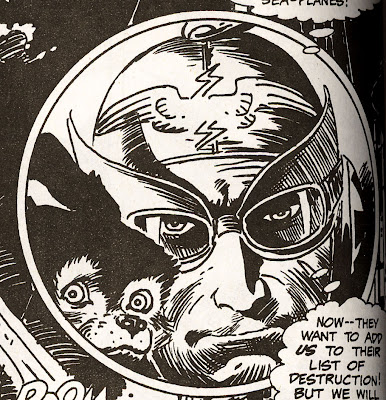 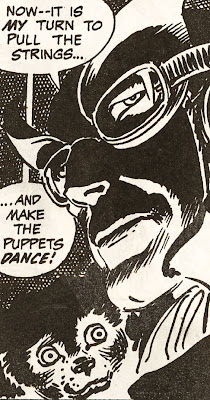 After touching down, the soldiers rush to congratulate him on his victory, but Von Hammer cuts them short as usual, reminding them of the cost of such a victory… 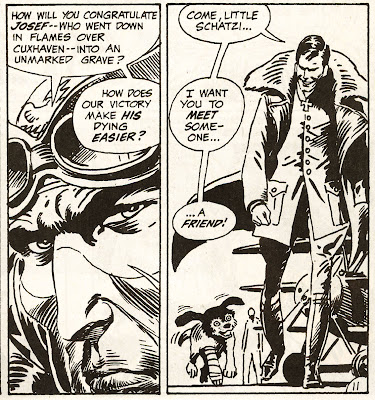 …before grinningly widely and leading his new little friend off to meet his only other friend. 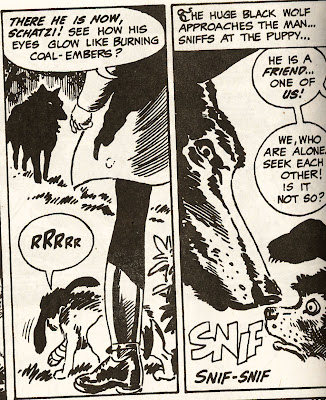 Despite what Von Hammer says here about them being three of a kind, I’m not so sure I buy it.

It’s not just solitude that unites the wolf and the Enemy Ace, after all. It’s also the fact that they’re born killers. Still, I love this panel of the trio striding side-by-side through the forest (For some reason, I hear this song in my head when I look at that panel).

Schatzi, all tuckered out from his long day of air-battles and wolf-meeting, falls asleep in Von Hammer’s arms, and the two killing-machines part ways. 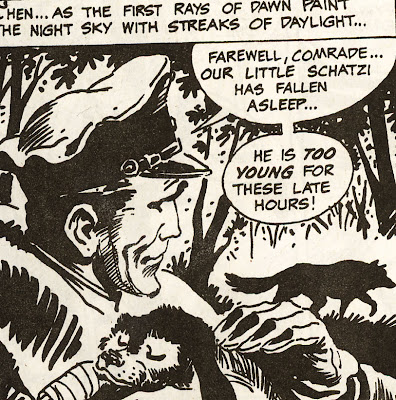 But back at the Jagdstaffel field, an urgent message has arrived, ordering Von Hammer and his pilots to provide air support for the German infantry driving into France.

The baron tucks his little friend into the collar of his coat and flies off into the rain, telling him there’s no crying in World War I.

At this point, you can kind of see that Schatzi is beginning to realize what he’s gotten himself into. I mean, look at that “oh shit” look on his face in that last panel there.

As soon as the storm clouds part, a storm of lead replaces it, driven on by British fighters.

Schatzi finally proves himself a good co-pilot, warning Von Hammer of an enemy plane just in time to save his life. 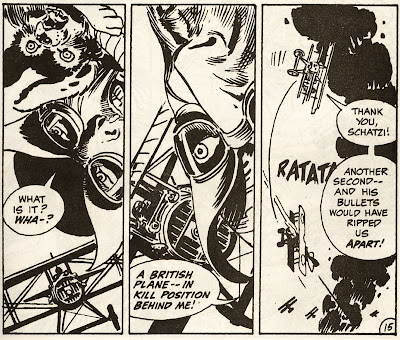 And then it happens:

Can even the Enemy Ace pull off the aerial acrobatics necessary to somersault below the plunging pup and catch him?

No, no he can’t. The cute little puppy totally falls to his death.

and then, then, then... if you thought fighting against Enemy Ace on a normal day was scary, you should see him after he loses a puppy. He-- well, let's let Kanigher take it from here...

“Like a madman, the Hammer of Hell tears into battle—wreaking a terrible havoc…

The carnage ends only when the baron runs out of ammunition, and the few surviving combatants limp back to their bases. But not Von Hammer.

Back at his Jagdstaffel, his men wonder wehre he has gone. One says that “he flew like an Avenging Angel of DEATH!” and then landed “amidst the dead below! It—it was horrible! Like something out of Dante’s Inferno! Perhaps… he landed to confirm kills!”

But no, he has landed in the graveyard of No Man’s Land, picking through the dead until he can find the body of Schatzi, and gives his fallen friend a true pilot’s burial. 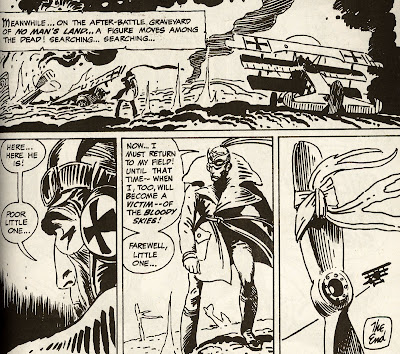 The skies are truly the killers of us all, and, in war, no one is safe! Not even puppies!
Posted by Caleb at 4:27 PM

That really gets me right here.

That settles it. I'm getting that Showcase: Enemy Ace book today!

The Hammer from Hell better pray that the CSPCA doesnt find out he took a Puppy up in a fighter plane without a proper puppy restraint, else he'll really find what furry looks like. Those animal activist types make huge black wolves look relatively timid is all I can say.

Holy hannah, that was rugged.

I must own that Showcase.