The Other Secret Invasion: Millennium #5

Now that DC has finally done the right thing—with "the right thing" being here defined as "something done mainly to be dicks to those bullies over at Marvel who are always making fun of them about market share"—and released Millennium in a handsome, re-colored trade paperback, there's not really a whole lot of incentive to keep doing this monthly looks at 1988's weekly series which bears some conceptual similarity to Secret Invasion.

I mean, if any of you are terribly interested in Millennium and want to know whether the Manhunter androids defeat and destroy all of DC's superheroes or not, you can just go get a copy of the trade and find out for yourself. Like Sally has. (Although she may have just bought it because of Hal Jordan's sexy Green Lantern pool party; for a DC crossover, this thing does have an awfully high Green Lantern-butt-per-issue ratio).

Of cousre, I'm already halfway through this thing, so at this point, I should probably just soldier on through the back half. It's not like it's going to be any worse than the first half, right?

Let's see, what do Steve Englehart, Joe Staton and Ian Gibson have for us this time... 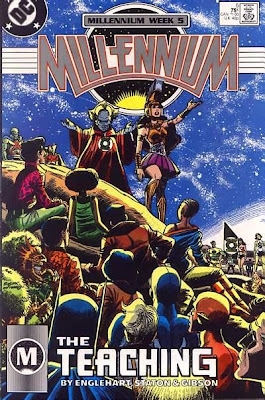 Teaching! This is the issue that will contain teaching! It says so right there on the cover! Man, this is going to be the best issue yet!

So, what are we going to be taught, exactly? 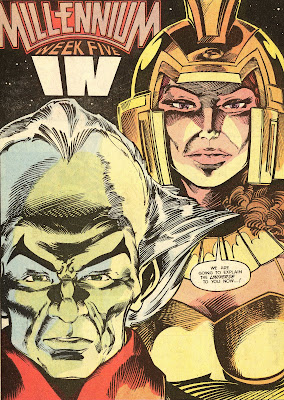 Uh oh.This is going to take a while, isn’t it?

Yes, the immortals Herupa Hando Hu (left, blue) and a Nadia Sefir (right, peach) sit their eight chosen ones down in Hal Jordan's back yard to explain the entire universe to them.

The explanation is going to start out heavy on the Philosophy 101: 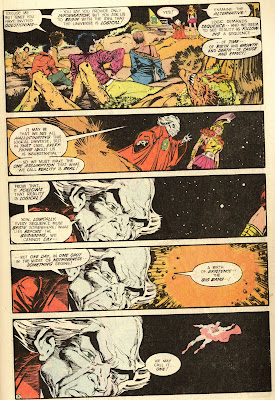 (Please note Gregorio in the top panel; as the first and flamingest gay super-character, his portrayal throughout this series is actually the most interesting and relevant aspect of Millennium today. Just to remind us that he is soooooo gay, his hand is on his hip at all times. Even when he's reclining on the ground).

Okay, so nature of the universe, logic, philosophy...where do the superheroes come in?

Here's Superman, talking to himself and then, realizing that he was talking out loud to himself, switching to thinking to himself, which is a much less worrisome habit for the most powerful man in the world to display. He thinks about his own adventures thus far during the line-wide Millennium event, most of which will have occurred off-panel if you are reading this for the first time in trade. This leads directly into the climax of the entire series: Superman walking in on some kind of crazy congratulations surprise party for Batman... 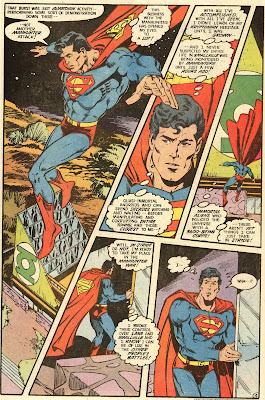 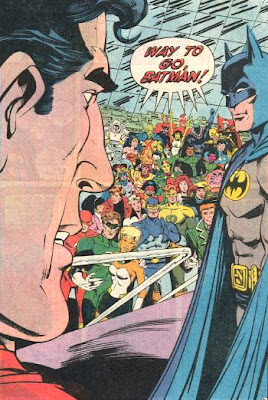 Mike Sterling already discussed the above splash page at his site earlier this week, and both he and his commenters pointed out some of the awesomeness and some of the context.

Outside, Nadia follows up HHH's speech about the concept of one with a panel about the conecept of two, which means the universe is basically all about counting, and then we see inside Batman's head a bit regarding his rivalry with once and future BFF Superman... 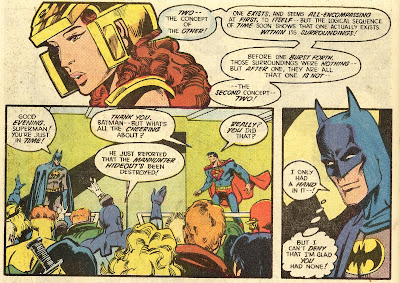 Batman and Captain Atom and the Spectre catch us up on what happened in their tie-ins—Batman couldn’t find Shaw but ran into Jim Corrigan, and together they resuced the Manhunter hostages before temple exploded; Captain Atom and Firestorm were fighting one another do to some Manhunter mix-up madness, and were able to save the others from the explosions; the Suicide Squad was around but Cap is keeping 'em secret from the assembly—and then we cut back to the immortals, talking about another number, and we see a remarkably on-the-ball President Ronald Reagan, thinking on his feet: 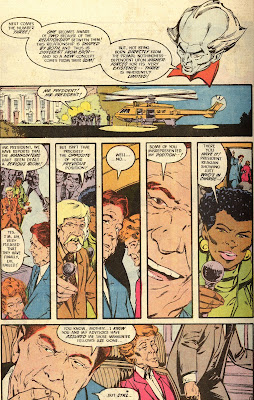 Man, Reagan gets a lot of panel-time in this thing. He's had more lines than Wonder Woman at this point, I think.

Aside from the teaching—the numbers four through 9 are covered in similar fashion—the main non-lecture action is when Aquaman and Aqualad show up at Hal's pad and bring the assembled superheroes a flying saucer they found. The presence of the saucer gets the superheroes thinking. Even if Batman and company seem to have defeated the majority of the Manhunter andorids in the tie-in adventures they had in their own books, they could always send more androids to Earth. The only solution, then, is to fly to the Manhunter world and, I don't know, destory them all.

This sounds a bit extreme to me, like England deciding after they defeated the Spanish armada that the only way to protect themselves form future Spanish agression would be to travel to Spain and kill every single person there, but what do I know, I'm not a superhero, and Manhunter androids aren't sixteenth-century Spainards.

The Manhunter Kill Krew consists of Superman, Captain Atom, Firestorm, Martian Manhunter, The Hawks and a trio of GLs, with Dr. Fate providing magical transport. Will they be able to broker a peace treaty, or will they commit genocide? We'll have to keep reading to find out.

Meanwhile, on the Manhunter homeworld, Harbinger is still being held hostage...at least until help arrives, in the form of some kind of crazy zombie Green Lantern who talks a bit like Bloom County's Bill The Cat: 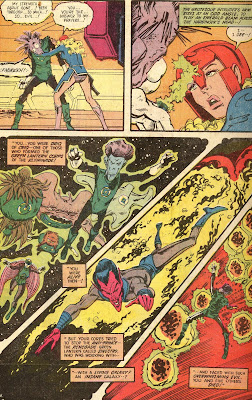 Hmmm...a zombie Green Lantern. DC should really do something with that concept in the near future...

Finally, the immortals explain the number "ten" to their chosen ones: 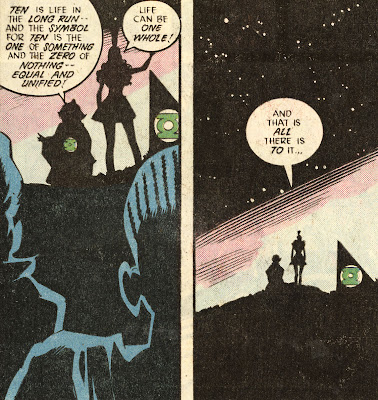 Profound! And, as Nadia says, that's all there is to the universe. The chosen ones are now ready to move all of humanity forward by becoming the worst superheroes of the past 2,000 years, a process that will take roughly three more issues to complete.

Hee! Now that I've bought the Millenium collection, I actually know what you are talking about now!

And yes, there IS a rather high ratio of Green Lantern behinds sprinkled throughout the books, which in my opinion, is about the only thing that kept me going.

I don't know WHAT Englehart was smoking when he came up with the "lessons" one through ten, but it must have been some serious stuff. Because I am sometimes a masochist, I actually went back and tried to make sense of what Harupa and whatshername were bloviating about...and couldn't make heads or tails of it.

It's all a lot more fun if you keep making sarcastic remarks throughout the entire reading.

Englehart is responsible for a LOT of hippie comics stuff.

As for continuing despite the trade being available, I think you should. I HAVE the original series, and EDILW is the perfect commentary track for it.

Actually better if you HAVE read it. Rock on.