This comic filled me with a deep sense of existential dread. It is written by Jeph Loeb, so I expected some sort of negative feelings to surface during the reading experience (and be mitigated by the fact that this volume features the Defenders drawn in Ed McGuinness’ Masters of the Universe figures-filled-with helium style), but I wasn’t expecting to end up pondering the lack of meaning in comic book superhero adventures—heck, in life itself!—before I was half way through the collection.

I’m well aware that comic book characters like The Hulk aren’t really real in the way that you and I are real, and that what occurs in comic books featuring him is merely whatever the editors, writers and artists want to have occur to him. He’s a character, a license, a logo, forced to dance to the whims of whoever happens to be collecting paychecks in return for making him dance for our enjoyment in any given month.

To what end? Well, whatever other goals or motivations certain creators may have, it is ultimately to entertain readers, I suppose, enough so that they will pay another $3.99 the following month for more of the same.

That’s true of all corporate super-comics, but I can’t remember ever having read one that was as obvious about it as the opening three-issue story arc collected in this volume.

The Grandmaster, a cosmic god of the Marvel Universe, tells our hero that he can give him back a dead past love of his (Jarella, as referenced in a brief, three-page flashback) if The Hulk promises to fight to the death in a game of his.

The Hulk agrees, and hand-picks a team: Namor, Dr. Strange and The Silver Surfer, each pulled from the moment in their pasts where they similarly lost their lady loves, and given the same deal.

The Red Hulk, meanwhile, is playing for The Grandmaster’s brother, The Collector, and has put together his own team of evil opposites, The Offenders: Baron Mordo, Terrax and Tiger Shark.

They fight for a couple of issues, Marvel villains enter the fray, things occur with little rhyme or reason (for example, a two-page splash—of a $3.99 comic book!—is devoted to Tiger Shark chomping on Namor’s throat with admantium teeth, but the Avenging Son doesn’t even suffer a wound), and ultimately The Red Hulk kills everybody, and everyone then gets brought back to life with their memories wiped of the entire event.

So three issues later, nothing has changed for any of the characters at all, and it was as if the story arc never even happened.

At least I got to see McGuinness draw Namor though, and, of course, there’s this: 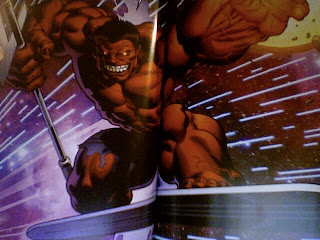 That is fantastic. Jeph Loeb got paid in U.S. dollars to write something like:

Red Hulk is on the Silver Surfer’s surfboard, holding Terrax’s ax in one hand and shooting the power cosmic out of his other hand while flying through space.

RED HULK: Most fun I ever had with my clothes on!

That fact is honestly a more awe and wonder-inducing than any event that occurs within the story.

After the Defenders vs. Offenders trifle ends, Loeb and McGuinness get back to the business of teasing the Red Hulk’s origins. Incredible Hulk #600 was the issue solicited like so:

WHO IS THE RED HULK?! THE AMAZING SPIDER-MAN IS GOING TO TRY AND FIND OUT! GREEN HULK! RED HULK! SPIDEY! SECRETS REVEALED!

Sort of makes it sound like it would be the one revealing Red Hulk’s true identity (Betty Ross. It has to be Betty Ross, right?), doesn’t it? It does no such thing.

“Seeing Red” opens and closes with Ben Urich, the only reporter in the Marvel Universe, in front of his type-writer, banging out a “This story will never see print” story, about how government conspiracy he stumbled upon, revealing that a military agency is actually the invention of MODOK and AIM, and dedicated the research of Hulks. Spider-Man, She-Hulk, Doc Samson and Rick “A-Bomb” Jones all guest-star. Red Hulk’s origin and identity remain undiscussed, but Bruce Banner loses his ability to transform back into the Hulk after all of his gamma radiation is sucked out of him.

Finally, in the title story, “Hulk No More,” Norman Osborn attempts to find out whether or not Banner can turn into the Hulk any more…by having Ares attack him.

These last two stories seem oddly disconnected from the first one, which has nothing to do with it save the presence of the two Hulk characters (and the creative team), so the book reads a bit like some sort of graphic novel version of a flip-book, rather than part of a unified, ongoing storyline.

Despite its soul-troubling meaninglessness and Loeb’s…Loeb-ishness, looking at McGuinness playing with Marvel character designs old and new isn’t a bad way to spend the better part of an hour. Of course, I say that as someone who read Hulk No More in a trade I borrowed from a library.

I imagine I wouldn’t feel the same if I dropped $16 on it, or the…let’s see…$21 it would have cost to read these stories in single issue format. There’s an awful lot of splashes and double-page splashes, and a real scarcity of story for such expensive comics.
Posted by Caleb at 6:44 PM

I say anyone stupid enough to spend $4 on a 22-page Jeph Loeb-written comic deserves exactly what they get.

That #600 is the one where I stopped following Loeb's "Hulk", deciding that it has stopped being amusing enough to justify following the bloated crossover it was leading into. And the sales followed suit - it seems that the last time Hulk books had genuine support was during World War Hulk. And really, Planet Hulk that it was spun off was an actual story built up from a gimmicky foundation into something that worked despite the artistic changes.

On the other Hand, it convinced Marvel to rethink the Hulk franchise, and separate it in several different books. The moment the art-centered "Hulk" turned into a flagship for the eventual crossover picking up from the ruins of "Planet Hulk"'s underdeveloped "Scar" follow-up, was the moment I felt where the book got the furthest from any sense of advanced storytelling.

It seemed that faced with failing sales, the editorial circled the wagons of it's Hulk titles and tried for a one last ditch effort in maximizing on the franchise built from one single momentarily successful book five years ago. I hope that a severe rethinking of the property follows the crossover.

>...revealing that a military agency is actually the invention of MODOK and HIVE

Someone's been reading too many DC comics and his initials are J. Caleb Mozzocco.

>...revealing that a military agency is actually the invention of MODOK and HIVE

Someone's been reading too many DC comics and his initials are J. Caleb Mozzocco.

Oh yeah, wrong evil organization, huh? I guess the beekeeper outfit made me think of bees, which live in hives?

Anyway thanks, I'll fix it.