Last month I visited a store in my hometown that specializes in magazines and newspapers, selling lottery tickets, candy and gum and beverages alcoholic and not. When I was a kid, it had two spinner racks full of comics.

I was surprised to see that it still carried comic books, which now took up a few shelves close to the floor, at kids' eye level, among the magazines. I took a picture of their comics selection: 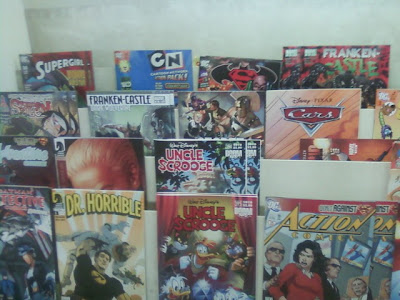 I noticed a few books that were still quite new—the Scooby-Doo book and the Shadowland issue, for example—but I was struck by how old and out of date most of the books seemed. After a half hour or so searching around comics.org, I put together a partial list of what they carried. I've noted the cover date where possible—and cover dates are usually a month or three ahead of the month when the books actually get released into direct market shops—and, where I couldn't find a cover date, I looked up on-sale dates.

Either way, not only were there some really old comics, but there was a really rather random assortment:

A lot of Boom Kids books, a lot of DC (and Johnny DC), a good amount of Marvel and two Dark Horse books but, man, could you imagine trying to follow comics only by buying them off a rack like this?

This store, incidentally, is the only one in town that I know of that sells any comic books, although I imagine a few of the big box-type stores like Super K-Mart and Wal-Mart likely have similar selections somewhere in their magazine racks.
Posted by Caleb at 2:08 PM

So the question is, how do kids buy comics if they can't get to a LCS? Do they even read comics anymore? Do they download them illegally? Do they get them through subscriptions? I used to buy comics at a store like that 30 years ago; the store's now closed.

A magazine shop that I go by every few months has a spinner rack in the window that has a few old Valiant comics (I recall an issue of ARCHER & ARMSTRONG), a GENERATION X, an issue of POWER OF SHAZAM!, old Superman titles, ROBIN and other crazy old comics. It never changes, and it never moves.

I assume somebody missed the due date for these books as stripped cover returns. Alternately, they may buy them on the cheap from the overstock of a comic shop. Regardless, the art form lives on, and I'm sure kids still get comic books from their geeky uncles, but the days of these things being anything but a niche market item are long over.

I totally approve of Scrooge and Scooby Doo, awesomeness.
I could buy those kinds of things whenever I want at random, I wish others would be like that !

If 2009 comics are old to you, I can't imagine what d'you think of the comics in the local store here :/
(we still have some world war hulk issues around! :P)

Here in the UK, we don't get US imports in newsagents anymore, but we do have US reprints that give you 2 modern (about a year or two behind) and 1 Classic (mostly 60s-70s) Marvel/DC comic for the price of 1 US import. They got me back into superhero books about 6 years ago, but I stopped getting them when I caught myself up with imports. I can totally see kids getting hooked on these. Because the Modern reprints are all from the same time "Keeping Up" doesn't matter so much, they've even done crossovers. Most places will stock the 1 or 2 tittles (I think there's about 4 Marvel and 2 DC in total).

We also Have 2000AD, Judge Dredd Megazine and CLiNT, for older kids/adults and a whole stack of cartoon tie-ins and Beano stuff for the little'ns, so we're actually doing better than we have in years.

2badguys is dead on, the UK newsstands are packed with comics, though you never see DC/Marvel/etc imports any more, those Titan/Panini reprint packages having taken their place.

They differ from most comics in that they acutally are comics - the rest of the juvenile market tends to be bagged 'free gifts' with the comics seemingly an afterthought.

I dunno about the other people, but I rarely actually see copies of 2000ad in most newsstands I go to.