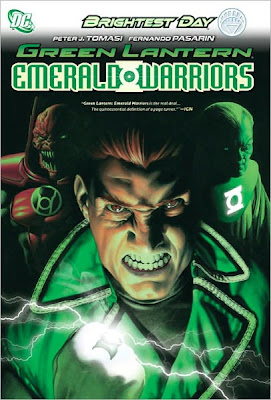 Even coming off the high of the Blackest Night line-wide crossover in fall of 2010, adding a third Green Lantern monthly series seemed a little overzealous on DC’s part. Superman and Batman only sustained two ongoing monthlies apiece the first 40 years or so of their existence, after all, and the Green Lantern franchise was only a hot one for about five years at the point that they launched Green Lantern: Emerald Warriors, written by Green Lantern Corps’ Peter J. Tomasi and drawn by Fernando Pasarin.

That they launched it at the Marvel-established $3.99 for 22-pages of story price point (Exhibit Y of DC stealing only Marvel’s worst ideas) seemed like market suicide.

Well, as it turned out, the price was quickly adjusted, with #6 dropping down to DC’s $2.99/22 price point, and yet the book was still rather quickly canceled, with #13 being the last issue shipped.

The cancellation, however, seemingly had little to do with there being too many Green Lantern books on the market, but rather with the “New 52” reboot. This particular title didn’t survive, but post-reboot there were four Green Lantern books (GL, GLC, Green Lantern: New Guardians and Red Lanterns, if you’re curious), and the characters and plotlines all survived un-molested.

This collection includes the first seven issues of the series, a storyline that spins directly out of Blackest Night and directly into the “War of The Green Lanterns” crossover series, as Tomasi takes Green Lanterns Guy Gardner, Arisa and Kilowog right where he left them at the end of the “Blackest Night” arc in GLC, teams them up with the goofiest looking Red Lantern, and sends them off to investigate a mysterious event that leads to the villain of the next crossover.

(I’m curious to see how the rest of the series gets collected, as #8-#10 are chapters of “War of The Green Lanterns,” and will therefore likely be collected interspersed with the rest of the comics hosting the other chapters, and then there’s only three issues left of the series, which isn’t enough to fill a trade collection).

I haven’t read any of the post-“Blackest Night” issues of GLC, so I’m not sure if it managed to sustain the intense level of insanity that it had during that story arc (although I sincerely doubt it, given that the stakes would necessarily have to stop escalating at that point), but Tomasi certainly seems to have focused a lot of the bizarre gore and aggressive gross-out moments that characterized that storyline into this new book.

The pacing is much more leisurely, as the trio of Lanterns fly off on a journey into the lost sectors of the universe, where they investigate the presumed death and/or resurrection of one of their own, and a gradual drain on their power rings.

The villain responsible, a sub-villain who gets defeated in this story arc, who serves the villain of “War of the Green Lanterns,” is a big, tall alien with three eyes, long white hair, clothes that look like they were stolen from the closets of an Aztec high priest and Shiva, and a flaming sword made out of bad memories (I think he’s an old Green Lantern character, but I couldn’t tell for sure). He’s also got a bunch of snakes of various sizes, furthering his resemblance to a living version of the sort of idol Indiana Jones might come across. 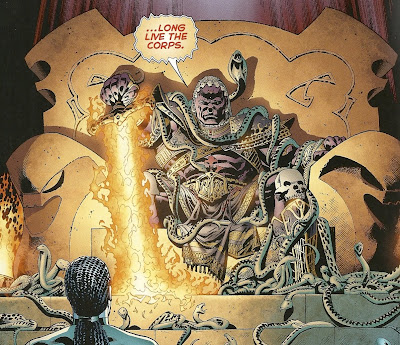 He’s psychic, and captures and imprisons other psychic aliens in a bizarre but visually arresting manner in order to increase his psychic powers. His plan is to take over the minds of a bunch of Green Lanterns.

I mentioned that the Green Lanterns are teamed up with a Red Lantern in this story (Also, the Blue Lantern who is basically just Ganesh with a trunk tattoo makes a brief but welcome appearance). She’s Bleez, and she’s the one who looks like a pale Barbie doll with skeletal batwings growing out of her back and, for reasons unclear to me, dresses in a Red Lantern uniform that consists of a fetish mask (with little batwings on the side), thigh high, high-heeled boots, and garters.

Being a Red Lantern, she’s full of rage, talks a like the Tasmanian Devil, and vomits burning blood-vomit. It’s hard to tell if you only see her on covers, like the one where she’s showering in blood, where she just seems like an overly-sexualized fantasy that some heavy metal-loving teenager drew in the corner of his spiral ring notebook in 1986 when he should have been taking notes in social studies class, but she’s actually funny.

Like, you have to invest in spending time with these seeming dumb-ass characters to get to the point where you enjoy them, but Bleez, like so much of the Geoff Johns era of Green Lantern comics, is so ridiculous it’s impossible to tell if she’s being presented seriously, or if DC and its writers are making fun of you for reading the comics, or if she’s a self-aware parody or…what exactly. Tomasi’s work on this book, like Johns’ on Green Lantern (and Brightest Day, which was published at the same time as this) is beyond ridicule. Because anything you can imagine as a mildly exaggerated thing they might create or right in order to make fun of their past oeuvre, they have already done it themselves, and to a much greater degree than you thought of (Tucker Stone describes this phenomenon much more succinctly in his review of the latest issue of John’s Green Lantern here; I need to think of a nice, short term for that aspect of Johns’ writing, as I usually simply resort to “stupid/awesome,” which seems to vague).

But how about some examples? 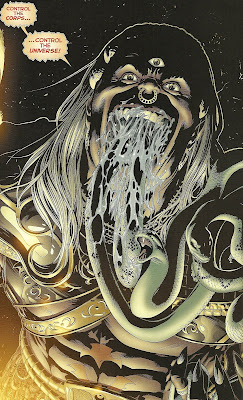 After two issues or so of getting the team together, we get to the gross stuff like snakes eating the eyeballs out of aliens, or the villain puking snakes (Vomitting plays a huge part of the action in this book), or the first battle with Bleez, in which Guy Gardner attempts to capture her in a ring-generated green energy orb and she breaks out by continuing to vomit so much red rage blood puke that she fills the entire orb up and keeps vomiting until it pops like an overfilled water balloon.

Later, there’s a scene where Guy, still somewhat infected by “red” from the previously discussed Blackest Night: Green Lantern Corps, vomits up a few bathubs full of blood, which transforms into a sphere, which then takes the shape of the leader of the Red Lanterns, who delivers a message, before turning back into a sphere (This is apparently how Red Lanterns communicate: talking coughed-up blood sculptures…?)

Then Bleez humps the sphere: 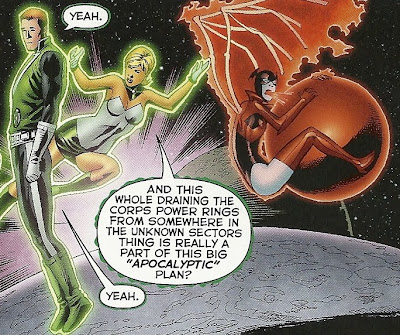 The climactic battle involves Guy and Bleez wrestling the villain in pool filled with snakes, everyone vomiting on each other until the snake guy has two anaconda-sized snakes swallow Guy and Bleez, John Voight-style.

The snakes begin to not so much digest our heroes as integrate them into their own interiors. Guy’s not having that though! He uses his last ounce of willpower to take control of the snake, shove it down the throat of the other snake, the one containing Bleez, pry open it’s jaws from the inside, crawl into Bleez’s snake, swallow her blood-vomit (!!!), push his arms through the eye sockets of their shared snake, grab it’s jaws, and then rip that motherfucking snake to shreds with a burs of blood vomit power! (!!!!!)

I am not making any of that up: 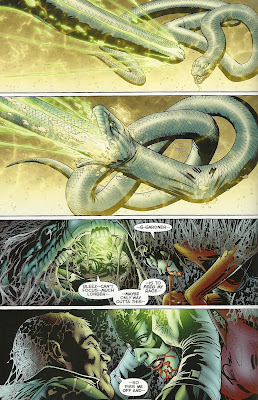 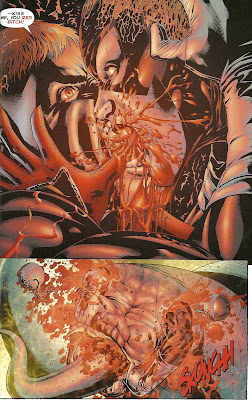 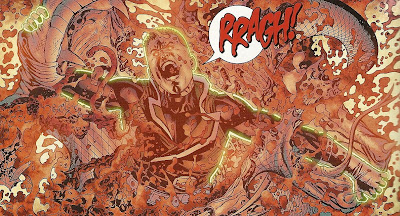 By the time he re-engages the villain, taking a ring-generated ice scream scoop to his third eye, it seems like no big deal.

This book, and particularly that climax, pretty much blew my mind. It’s not as well-drawn as the ultraviolence and Johnny Ryan-level of puke and blood you might find in the other Green Lantern books of the time (The Doug Mahnke-drawn Green Lantern and the Patrick Gleason drawn GLC), but good God, what do you really say to a scene like that, beyond “Bravo.”

Is it decadent and depraved? Is it wildly inappropriate for children? Is it downright bizarre to be appearing in a more-or-less all-ages book? Yes, yes, yes, yes. But once the decision has been made that the best thing to do with the Green Lantern characters is to use their magic wishing rings in order to effect as much gore and violence as would be impossible to do with traditional, non-wish-powered weapons, you kind of have to give Tomasi and Pasarin and everyone involved credit for going as far with an ill-considered decision as they can.

I mean, we’re really only a few years away from an “MR”-rated, Johnny Ryan Green Lantern comic published in a sealed, black plastic slipcover to protect the eyes of any children you accidentally come into a comic book shop and think they see a character they recognize from a Cartoon Network cartoon and want to look at the book, right?

I end up enjoying this a lot more than I thought I would, as I assumed I would not enjoy it at all. I’m glad I didn’t buy it, but borrowed it form a library. If I had money invested in it, it might not have struck me as quite as enjoyable. There’s a gob-smacking, “I can’t believe this got published” sort of humor to the endeavor, but it’s not the sort of pleasure that’s worth $3, let alone $4 bucks, per 22-page installments of. (And you would have had to invest $26 to get to the climax seven months later anyway).

Bonus What The Hell Is Wrong With These People (Me Included) Scene!

When the mind-dominated Green Lanterns attack our protagonists, they capture them in Green Lantern logo cells. 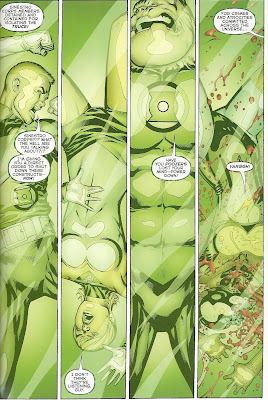 This necessitates Pasarin drawing Aris and Bleez’s breasts pressed up against the “glass” of the cells. Oddly, there aren’t any panels of Guy and Kilowog’s asses or crotches pressed against the glass, just their faces. I guess only the girls though to try breaking out of the traps using their bathing suit areas…?

Zardor. The villain’s name is Zardor. I guess I couldn’t remember it while writing up the review because it is the most generic evil alien name ever.

A few minutes of Internet research reveals that he is an original creation of these particular creators (unless the Internet is wrong, which would be unheard of). So good job guys; he’s actually a pretty cool villain, and a good foil for these characters, given his vomit-based powers.

Oh I loved this whole series to death. Sadly, they dropped this whole plot line by the time that they ended the War of the Green Lanterns...so poor Sodom Yat is still out there possessed by Zardor, who somehow never made it to Oa.

Yes, it was over the top and quite ridiculous but that is actually how I like my Space Opera.

I miss this book. Now we have Guy and John teamed up in GLC, and it's just not quite the same.