So I see the Arrow ad campaign is off to a good start. 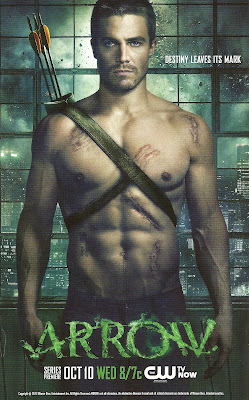 I've been quite perplexed by certain aspects of the upcoming TV show based on DC's Green Arrow superhero, starting with the fact that they're calling it Arrow instead of Green Arrow, which seems a little like Warner Bros. calling the next Batman movie Bat.

But then I saw the above ad in a couple of the DC comics I bought at the shop this week, and realized that despite the name of the show, the ad folks have zeroed in on exactly what my female friend who watched Smallville liked about its Green Arrow character (played by Justin Hartley), and what first attracted her (and, I assume, most of the initial audience) to Smallville in the first place.
Posted by Caleb at 5:41 PM

Labels: ads, phoning it in

Perhaps "Green Arrow", to the general populace, calls to mind the permission to turn left, and not a super-hero.

wouldn't know, SallyP, there's writing over his groin. And he's got lots of scars everywhere else.