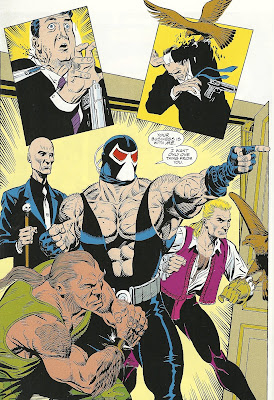 When Bane first arrived in Gotham City, intent on breaking its ruler The Batman and taking his place, he brought with him three colorful allies he had made within the bowels of Pena Duro, the Santa Priscan prison where he was born and where he had spent his entire life up until that point (You remember; it happened in 1993's Batman: The Vengeance of Bane #1, by Chuck Dixon, Graham Nolan, Eduardo Barreto and Adrienne Roy; the folks responsible for all of the panels in this post).

These were Trogg, the hirsute brawler and electronics expert who once saved the child Bane from the hands of a pedophile; Zombie, the gaunt chemical expert who aided Bane when his captors performed experiments involving the super-steroid called Venom; and Bird, the Gotham City criminal who had a way with birds and told Bane of life beyond the prison walls.

Before he hooked up with any of these hardened criminals, however, the young Bane had another, softer, cuddlier friend, one who was there for him when no one else was, and was present during one of the most important, transformative moments in the archvillain's life.

I'm talking, of course, about Osoito.

That's the name young Bane used to refer to his teddy bear, which seems to be oso, Spanish of bear, modified with the "-ito," that means "dear, little." At least, that's what my memories of high school Spanish tell me the name means.

Bane was sentenced to prison for the crimes his father committed while he was still in the womb, and in the above image we see him, Osoito and, in the background, his despairing mother, wasting away. Note how pissed Osoito looks. Is that merely the way Barreto placed the lines above the plus bear's button eye suggesting an angry eyebrow, or is Osoito angered by the injustice of his pal's plight? 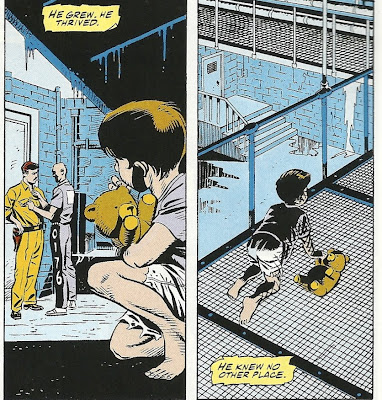 We don't know. But we do know that Bane carried Osoito with him everywhere he went in the prison and, together, they witnessed the occasional shiv-ing. Or shanking. Or el lancinar. (High school Spanish never covered prison slang, I'm afraid). 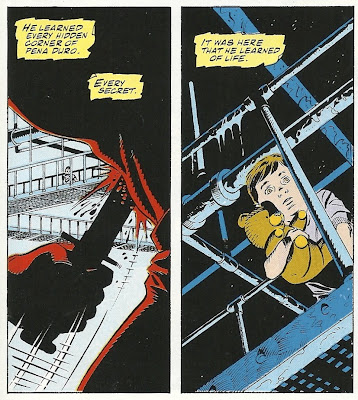 Osoito was with young Bane when his mother died, and the boy was moved to the general population. He was with him when the maybe-a-pedophile-although-the-script-makes-pains-to-suggest-otherwise ("He's mine!," the big, fat, sleazy looking inmate says in a dialogue bubble, "One so small as this can slip beneath the notice of the guards. He will be useful to me." The looks Nolan and Barreto draw on his face suggest something less pragmatic, however).

Just as that inmate lays his hand on Bane's shoulder, Trogg appears to defend the child, and, in the ensuing fight, Bane—and Osoito!—plummet over a railing and fall several stories to the stone floor below, Bane's head resting on a sticky pillow of his own spilled blood. 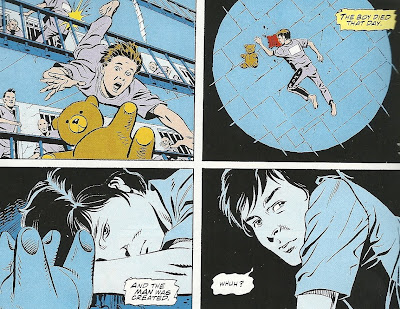 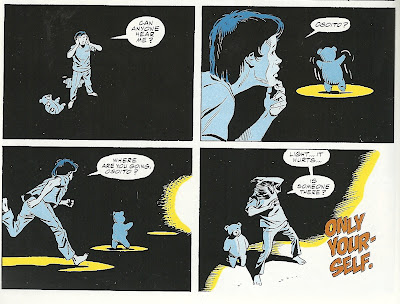 But it is not heaven Osoito is taking ponderous teddy bear steps towards. Rather, it is a weirdo dream sequence, wherein little Bane meets a golden, glowing ghost of his own future self that tells the child he is "what you will become."


A physical and mental paragon. The living embodiment of human superiority. The blood of kings runs in you. The blood of your father

The world is yours and will be yours one day. Men will be like cattle before you. Like sheep.And so on.

There is only one thing standing between that boy and that destiny, the vision tells him, and that is fear, which, conveniently enough given that this is a Batman comic, is in the form of a giant bat.

After clutching Osoito and screaming "Noooo....", Bane awakens from the dream sequence and it's 31 days later.

The child, he says, has died, and so he apparently put away childish things, like Osoito, and took out a knife, which he uses to repeatedly stab that big, fat guy who may or may not have been a pedophile.

Osoito is MIA for much of the rest of Bane's origin story, which involves him reaching adulthood, killing dudes, fighting rats and crabs and fish, doing a bunch of push-ups, sit-ups and pull-ups, reading, and being a human guinea pig for drug experiments, faking his own death and, ultimately, killing a shark with his bare hands (By prying open its jaws and then sticking his hand down it's throat to punch out its internal organs, just in case you were wondering how a guy might kill a shark with his bare hands).

A totally nude Bane then climbs out of the sea, sneaks into the warden's bed (!), takes him hostage, commandeers a helicopter and rescues his three friends. All while nude.

Once the helicopter is off of the prison island and out over the shark-infested sea, Osoito makes a surprise return to the narrative, as Bane hands a box to the warden: 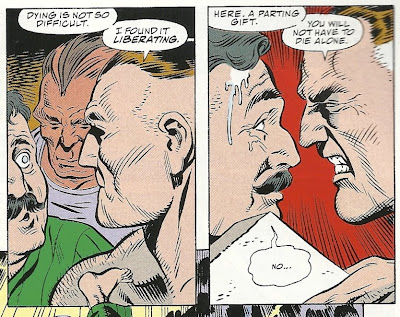 And as he and it plummet into the waiting waves, the lid flies off revealing the contents of the box: 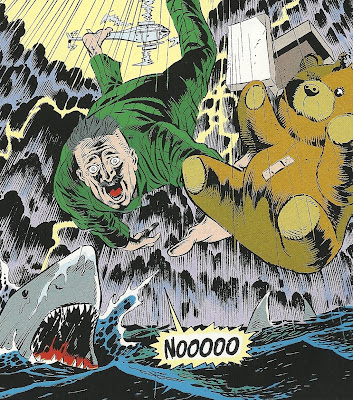 Gasp! To think, after all those years together, after all they had been through together, that is how Bane repays poor, loyal Osoito, by throwing him off a helicopter into shark-infested waters alongside the wicked warden who so abused Bane.

Moreso than any other act that preceded or followed, I think this is the incident which reveals Bane to be a truly evil villain.

But Osoito, like the kid he used to hang around with, turns out to be made of pretty stern stuff, and it takes more than the sharks of Santa Prisca to finish him off. While a cloud of blood in the water announces the fate of the warden, the last image we see of Osoito shows him floating safely to the surface... 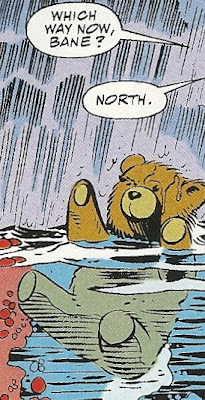 ...his head breaking the surface, his paws held high it what seems to be triumph! Osoito lives!

Unfortunately, that is, as far as I know, the last Osoito is ever seen. But I like to think he's still out there somewhere, perhaps comforting other prisoners of Pena Duro and starring in their own coma-induced visions as a sort of stuffed animal spirit guide, showing them the way to bigger and better things as Batman archenemies. Or perhaps lying on the beach, biding his time and plotting his revenge against Bane for casting him so callously aside.
Posted by Caleb at 7:59 PM

Reminds me of that post that was about The Red Baron/Enemy Ace having a puppy once.

Osoito also appears in the Arkham Asylum games in several cameos (so much so that in Arkham City, Bane uses a teddy bear factory as his headquarters).

Posts like these are why I keep coming back. You latch onto the fun stuff!

The weirdest thing about Nightwing #0 was that Dick apparently has Cassandra Cain's body reading ability now. Which suggests that if Cassandra ever does reappear in the New 52, she'll be the daughter of Dick and Shiva.

Also, RHatO basically retells Death in the Family, only with Leslie forcing Batman to take Jason in, and Jason's mother not selling him out to the Joker. Also, story narrated by Joker states that Joker set up Jason becoming Robin just so the Joker could kill him.

The weirdest thing about Nightwing #0 was that Dick apparently has Cassandra Cain's body reading ability now. Which suggests that if Cassandra ever does reappear in the New 52, she'll be the daughter of Dick and Shiva.

Also, RHatO basically retells Death in the Family, only with Leslie forcing Batman to take Jason in, and Jason's mother not selling him out to the Joker. Also, story narrated by Joker states that Joker set up Jason becoming Robin just so the Joker could kill him.

By the way, I love that DC put out the Knightfall in those thick slabs of comic book goodness. Bought the last one this week.

Well... Osoito's legacy does live on, in a way. Vengeance of Bane II (which takes place post-Knightfall) has Bane dreaming of the bear. His prison psychiatrist latches onto it as a "totem", and he gives Bane a replacement bear to kick-start his rehabilitation.

I think that Gail Simone also referenced the bear in the last issue of Secret Six...