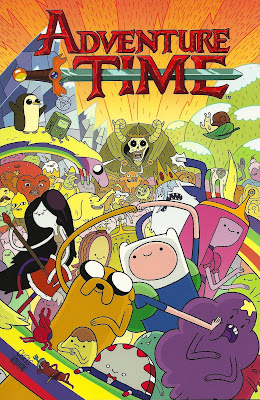 The Adventure Time comic is kind of a strange duck.

It's based on the Cartoon Network series of the same name, but unlike most comics based on cartoons that air on Cartoon Network, it's not being published by DC Comics, the comics-publishing arm of CN owners Time Warner, but by Boom Studio's kids line.

Some of Boom's kids books have been of remarkably high quality (Particularly Roger Langridge's Muppets books), but Adventure Time was even further removed from Boom's best books by a welcome if head-scratching choice in writer (Ryan North, who is responsible for the excellent online gag comic Dinosaur Comics), and the inclusion of back-up stories from Aaron Reneir, Lucy Knisley, Michael DeForge, Chris Eliopoulos, Paul Pope and Shannon Wheeler.

Given that line-up, I think only SpongeBob Comics and some of Bongo's Simpsons comics can boast of a similarly strong all-ages appeal, one split between kids and grown-up enthusiasts of great cartooning.

Niece #1 has read copies of Tiny Titans and SpongeBob when she and I and they are all in the same place at the same time, and I can't imagine her ever parting with $4 of her own money for a comic book. That's more than half-way to a $7 LaLaLoopsy Mini, and, LaLaLoopsies provide hours and hours and hours and hours and hours of entertainment to her, as they can be played with endlessly. Or at least until she outgrows 'em. A comic takes like five minutes for her to read though; even SpongeBob, which often has a drawing activity in it, doesn't keep her occupied longer than 15 minutes, tops.

Comics are a terrible investment for little kid money.

Also, there were something like 12,000 variant covers for the first few issues of Adventure Time. Since the only kids comics I know of that feature variant covers with any regularity are Boom's, I'm thinking variants are more of a thing one sees on comics geared toward adults (who have the disposable income to want to spend money on comics cover collecting and speculating) than on comics geared towards little kids.

I decided against reading the book serially, however, and not just because it was so goddam expensive. Additionally, it's millions and millions of variant covers included work from some pretty surprising artists and, given the choice between a trade paperback collecting whole story arcs and all the covers, or 1/4-to-1/6th of each story, and 1/20th of the covers available, the former seemed much more attractive.

Obviously variant covers encourage sales to someone somewhere (retailers, I imagine), but they almost always nudge me to skip the comics and wait for the trades.

Since writing that post back in February, I have seen some Adventure Time. I borrowed a DVD from the library, and watched...I don't know, a dozen episodes...? It is a really, really good show; a surprisingly good show.

If you haven't seen it, it's about a boy with a dumb hat whose best friend is a talking dog with Plastic Man's powers and Bender from Futurama's voice. The live in a tree house, are friends with a princess, candy people and a cool vampire lady, and they get in fights with bad dudes and save the day a lot. Highly recommended.

So when the trade became available, I bought it and read it. It too was pretty good.

I was pretty surprised by the contents, though. It includes the North-written sections of the first four issues, illustrated by the art team of Shelli Paroline and Braden Lamb, who follow the show's design and aesthetic perfectly. None of the back-ups are included here. Wherever they do ultimately appear? That will be a book to check out. (But this one's still good too!)

While the back-ups aren't in this trade, the contents of Boom's Free Comic Book Day offering are, and they are rather awkwardly jammed into a the middle of the first issue's storyline...like, literally between panels. It's weird. 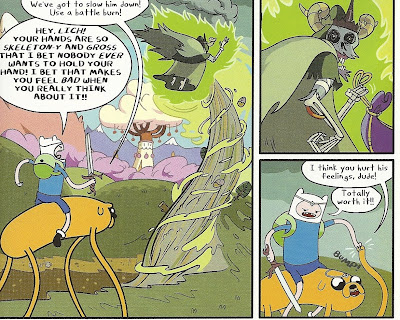 Just as Paroline and Lamb capture the visuals of the cartoon so well, North gets the various characters' voices just right, and nails the unusual tone of the show. I was pleasantly surprised at how much of his own voice seems to come through, as well, thanks, in large part, to his inclusion of little messages at the bottoms of most of the pages, addressing the reader directly or the content of the page in the same way the alt text in his Dinosaur Comics does. Additionally, many pages feature tiny little bonus comics featuring one-off jokes or asides featuring the characters on the page above. 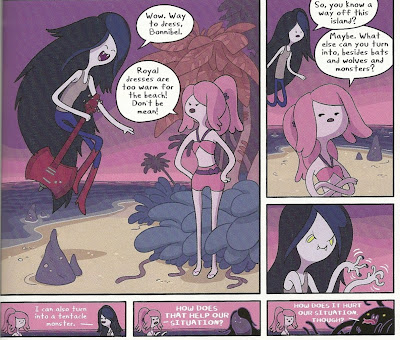 The strategy makes for a really fun comic to read. The content, as well as the way it was told, made reading Adventure Time Vol. 1 a really enjoyable experience for me.

The plot is, nevertheless, extremely simple and straightforward. It's fight comics at their most basic. A powerful villain with a powerful weapon appears, defeats our heroes and traps them. They must figure out a way to escape, and then figure out a way to defeat the villain. They eventually do.

North is able to wring a rather remarkable amount of drama and tension out of the situation though. While I was always certain the heroes would win and save the world, the "how" of it was never certain, and North presents an awful lot of trial and error in the process; like, they fail a good half-dozen times before they finally succeed, and they do so with a clever, visually interesting plan.

Clever and visually interesting, are, by the way, words that could be applied to many aspects of the book.

Did they manage to sneak the star of North's Dinosaur Comics into a panel here...? 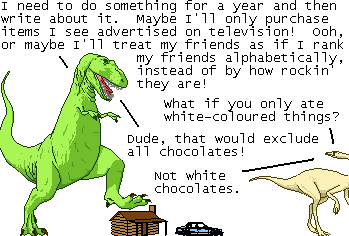 And here's a T-Rex skeleton in a panel of Adventure Time: 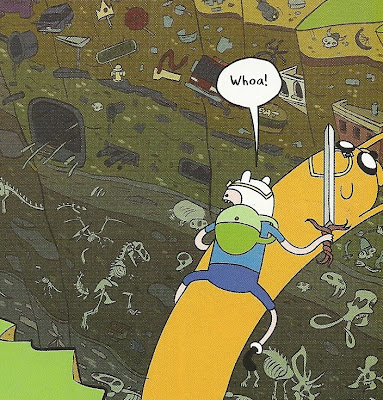 Is the latter the skeletonized version of the former? I don't know. Only T-Rex himself could tell us, except he can't tell us anything, because now he's a dead skeleton, and dead dinosaur skeletons can't tell us anything at all (although paleontologists may hold a different opinion on the matter).

Now, these are all pretty great images, and we get to see the various characters as drawn by Stephanie Buscema, Jeffrey Brown, Sanford Greene, Chris Samnee, Scott C., Adventure Time creator Pendleton Ward and his mom Betty Ward, but dang, almost half of the trade paperback collection of Adventure Time is not comics, and, when I was reading, I was pretty shocked to find the story ended when I still had another fifty pages or so worth of pages to flip through. 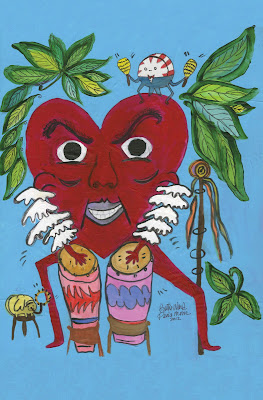