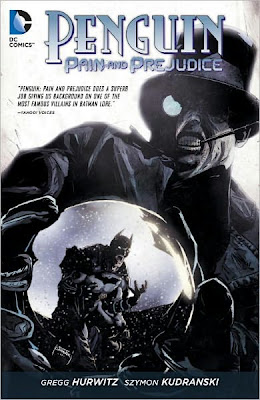 In 2008, DC published a series of one-shots featuring various Batman villains by different creative teams, under the umbrella title of Joker's Asylum. Jason Aaron wrote the Penguin installment, a twisted little 22-page story that explores the character's weird relationship with women and zeroes in on the more recent portrayal of the character as someone who looks legit in public, but is evil underneath: Gallantly freeing a woman from slavery and wooing her with his wealth and attention, we see him turn those same resources the complete and utter destruction of someone he only imagines slighted him.

It was a pretty effective demonstration of why someone like The Penguin, a "legitimate businessman" style criminal rather than the serial killers that the rest of Batman's rogues gallery has evolved into, can still be seriously scary, and it certainly helped that Aaron had the strong cartooning skills of Jason Pearson illustrating the story.

Crime novelist-turned-comics writer Gregg Hurwitz took that one passage of Aaron's story and repurposed it for the 110-page "Pain and Prejudice," a new, "New 52" origin story for the Penguin published as a five-issue miniseries—presumably because DC couldn't decide which of the five monthly Batman books to stick it in.

Hurwitz draws Aaron's scene out, and while the latter writer had a neat little one-page reveal in which the Penguin's girlfriend learns of it—in keeping with the EC horror comic vibe of the Joker's Asylum series, it is presented as a twist—Hurwitz devotes several scenes of his story to the Penguin similarly taking people's lives apart behind the scenes. It's apparently a "thing" of his, like his obsessions with birds and umbrellas, and while its sort of tiresome to see a writer so thoroughly quoting another, it grows even more tiresome the more times Hurwitz re-quotes it. (In case you missed Aaron and Pearson's shorter, sweeter, better-drawn version, it's actually included in the trade paperback collecting Pain and Prejudice, as if it were a back-up story).

Which isn't to say that Hurwitz doesn't add his own touches to The Penguin's story. He does, and some of them are pretty dramatic, even, I'd argue, out of left-field.

In this version, the Penguin was still a funny-looking, terribly bullied child who loved birds, and he grows up to be a Gotham City crime boss who runs a club called The Iceberg Lounge. This new Penguin was part of a large family of healthy, normal-looking brothers, and, one-by-one, he murders each of them (and his father) while still a child, sparing only his mother, whom he continues to care for as adult, when she has grown so old and frail that she seems to be in a semi-vegetative state.

Oh, and he's also an ingenious robotics expert now because, um, why not...?

Extremely brutal, he not only goes to great lengths to completely destroy his enemies—usually by killing their friends and family—he also hires thieves to steal jewelry in showy, ultra-violent ways that don't seem all that efficient (a celebrity's earrings are stolen by ripping her ears off as she walks past paparazzi and fans with her bodyguards; a society maven's necklace is stolen by beheading her with a machete as she steps out of a limousine, etc).

As in Aaron's story, The Penguin is trying to woo a decent woman with whom he cares for more deeply than any of the other beautiful women he uses his money and power to surround himself with, and he's doing so by hiding his true self—in a particularly melodramatic twist, this woman is blind, and he won't let her touch him, so she can't judge him by his physical qualities.

He's also built a bunch of penguin-shaped guided missiles that emit some kind of bird-controlling sounds that cause birds to flock and attack children. Batman doesn't appear until the last page of the first issue/chapter, and Hurwitz and artist Szymon Kudraski try to keep him off the page as much as possible, generally showing only parts of him in each panel, although as the story progresses, naturally Batman appears more and more, as good has to ultimately triumph over evil, which means Batman has to stop Penguin from having all of the children of Gotham City pecked to death by flocks of wild birds. 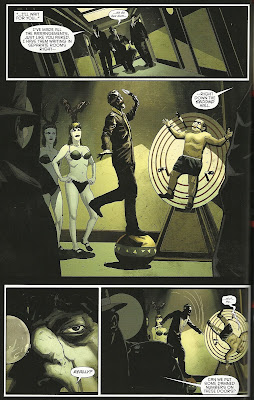 In a weird running gag, The Joker apparently has a room in The Penguin's house, and The Penguin will periodically walk in on him doing something strange and unexplained (wearing a bra, stockings and apron while feather dusting the corpse of a goat or throwing knives a young Danny DeVito, for example). The Joker never speaks, and The Penguin never speaks to hm, usually just turning and walking away with little more than a "Really?". Hurwitz never explains what that's all about—at the climax, Batman assaults Penguin's mansion, but we don't see The Joker at all—but it's the one welcome bit of weirdness for weirdness' sake in this otherwise grim and rather rote story.

Kudranski's artwork is of the photo manipulation variety, with everything so heavily photo-referenced and with so many bits of the images dropped-in that few pages of the comic look drawn instead of assembled. Paired with the dark, murky coloring, it is not a nice-looking comic by any stretch of the imagination, but, beyond that, it's barely legible.

Here, for example, The Penguin slips on what I believe is supposed to be his own boutonniere, which fell off when he jumped in surprise at Batman jumping through his skylight: 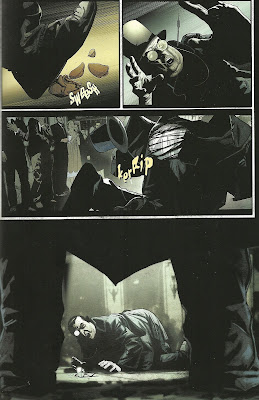 His slips, falls backwards and...lands on his knees...?

Here is the end of his first encounter with Batman: 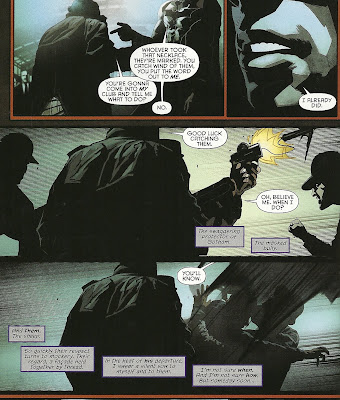 The goal was apparently to show as little of Batman as possible, although I don't know why the last two panels were framed with the Penguin essentially standing in front of "the camera," nor can I imagine how Batman got so small or The Penguin got so bit between panels that the latter completely obscures the former. It's hard to tell at first, but those are Batman's hands on the grappling hook gun there; that's not in fact The Penguins left arm, although the positioning and coloring make it difficult to discern (also, what's up with the timing? That thug in the hat is inches away from Batman, and his grapple just left the nozzle of his gun).

This is the worst part. I literally have no idea what happened. To set it up, Cassandra is on The Penguin's bed, thinking he's playing a videogame while he's controlling his The Birds bombs (Hey look, those pigeons lifted a car in the third panel. And then Batman...does...something...? 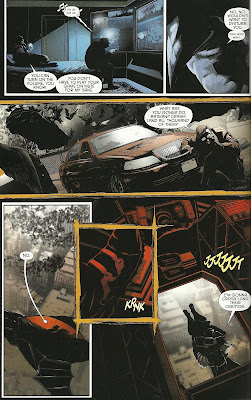 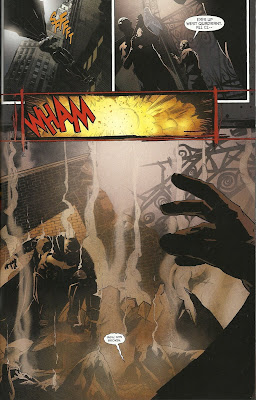 As near as I can tell, Batman dropped himself like a bomb out of his Batplane, landed on The Penguin's gate and then exploded...?

Is that right...? It's awful, awful artwork, a sort of anti-comics that makes any of the weakness of the writing, plotting or conception seem trivial.

Who cares how goofy The Penguin building a robot penguin to provide home health care for his mother is, or how depressing it is that a clever, trifle of a story from five years ago was expanded into a dark, turgid melodrama when the guy putting the penguins on the page can't even be bothered to move them slightly between panels...? 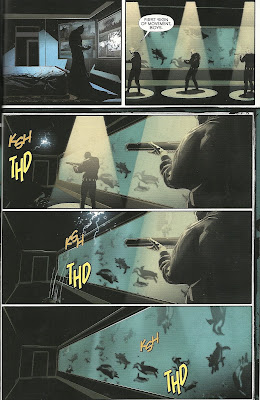 What really boggles my mind though is that these are paid professionals who make this stuff, in the year 2012, and that there's an editor—maybe more than one!—who read these comics before they were published and shipped, nodded to him or her or themselves and thought, "Yes sir, this isn't at all a piece of shit! I approve. Now let's send this to the printers..."

And that person or those people? Paid professionals too.