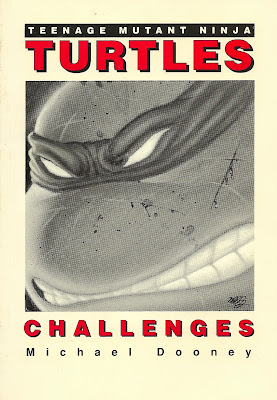 This is a Mirage-era Teenage Mutant Ninja Turtles original graphic novel that I didn’t even know existed until this summer. I blame, in part, the cover, a fairly generic black-and-white image of a Turtle—which could be any of the four, really—in extreme, context-free close-up. That and the fairly generic title; when I first ran across an image of that cover online, I just assumed it was a collection of Michael Dooney’s TMNT comics.

Rather, it’s a digest-sized, 1991 gr—well, graphic novel probably isn’t as accurate a terms as “graphic short story collection,” consisting as it does of six short stories featuring the core, original cast of the comic book series. All of these stories are written and drawn by Dooney, a fairly prolific Turtles comics-maker, and lettered by Mary Kelleher.

When it was originally published, the 93-page trade paperback cost only $6.95, and, at the time, would have therefore been a nice, cheap introduction to the Mirage version of the characters, who would have been approaching peak pop culture saturation (that would be the year the second live-action feature film was released). It will be a bit pricier now, and a lot harder to track down, if you can find it at all; if it was created today, I suppose it would be priced something closer to $16.95, at the rate comics prices have skyrocketed (and current Turtles comics license-holders IDW produce more expensive comics than some of their publishing peers, so their prices have skyrocketed higher).

The first chapter is a 15-page origin story, set on the Massachusetts farm house where the Turtles retreated to with Splinter, April and Casey after the Foot attack on April's apartment building. Exploring a nearby storm drain, Leonardo suddenly finds himself recalling their time in New York, and their lives in general up until this point, leading to a brief recounting of their origin: Splinter learning ninjitsu by studying the movements of his owner*, his owner’s move to America, The Shredder’s killing of his owner and orphaning of Splinter, the canister of radioactive chemicals that smashed into the Turtles’ fishbowl, their lives in the sewers and, briefly, their adventures through the first 12 issues or so.

These are explained almost in passing, with Leonardo saying, “After that we had many strange adventures, saw many wonderful places and even found a new home above the streets, but that, too, was taken from us.” Those lines are spread over four panels, the accompanying images showing the Turtles and Fugitoid teleporting, the Turtles with Renet in a fur bikini during the time of the dinosaurs, a New York City skyline, and the Turtles battling the Foot in a burning Second Time Around shop while The Shredder looks on from the doorway.

The pages—here and throughout the book, actually—are often full-page splashes, with no more than three or four panels ever filling a page, a restriction placed on Dooney by the book’s small size, perhaps. It does compel some nice image-making, however, like the four splash pages devoted to introducing the four Turtles by name, and saying something about each character with only a single image.

After that, each gets their own solo story, starting, unusually enough, with Splinter.

In his 13-page strip, the Turtles’ sensei attempts to meditate while the four of them train together…until Raphael decides he’s had enough of that crap, and quits for the day. Splinter tries to scold him, leading to a fight between the two, ending when a little twist to the clash that is only unveiled in the last few panels.

In Raphael’s story, the ninja turtle is battling the Foot Clan on a New York rooftop and, when seeking temporary refuge, he finds himself in the apartment of a little old lady who serves him tea. Luckily for Raph—or perhaps for both of them—she’s blind.

In Michaelangelo’s, our hero is out enjoying the outdoors of a Massachusetts state park when he finds a couple of hunters intent on poaching, thinking if they use bows instead of noisy rifles they can get away with it. They might have, if Mikey didn't decide to play ninja vigilante park ranger.

In Leonardo’s story, Dooney has our protagonist narrate as he trains hard, and we get a look inside his head while watching him do katas and suchlike in the barn, until we get another late twist reveal, highlighting a little-seen aspect of the character’s personality (pretty much across media).

Finally, Donatello’s story is yet another with a sort of twist ending, and it is perhaps the most obvious and least imaginative. We follow the character through some 12-pages of a crazy sci-fi adventure, in which he doges missiles and fights robots, until he’s called away to dinner, and realize that was all just a video game he was designing.

I'm sorry I missed the book the first time around—and continue to not read it for the next 23 years—but I'm glad I found out about it and found a copy eventually.


*When I saw Dooney's panel of an upright, not-yet-mutated Splinter performing some martial art movement in his cage, for the first time in my life I wondered why it was that Kevin Eastman and Peter Laird decided to make Splinter a rat instead of a monkey or primate of some kind, as a monkey learning kung fu by mimicking the movements of a human master seems a lot more plausible to me. 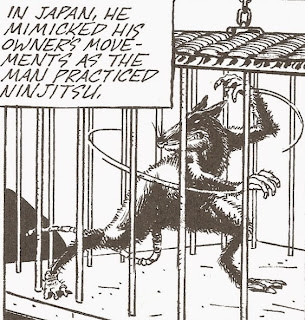 I have no idea why this occurred to me all of a sudden, as I never thought to question it before. I wonder if that's whey the current IDW series and the latest live-action movie did away with that aspect of the origin, the former explaining Splinter's kung fu skills via reincarnation and the latter via book learning that occurred after he was mutated into a half-human form.
Posted by Caleb at 8:55 PM

It's not hard to track down at all. There are several buying options on Amazon, the cheapest is $10.