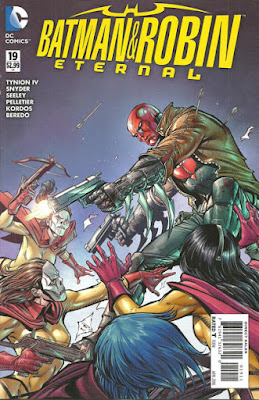 Batman & Robin Eternal #19 (DC Comics) This issue is comprised mostly by fighting, with an opening sequence devoted to demonstrating the threat that our heroes will be fighting throughout the issue. The Icthys virus thingee that Mother ordered from St. Dumas turns all the kids in Spyral's private school kill-crazy bonkers, and so the various teens are trying to murder the various adults. The adult heroes all hold their own admirably, and manage to subdue the teens, even if doing so is somewhat surprising (like, how on Earth did Bertinelli last more than a panel against Cassandra?). The surprise cliffhanger ending isn't quite that, given what we knew going into this issue, but it's a weekly--every ending can't be a mind-blower. Paul Pelletier pencils the issue and Tony Kordos inks it. The art's fine, but it's really hard to transcend all the handicaps provided on any artist by the godawful designs of just about every single character in this comic. 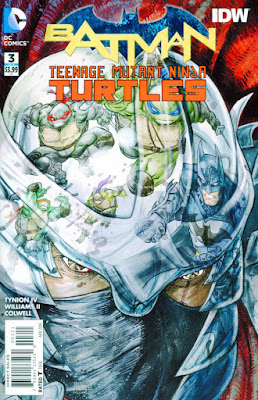 Batman/Teenage Mutant Ninja Turtles #3 (DC) By the last page of this issue, James Tynion IV and Freddie E. Williams II's six-issue, inter-company crossover reaches its halfway point. Interestingly, this could have actually been the end of the series, as Batman and his visitors from a different dimension (and different publisher) have patched up their differences from last issue, exchanged stories and then teamed-up to defeat their common enemy. Tynion's plotting throws a welcome monkey-wrench into their victory, however, with The Shredder doing something rather unexpected, and, in a surprising ending, meeting a Batman villain better-suited to Shredder and the Turtles than the one who has thus far occupied the most panel-space.

I'm certainly curious to see where Tynion takes the characters in the second half of the story, although the knowledge that it is already half over does weight a little heavily on me, as it doesn't seem like it's going to have enough room to come anywhere close to delivering what I most want from these sorts of crossovers: A sense of once-in-a-lifetime occasion coupled with a comic that successfully incorporates every possible angle of such a team-up a fan could possibly want.

As for this issue, Williams' art remains quite strong, and he continues to prove that even if he didn't seem like an ideal candidate for the project (he wouldn't have even been in my top 50 artists, if I got to pick), he can draw the hell out of all of these characters, and find a comfortable style to accommodate the very different franchises and their accompanying aesthetics. I'm not terribly fond of the various designs, but that's more a fault of the publishers and editors decision to make the story "in continuity" for both, meaning these are the IDW Turtles and the New 52 Batman (That last page was pretty confusingly laid-out, though).

Tynion's plotting is fine, and there were the already mentioned surprises, but I continue to be disappointed by the lack of actual action in a book full of ninjas and martial artists–the fighting is all very much of the typical superhero static posing with implied action–and the Turtles all sound a little too...cowabunga, for my tastes. Typically, the trend has been to make Michelangelo the receptacle of that aspect of the Turtles, and have the other three play straightmen to him, but here the ratio seems a little flipped, so that only Raphael seems serious, while the other three are all flippant, sarcastic and slang-slinging.

Tynion does give Raphael a pretty great line, when he's making the case to Leonardo that Batman is clearly insane, in which he mentions not only the obvious fact that Batman runs around at night dressed like a giant bat, but also that he drives a car that looks like himself.

That does kind of take the idea of "branding" to a whole 'nother, totally insane level, doesn't it...? 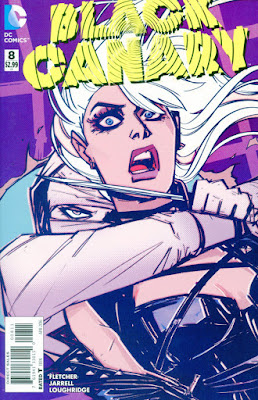 Black Canary #8 (DC) The second story arc of the Black Canary ongoing shows that writer Brenden Fletcher isn't getting rid of Dinah's bandmates, or even breaking up the band, despite the fact that the first story arc seemed to resolve that whole thing (Good news? Maybe they'll get share a bill with Boojum or Scare Tactics at some point). Black Canary the band are in a couple of scenes in this issue, even if they are different scenes than those featuring Black Canary the title character.

The latter is swept up in some weird, rather unexpected plot involving her missing, martial artist mother (not to sound like a broken record, but that might have been less of a head-cocking, eyebrow-raising revelation in the pre-Flashpoint DCU, wherein Black Canary's mother was the Golden Age Black Canary), her aunt (rather artlessly revealed here) and a very unexpected (but welcome) guest-appearance from another DC superheroine...one I don't think we've seen in a rather long time (She might have been in the short-lived, New 52 JLI though; I've honestly all but forgotten everything that occurred in that book).

Regular artist Annie Wu is MIA after th cover, but guest artist Sandy Jarrell does a fine job of filling in. Honestly, I didn't even miss Wu, and her art is generally my favorite part of this book every month.

I have a suspicion this book won't be around at the end of the summer, but, for what it's worth, this storyline seems more in keeping with what I would expect from a title starring Black Canary--more regular people fighting other regular people, less extra-dimensional alien invaders composed of living sound or whatever. 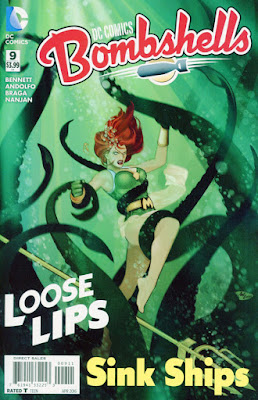 DC Comics Bombshells #9 (DC) Artists Mirka Andolfo and Laura Braga join writer Maguerite Bennett for the latest chapter in this apparently ongoing, Elseworlds-stype story about Golden Age versions of DC heroines fighting against the Nazis and their supernatural ally, who is here portrayed as a blue-eyed cousin of Sauron from the The Lord of The Rings movies. Stargirl, Supergirl, Mera and Wonder Woman are the characters getting the spotlight this issue, which reveals what's what in the kingdom of Atlantis at the moment (turns out Aquaman is not the king) and what Paula Von Gunther is up to (sporting some awesome black jodhpurs...not digging the matching black top, though). 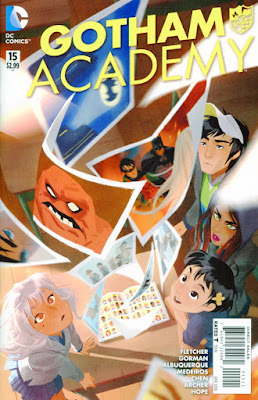 Gotham Academy #15 (DC) The guest artist-filled "Yearbook" storyline, which really seems more suited to one, big special (maybe an 80-Page Giant, although I guess that would cost like $10.99 or something these days), continues. Of the three guest stories, the first was by far my favorite, as it assures us that even though Batman '66 may have been canceled, there is still a book in DC's line where Egghead can make egg-themed puns.

The next story, featuring two guest-artists, features a pretty sweet Scarecrow design and rendering by Eduardo Medeiros, which is currently my favorite Scarecrow design (I think Meeiros might be the first artist to get to draw The Scarecrow with a hat on since the New 52-book; he's been appearing much more frequently since, but always sans hat.)

The third, by Mingjue Helen Chen, is drawn in a very lovely style, but it's so close to the regular look of Gotham Academy that it doesn't stand out nearly as much as the others, and therefore isn't terribly interesting to look at. At least, not in this context. 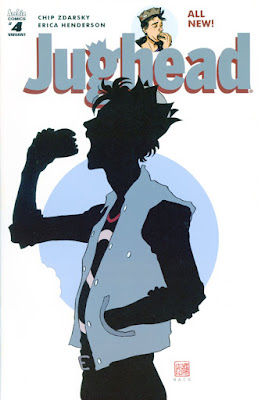 Jughead #4 (Archie Comics) Chip Zdarsky and Erica Henderson's run reinventing Jughead remains as genuinely entertaining as it began, even as it hews close to the formula of a middle section dominated by a genre fantasy or dream sequence kinda sorta relevant to the real world action book-ending it. At the climax, Jughead has finally convinced a few classmates that his weird conspiracy regarding the new principal is, in fact, a reality, so it will be interesting to see where the title goes once the conflict of this first story arc is resolved.

Once more there is a section featuring a few classic Jughead strips, with another great intro from Zdarsky, making the $4 cover price seem acceptable, rather than a Marvel-style gouging. I'm actually kind of hoping Zdarsky manages to find a way to work Souphead into a future narrative...

Oh, and here's an early nomination for the Sensational Character Find of 2016: Crowny. 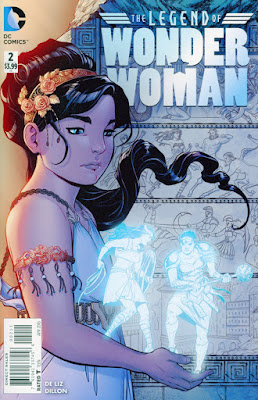 The Legend of Wonder Woman #2 (DC) The Good Wonder Woman Comic would probably be a more accurate name for Renae De Liz and Ray Dillon's nine-part limited-series, but I can see why DC went with the cooler-sounding Legend of, but man, does this ever make DC's other Wonder Woman comics look awful in comparison.

This substantial, 30-page chapter is so satisfyingly dense that it feels much longer than it actually is; unlike so many comics, this actually reads like a part of a graphic novel. By which I don't mean it's "written for the trade," simply that it is a big, epic, well-paced story that was apparently conceived and created as a whole, and is being broken into and published in chapters. More than a comic book series, this actually reads like a serialized graphic novel.

De Liz's script takes us through the remainder of Diana's girlhood into her young adulthood, with a well-placed montage in the middle, and while I confess the talk of immortality vs. mortality among the Amazons feels a little questionable to me, it seems part and parcel to what De Liz has planned for their society (which seems to have its own villains), and a conflict intended for Diana. That is, not only is the character facing a tension between what she wants from her life (adventure, the inevitable journey into "Man's World") versus what her mother wants for her (to stay safe on Themyscira, to rule as its queen someday), but she is also being positioned to have to choose between immortality and mortality.

There is a lot to like about this series, including the rather effortless way De Liz ties ancient Greek culture with Marston/Peter craziness (see: Kangas) and thornier aspects of the Wonder Woman story (oh, hey Troia). My favorite bits were the way in which De Liz reverse engineered a rationale for Wonder Woman choosing a lasso as a weapon, and the fact that when Steve Trevor eventually falls from the sky, as he must, it seemed as portentous and mythological as any of the elements of actual myths included.

As I said on Twitter the other day, while it's still early in the book's run, The Legend of Wonder Woman seems poised to be for the character what Batman: Year One is for Batman. 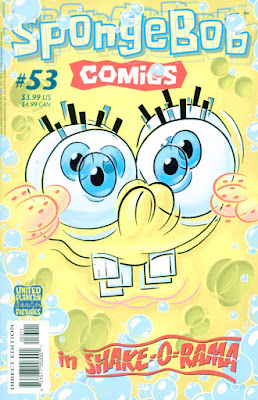 SpongeBob Comics #53 (United Plankton Pictures) Okay, I confess: The "Shake-O-Rama" technology actually worked quite well during the earthquake scenes, at least as it pertains to the art. Reading the dialogue during a Shake-O-Rama scene? Not so much. Still, it's not only a clever element to a perfectly serviceable SpongeBob story, it's also a nice, sharp dig at the current, gimmick-obsessed nature of the direct market comics industry, which seems to have gone "full nineties" of late.
Posted by Caleb at 4:27 PM

If any DCU band is going to share a bill with Black Canary, wouldn't Great Frog be the logical choice?