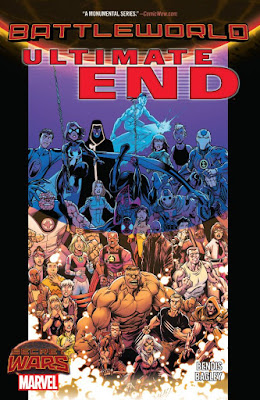 Jonathan Hickman's years-long Secret Wars storyline involving a gradual-but-accelerating collapse of the multiverse reached its final act, the end of his two Avengers books and the beginning of the Secret Wars miniseries, with two remaining universes about to collapse into one another. These were, of course, the "real" Marvel Universe, the shared-setting of the vast majority of Marvel's comics, and the Ultimate Universe, the shared setting of the long-struggling Ultimate line of comics.

The five-issue Ultimate End miniseries, reuniting Ultimate Spider-Man's original creative team of Brian Michael Bendis and Mark Bagley, was to be the final (one might even say "ultimate) story of the Ultimate Universe. I had assumed, completely incorrectly, as it turned out, that it would focus on how various characters in the Ultimate Unvierse were dealing with the multiversal "incursions" (Ultimate Reed Richards is a major player in Hickman's storyline), or, perhaps, it might detail the final battle between the Ultimate universe and the Marvel universe, or, at the very least, it might detail how the stars of the Ultimate universe spend their last days.

No dice, it turns out.

Instead, Ultimate End is just one more story of a "domain" of Battleworld, the patchwork, temporary Marvel universe created by Doctor Doom to save (and seize control over) what was left of the multiverse. If you've read any Secret Wars tie-ins, then you know what that means: It basically allows for an anything-goes, What If... story, generally using the title of a very popular past event as a title. Here the What If... is a particularly awkward one: What If...The Ultimate Universe and the Marvel Universe Characters All Lived In The Same City and Stopped Being Polite and Started Getting Real?

It actually took me much of the first issue/chapter to understand that this labored construct of a premise was the premise, and even then, the longer one thinks about it, the less sense it makes, at least within the greater construct of Secret Wars. With the now god-like Doom having re-created the world in his image, in all of the other tie-ins (and Secret Wars itself, of course), the sometimes bizarre set-ups are the way it has always been as far as anyone other than Doom and Doctor Strange knows, but here the characters all seem to be aware of the merging of their universes from the very start (we literally see Marvel Tony Stark appearing out of nowhere before Ultimate Tony Stark)...but to also be inherently aware of the "rules" of Battleworld. Different characters show different levels of comfort and familiarity with the set-up, and it varies from scene to scene.

In short, I wasn't convinced that Bendis himself knew exactly how Secret Wars and Battleworld were supposed to work, which lead to a lot of shoulder shrugging and disbelief re-suspension while I was reading.

So all of the characters seem to be semi-organized into their own respective factions, and to be somewhere between confused and freaked out by their dopplegangers. They also all seem to remember their own past lives, and to be aware of the fact that they come from different universes. Marvel Universe Spider-Man, for example, remembers his interactions with Ultimate characters, and goes to visit Ultimate Aunt May and Ultimate Gwen Stacy, the three of them all aware that they don't belong to one another, but are very similar to the ones they do. When The Punishers meet, the Marvel Punisher is convinced the Ultimate Punisher is a Skrull, for some reason, despite the fact that there seems to be at least two of every other character running around. And so on.

The two Tony Starks, who are convinced that the other had something to do with the current state of affairs (due to the fact that Ultimate Tony bought a tear between the universes from Ultimate Amadeus Cho previously), eventually call a truce and start working together to figure out what the deal is, exactly.

As usual, Bendis is strong on scenes and weak on plot. There are a couple of neat running gags, like the fact that every one in the Ultimate Universe knows that Spider-Man is Peter Parker, and keeps saying it out loud, and I always like the way Bendis writes Spider-Man dialogue (I may have even snickered when he told the Sam Jackson-inspired Fury how good he was at yelling).

There seems to be a chapter missing in here, as the book's through line seems to involve the Ultimate Punisher, but it doesn't actually go anywhere. (By the way, Utlimate Punisher kills his own Marvel equivalent by throwing a knife into his heart faster than Marvel Punisher can pull a trigger, which I call bullshit on; surely the older, more experienced Punisher would come out on top of a Punisher vs. Punisher fight, right?) When the two factions of heroes go to war in the final chapters, they do so for the most spurious of reasons, and the decision to return to their respective corners and fight it out is missing. In one scene, the two Tony Starks come to different conclusions regarding what to do with their findings (One wants to present them to Doom, the other does not), in the next the two armies of superheroes are slugging it out, presumably over this very issue.

Ultimate Spider-Man II Miles Morales, missing througout most of the series, swings in, explains Secret Wars to the characters, and then they all go off to fight in the climax of Secret Wars, this "domain" fading to white and Miles waking up in the Marvel Universe.

Again, the individual scenes are all okay, but they don't really hold together, with certain things getting quite a bit of build-up and leading to nothing (The Punisher), while other things have no build-up and turn out to be important (Miles). Of all the Secret Wars tie-ins I've read so far, this seems to be the one that stands on its own the most poorly, for two contradictory reasons: First, it ties in fairly closely to the main Secret Wars series (at least in regards to the comings and goings of certain characters, and the resolution) and, secondly, it seems to be in complete violation of the "rules" of Secret War/Battleworld throughout.

As for a final farewell to the Ultimate Universe, it's extremely lacking. Aside from the characters from the Ultimate Universe I mentioned, none of the others really get speaking parts--I think Ultimate Cap may get a line or two--and none of them really get proper endings to their stories. That has been a major failing of the Ultimate line in general, though. Despite the fact that the limited nature (by sales as well as by conception, as after so many years it would begin to suffer the same problems that lead to its creation) of the line meant Marvel could have done Cerebus-style, beginning-to-end stories of the like that Spider-Man, The X-Men and The Fantastic Four will never, ever get in the "real" Marvel Universe, Bendis and his Ultimate handlers generally just "ended" various Utlimate characters' stories by suddenly and violently killing them.

Just looking at the cover of the trade (the cover of the first issue of the series) there are a large handful of characters I don't recognize at all, and they don't really appear in any greater depth within (there's a character referred to as "Ben" who looks Human Torch-ish, for example. Ultimate Ben Grimm? Ultimate Ben Urich? Ultimate Uncle Ben's ghost? I don't know!).

Nor do Bendis and Bagley even provide the most shallow, surface-level thrills one might want from a meeting between the two universes. Namely, who would win in a fight? The two Hulks fight, but mostly off-panel. The two Punishers fight, but that entire confrontation lasts for less than a page. If you've spent years wondering which Hulk was the strongest one there is, or who the better Iron Man is, or how badly "Do you think this A stands for France?" asshole Cap take out former Falcon Captain America, or whatever, you won't find out here (It occurs to me that this series really could have used the sort of nothing-but-fights Vs tie-in that Avengers Vs. X-Men got).

Ultimately a disappointment, I suppose this is actually a fitting final story for Marvel's Ultimate Universe, which became increasingly disappointing after the departure of Mark Millar, and the Ultimate line basically consisted of Brian Michael Bendis' Spider-Man book, and constant attempts to reinvent the other characters until the line reached the point that Marvel could do away with the whole thing by simply moving Bendis' Spider-Man into their main line.
Posted by Caleb at 10:55 AM