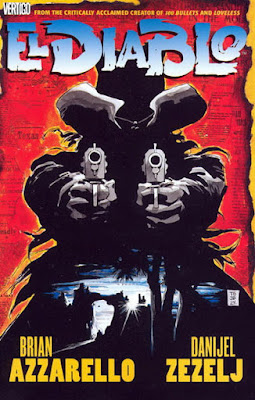 Brian Azzarrello and Danijel Zezelj's 2001 Vertigo miniseries El Diablo represented one of several attempts to make use of the Robert Kanigher/Gray Morrow Western character with the colorful name, following Gerard Jones and Mike Parobek's 1989 effort to create a more superheroic version of the character and preceding Jai Nitz, Phil Hester and Ande Parks' 2008 effort to cast the character as an immortal spirit of vengeance/legacy character.

Azzarello's version of the character that appeared in these four issues--and the 2008 trade collecting them--technically fits in with the DC comics that preceded and followed, as the character acts as a vengeful, supernatural agent, but he's a particularly nasty one. In fact, he's so brutal and savage in his treatment of some of his victims that one could read this with the understanding that El Diablo is literally The Devil. Interestingly, he's not the protagonist of the story, and gets relatively little panel-time.

Towards the end of the second issue/chapter, when a posse that has set out in search of El Diablo are sitting around a campfire and telling stories about him, the name Lazarus Lane and his original origin story come up. But the character spends most of the story as a shadowy figure--bearing little more detail than you can see of him on that cover--that appears and disappears. The only lines he speaks are variations of "Hssss." He is seen in the distance, shooting people down impossibly fast. He often lingers just off-panel, so that we can see, say, the knife he's holding, but not he himself.

When we do get a rare glimpse of him, he doesn't look like the classic version at all. Artist Danijel Zezelj has redesigned him so that he is a long, lanky figure in all-black cowboy garb, with bare arms. He has long stringy hair, and scary cat-like eyes and sharp teeth. He rides a huge white horse, and he seems to be able to turn into various desert animals, or at least we see animals leaving the scenes where he apparently was at one point or another.

The title character's smaller-than-expected role befits his savagery (one victim, who drunkenly boasts about how he plans to lynch the devil by his own pointy red tail, has his gust cut open and is hung from a tree by his own intestines...and set on fire for good measure) and the nature of the story. While this is technically a Western, it's also a horror story, and monsters, like omnipotent villains, don't always make for the best protagonists.

The actual protagonist is Sheriff Moses Stone, who, before settling down as an agent of law and order in the town of Bollas Raton (and as a husband trying to start a family with his beautiful wife), used to be a notorious bounty hunter known as "Holy" Moses. His life is radically upended when the mysterious El Diablo arrives in town. The mysterious figure guns down a saloon full of bad guys, ties Stone up and then carves the name of Stone's home town into the flesh of his back with a knife.

So Stone gathers a posse and rides after El Diablo, headed toward the ironically-named town of Halo. Gradually we learn more and more about Stone and his own shadowy past, and why the devil might be so interested in him. Between El Diablo and Stone, the bodies of characters pile up almost as quickly as they are introduced, and Azzarello manages a few good gut punches by the conclusion, including an extremely satisfying irony.

In addition to a Western and in addition to being a horror story, El Diablo is also something of a mystery, something of a thriller and something of a character tragedy. Azzarello takes full advantage of the license the Vertigo imprint allowed him, and the book is as full of swearing, violence, killing, nudity and sex as one might expect from a post-Deadwood, deconstructionist style genre exercise.

Zezelj, who is here colored by Kevin Somers, isn't an artist I would have immediately thought of as particularly well-suited to a Western milieu, but his mildly-exaggerated figures (mostly around the heads and hands) and heavy reliance on stark blacks prove perfect for the black and white morality of El Diablo, where people are either good, or bad, or worse or a fucking devil. Black patches of ink appear so frequently that the title character, who is mostly just a silhouette with the occasional muzzle flash attached, seems more or less natural in such a visual environment.

I'm fairly certain that this has gone out of print (looks like it's available on Comixology, if that's a thing you do, along with Azzarello's later Vertigo Western Loveless), and anyone interested in the El Diablo character thanks to the derivation of the Nitz version that showed up in the recent Suicide Squad movie probably won't find exactly what they're looking for should they find their way to this. On the other hand, this is a pretty effective story about the diabolical cowboy as a spirit of vengeance, and such stories tend to work best when the agent of vengeance plays a role, but not the starring role.

Azzarello and Zezelj do a strong enough job on the Stone story arc that one could imagine a very similar story being told and having a similar level of impact without El Diablo in it at all. That probably doesn't sound like a ringing endorsement of how well they use the character, but I meant it as such: El Diablo is a remote, unknowable force un-gently prodding and shepherding Stone to the fate he himself chose. That journey is the story they tell here.
Posted by Caleb at 10:58 AM