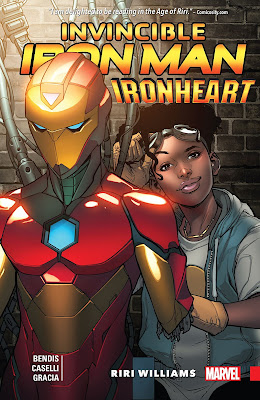 The last time I was in my local bookstore, I saw the above collection on the shelf: Invincible Iron Man: Ironheart Vol. 1--Riri Williams. I haven't yet read it, but that is the very latest collection of Brian Michael Bendis' tenure on the Iron Man character. That tenure began in December of 2015 and, in the past 19 months, the book has already been rebooted once, which means there are now two books out there called Invincible Iron Man Vol. 1 that are both written by Brian Michael Bendis.

It's not exactly the most reader-friendly pile of books to attack, and not just because there are four different books labeled "Vol. 1" in there. One would imagine that you could start with any of those volumes with the 1 on the spine and be in a pretty good place, but if you're terribly interested in characters like Riri Williams and Victor Von Doom and want to see their earlier introductions into Bendis' narrative, then you're going to want to tackle those other books too (Perhaps more so for Riri than for Doom, as she was first introduced in these books by Bendis, where as Doom obviously has a pretty long history in the Marvel Universe in general, before Bendis started using the newer, post-Secret Wars iteration as a supporting character).

This problem isn't unique to Bendis' Iron Man comics, of course. Like, I wouldn't want to try reading his Guardians of The Galaxy run, which is replete with reboots, miniseries and one-shots, and I think I would need a coach to walk me through recent Captain America comics. God help someone brand-new to comics wandering into that aisle of the book store and thinking to one's self, "Self, I think I'd like to try and read an X-Men comic book."

At any rate, I'm not sure how the publisher's Legacy branding effort, which will include returning to the original numbering, is going to help at all. If they just knock off the new #1s and reboots, then, sure, that would help (Ironheart, for example, should just be Invincible Iron Man Vol. 4 or Vol. 5). But since the individual issues will be using some practically random number--if I had to guess, it would be a huge number in the high hundreds that is arrived at by Marvel adding all of the issues of Iron Man published under any title ever together--it will have the effect of a new #1--"Oh, this is Invincible Iron Man #679...did I read #678? No, what was the last issue I read? What was the last issue that came before this one?"--and, even if they use that as their last re-numbering scheme for the foreseeable future, it doesn't exactly help with the trade situation (There's an Infamous Iron Man Vol. 2: The Absolution of Doom on Amazon with a December release date, and an Invincible Iron Man: Ironheart Vol. 2 there with a January 2018 release date).

The more I think about it, the more I realize that the absolute best way to read Marvel comics might not be to wait six months or so after they are published, and show up in trade (which is how I've been reading them, although I do occasionally lose track and just give up among all the reboots and retitlings, as I did with Bendis' Guardians books and Jason Aaron's Thor run), but instead to wait, like, two or three or five years and see if Marvel releases them in big, hardcover omnibuses that curate them for you...

Of course, in two or three or five years, I can't be sure I will care about things like, say why Benjamin Grimm is a member of the Guardians of the Galaxy, or why Victor Von Doom is an Iron Man or whatever...

Anyway, when I saw Bendis' second Invincible Iron Man Vol. 1 on the shelf of the bookstore the other day, I immediately thought of the "Legacy" initiative, and how it seemed that it will only make things more confusing in the short term, and that I can't imagine what it does to help the trade-reading problem...
Posted by Caleb at 6:13 PM

Seriously, yesterday I spent like ten minutes with a customer who had missed reading some issues of Invincible Iron Man. Several internet, Diamond, and ComiXology searches, we think we got it. Though I kinda even tried to send him off to go confirm before buying that, indeed it was the War Machines one he was missing, 'cause we were all so confused.

Reading on Marvel Unlimited isn't much better, especially if there is a crossover. Sometimes the app knows about a storyline and will help send you on a path through them all, but only for big events. If you're reading through New Avengers and it crosses over with, say, Avengers, or Uncanny Avengers, you have to click through the browse option and hunt down the right run of Avengers or whatever and find the right issue, and then hope tou remembered to bookmark New Avengers so you can go back and pick up the storyline there without clicking through browse again. Unlimited does not make collected editions available like comixology.