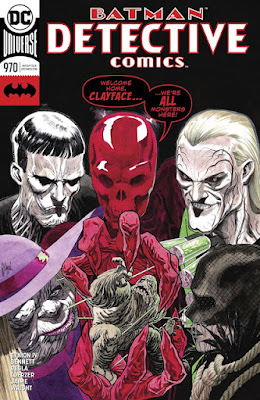 Detective Comics #970 (DC Comics) One thing about the bi-weekly shipping schedule of a lot of DC comics? Even when you drop a book, there's a good chance your local retailer has already ordered you the next one, so you may have to buy one more issue after you drop it. So I guess this is my last issue of Detective for a while. Although since writer James Tynion's run does seem to be reaching a climax, I suppose it's only going to be a few months before the next writer is announced. I will bet you five dollars it's going to be Brian Michael Bendis.

In this issue, Tim Drake and Stephanie Brown have a fight, Tim Drake seems to know that Lonnie Manchin is Anarky for some reason, even though he didn't appear until after Tim was dead, Batwoman, Batwoman, Azrael and Batwing fight some naked robot people, Clayface has a heart-to-heart with Doctor October, and Batwoman's dad gives her some stitches. So the plotlines all take a step or two forward.

Joe Bennett pencils while three different people ink; the art didn't looks so great this issue. Sometimes I like Bennett's work and sometimes I don't; I think a lot of it depends on the inking and coloring. This book is so over-colored, with lots of effects, and there is so much dialogue crowding out the art, that it was overall kind of a messy-looking book.

Guillem March draws the cover though. I like that Guillem March guy a lot. I wish he was handling the interior art here. 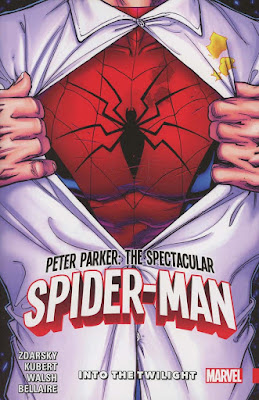 Peter Parker: The Spectacular Spider-Man Vol. 1--Into The Twilight (Marvel Entertainment) It's been about ten years since Marvel performed a franchise-specific reboot on their flagship character in "One More Day," cosmically disentangling Peter Parker and Mary Jane Watson because, as then-Editor-in-Chief Joe Quesada had argued, a single Peter Parker provided many more interesting story possibilities than a married one.

This collection of the first six issues of the latest volume of Peter Parker: The Spectacular Spider-Man included the first instances of a high-quality scene that could not have been published in-continuity if Peter and MJ were married. At one point early on, Spider-Man rescues an aspiring comedian who has just moved to the city, and she asks him out, throwing her business card at him and then being surprised that it bounces off and falls--she assumed that since he could crawl on walls, he was always sticky. Later, they go on a date, and Spider-Man arrives in costume, with a blazer; it doesn't go well for him, but it is an all-around pretty funny scene. So I guess it took a decade, but Quesada was proven right!

Thanks go to writer Chip Zdarksy, whose presence on the title is the main reason I picked it up at the shop today, rather than waiting a few weeks for the trade to appear at my local library. This might make me the only person, save perhaps a few of Zdarsky's friends and relatives, to pick up a new Spider-Man comic for him rather than Spider-Man or artist Adam Kubert. What can I say; I really liked Zdarsky's run on Jughead, and I was quite curious to see how he would handle the Spider-Man character in his own book, after seeing his use of Spidey in the excellent Howard The Duck (almost every scene featuring the character ended with Spider-Man on his knees, weeping about the death of Uncle Ben).

And it's not like I have anything against Spider-Man or his comics. The reboot was pretty dang alienating back then, and then Marvel jacked up their prices and their shipping schedule, and God-only-knows how many times they've relaunched Amazing Spider-Man. The not-very-helpful "Follow The Adventures Of..." reading order guide for The Amazing Spider-Man that runs on the front and back covers of this particular volume includes ten books, four volumes of Amazing Spider-Man, numbered 1-4, and then six volumes of Amazing Spider-Man: Worldwide, numbered 1-6. Interestingly, Zdarsky features a lot of call-backs to past Spider-Man and other stories, many of them in the form of little jokes (like an asterisk leading to an editorial box saying to "Check out Infamous Iron Man! Unless it eats into your Peter Parker: The Spectacular Spider-Man budget!).

The stories that seem to most inform this one, however, are even older, like the 2014 original graphic novel Amazing Spider-Man: Family Business, which is apparently about Peter Parker's super-spy parents. One need not be familiar with them to follow/enjoy the book of course--I wasn't!--and even these allow for jokes (says Johnny Storm, "'I'm Spider-Man! I'm the relatable super hero with relatable problems! Just ask my long-lost sister from my super-spy parents with Nazi G--'").

Jokes are actually what the book is all about, which is a good thing, because I have found that the very best Marvel comics of the last few years have been the funny ones, and Spider-Man is on the few A-List heroes at the publisher who works perfectly well with a more comedic take, as he of course believes himself to be something of a comedian, and is notorious among his peers for his bad jokes (Zdarsky even includes a two-page scene in which Spidey takes the stage at a comedy club, and bombs). Introducing a potential love interest who is a stand-up comedian and heavily involving Spidey's BFF Johnny Storm actually helps quite a bit; Zdarsky doesn't have to stretch to include jokes in this thing...the vast bulk of the gags are organic to the characters and the dialogue.

The format is a little unwieldy, and doesn't read that great in trade at the beginning, because of some publishing decisions for the single issues that don't quite translate to the trade collection format. It opens with a ten-page short story from Free Comic Book Day 2017 (Secret Empire) #1, by Zdarsky and not-regular artist Paulo Siqueira (and a surprising three other inkers, in addition to Siqueria himself). That features The Vulture, probably because there was a movie featuring Spider-Man and the Vulture released around the same time.

Then the first six issues of PP:TSS start, but the first of those was apparently over-sized, so there's a short eight-page story tacked-on between the Kubert-drawn chapters in #1 and #2; that short is well-drawn by Goran Parlov and features Black Widow attacking the hell out of Spidey as a favor to some SHIELD types, but interrupts the flow of the story. From there though, it's smooth sailing--although Kubert is replaced on the sixth issue by Michael Walsh.

Kubert does pretty good here, even though he's probably not the ideal artist for this particular take on Spider-Man.

The storyline involves a brewing conflict between tech guy to the villains, The Tinkerer and his brother, tech guy to the heroes The Mason, plus some cell phone mystery and, complicating all of that, the sudden appearance of Peter's fake sister, an rogue agent from a black ops, off-the-books SHIELD faction who stole a bunch of dangerous info by injecting the data into her bloodstream--she's now on the run from pretty much everyone in the world.

Meanwhile, Spider-Man tries might start dating, and Aunt May almost says "casual sex" out loud. The aforementioned Human Torch guest-stars, and there are also appearances by Ironheart, Ant-Man, Kingpin and Karnak, plus some regular Spider-Man supporting characters, the most notable of which is probably J. Jonah Jameson. JJJ gets a whole issue, as Spider-Man agrees to sit down for a one-hour interview with the newspaperman-turned-blogger in exchange for some info. It's a surprisingly emotional and momentous issue, with a real milestone in the two characters' relationship.

I'd highly recommend it.
Posted by Caleb at 8:51 AM