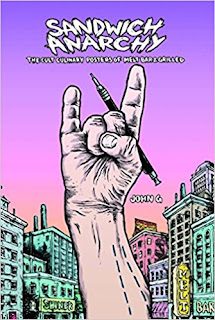 If you're a regular reader of Every Day Is Like Wednesday, then chances are you are familiar with Cleveland-based artist John G. from one of two places. He is the co-creator of the self-published horror anthology series The Lake Erie Monster, with Jake Kelly. He is also the co-founder of Genghis Con, Cleveland's annual small press and underground comics convention (which also happens to have the best name of any comics convention in the world).

If you live in Ohio, though, then chances are you're most familiar with John G. from his gig as the poster artist for Melt Bar & Grilled, the grilled cheese joint that started in Lakewood in 2006 and has since expanded to 14 locations. John was a prolific artist who regularly created posters for bands playing in Cleveland, generally taking a Derek Hess-like approach and crafting an image evoked by the names or sounds of the bands. Around 2008, he did his first Melt-related art for local alt-weekly Scene Magazine, which brought him to the attention of Melt's Matt Fish. That lead to a rather unusual collaboration, in which John would be responsible for drawing a poster for the monthly sandwich specials.

Years later, that added up to a lot of posters, and Sandwich Anarchy: The Cult Culinary Posters of Melt Bar & Grilled (1984 Publishing) collects them into an art book as unusual as John's work and the Melt menu.

The basic approach for his posters has always been gig posters for sandwiches, and the elaborate construction of Melt's various special sandwiches and their clever names provide plenty of opportunities for an artist like John to riff off of. Take, for example, The New Bomb Turkey, a sandwich named in honor of Columbus punk band The New Bomb Turks. It's ingredients? Smoked turkey breast, "mom's homemade sage stuffing," roasted butternut squash puree, sweet cranberry dipping sauce and muenster cheese. It's basically Thanksgiving dinner, stuffed inside a grilled cheese sandwich.

Because that is a popular sandwich and is featured every November, John had to come up with new posters for it regularly, and most of these riff on turkeys or Thanksgiving in some way (a hand turkey, turkeys in Browns and Steelers uniforms playing football), although a few feature both turkeys and bombs (a member of the Melt bomb squad cautiously approaching a turkey all wired up with a detonator, a mushroom cloud in the form of a turkey).

Or there's General Tso's Delicious Manchu Dynasty Melt. The Chicken and Waffles Melt. The Rocktobernator. The Voodoo Zombie Jerk Chicken Melt. The Flying Falafel Melt. And so on.

Each poster contains all of the necessary information--the name, the ingredients, the locations and the dates--but at the center of each is John's imagery, typically working in a foregrounded drawing of the sandwich and a visual that has fun with the name, while John's own interests are often present, including the championing of a Rust Belt, Cleveland aesthetic and love of music and music culture.

Part of the fun of the collection is seeing all of John's posters at once, which allows one to see the recurring characters and attendant dramas that he fills them with. The Hungry Hungarian Melt features an anthropomorphic polar bear in the winter time, his family steadily growing from poster to poster. The Melt Pig Roast features a wolf man with an eye patch engaged in various conflicts with pigs. The Prime Time Prime Rib Melt features an anthropomorphic bull who is also a boxer, usually engaged in a fight with an anthropomorphic chicken, and we get fight posters, a Muhammad Ali homage, an image based on Mike Tyson's Punch Out, a manga-style action shot of a punch being throw, etc.

Because Melt created sandwiches to tie-in to Cleveland Cinema's cult classic late shift events, there are a lot of sandwiches based on movies, and these lead to some fun posters, and fun-sounding sandwiches--even if you couldn't pay me to eat most of them, even the vegan versions. The Gizmo Chicken and Waffles Melt (to go with Gremlins), the A London Style Fish & Chips Melt In America (to go with An American Werewolf in London), The Queen Mother Alien Melt (Aliens) The Lord Humongous Turducken Melt (The Road Warrior) and on and on. 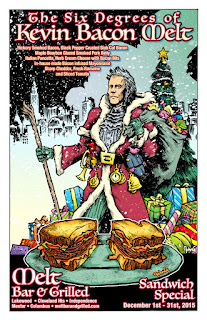 Some of film-inspired sandwiches are on the regular rotation or always on the menu, like The Godfather, The Dude Abides Melt and so on, and there are a few specialty sandwiches meant to coincide with the release of popular films, two of the Star Wars-themed sandwiches having the best names--Vader's Thai Fighter Melt and The Obi Wan Canoli Melt.

Oh, and then there's the Six Degrees of Kevin Bacon Melt, which naturally has six different forms of bacon (hickory smoked bacon, black pepper crusted slab cut bacon, maple bourbon glazed smoked pork belly, Italian pancetta, herb cream cheese with bacon bits and bacon-infused mayonnaise...with sharp cheddar, lettuce and tomato), and appears in the book at least as many times as The New Bomb Turkey, which means John must continually think of different ways to draw Kevin Bacon, usually using a scene from a movie, and occasionally just riffing on him in weird ways (like the Kevin Bacon-as-Saint Nicholas-for-some-reason poster).

Basically, these pop culture sandwiches allow John G. to draw trolls, Robocop, Eddie Murphy, the cast of Dazed and Confused and others into his art, and they become part of the inky, gritty iconography just as much as the animal-headed people and robots that populate John G.'s world. 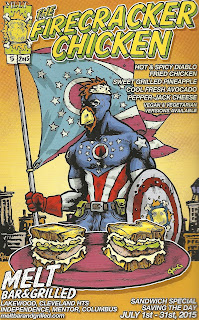 Of perhaps special interest to comics readers are his posters for The Firecracker Chicken sandwich, which started with an image of a Captain America-like supehrero with the head of a chicken, and gradually morphed into a "Captain Ohio" (think Captain America, but with the Ohio flag as the basis of his costume instead of the American flag), fighting alongside a Wonder Woman-esque chicken-headed lady against robot fascists with "FF" armbands. The "FF" stands for for "Fast Food." 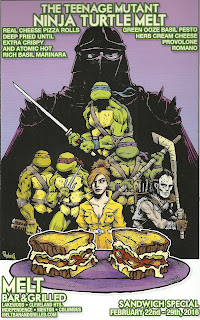 And, as I've mentioned on the blog before, he's drawn several Teenage Mutant Ninja Turtles posters. These were for The TMNT Cowabunga Pizza Roll Melt, which sounds fucking awful (deep-fried pizza rolls, marinara sauce, "green ooze" basil pesto cream cheese, provolone and romano cheeses, with optional pepperoni). Commenting on his first poster, featuring the four turtles, John wrote "It's tough to draw the Ninja Turtles in your own style since they are so iconic," which sounded insane to me, but, well, maybe John hasn't read all that many Turtles comics.

Anyway, I really like his Turtles. I guess he was going for a more realistic version of the movie turtles--the first poster coincided with a showing of the original live-action film--but in general his ink-heavy artwork and various washes actually suggests Kevin Eastman's art. John G. Ninja Turtles wouldn't look out of place on an IDW variant cover, really. There are five TMNT images in the book all together: The aforementioned group shot, solo images of Michaelangelo and Donatello, an image featuring their weapons and a pizza design and another group shot that adds The Shredder, Casey Jones and an April in her cartoon yellow jump suit.

The 200-page book features a brief, two-page introduction by John G., and then devotes a page apiece to the posters, each with a sentence or two worth of commentary below, in which John G. talks about some aspect of the work, from inspiration to reception to a detail that might not be immediately obvious. At the end of the book, there are two pages on process, and then a nine-page chronology, showing all of the posters in order of their release in postage stamp-sized images, 30-ish to a page. These include all of those featured in the previous pages, plus 50 others.

It's definitely worth a look, although fair warning--chances are you're going to want to visit a Melt after reading.
Posted by Caleb at 7:32 PM