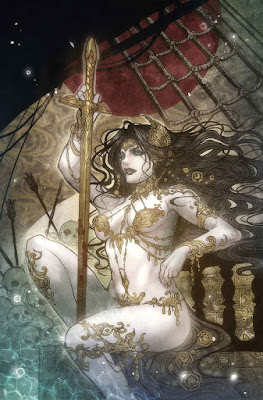 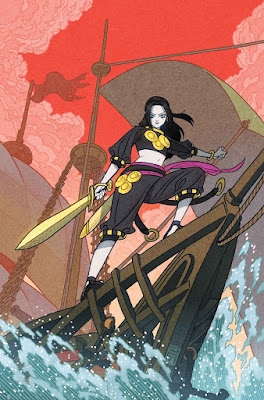 AGE OF CONAN: BÊLIT #1 (OF 5)
TINI HOWARD (W) KATE NIEMCZYK (A)
Cover by SANA TAKEDA
VARIANT Cover by AFU CHAN
...
THE SHE-DEVIL OF THE SEA WHO WOULD BE QUEEN!
BÊLIT. The name alone conjures fear up and down the coasts of the Hyborian Age. And the sight of her ship, the Tigress, is an omen of despair for any town in the pirate queen’s path!The AGE OF CONAN kicks off with one of Conan’s most formidable — and memorable — female compatriots, in an all-new story revealing how she became the undisputed QUEEN OF THE BLACK COAST!
The teenage Bêlit, obsessed with the sea — as well as the monsters and treasures she thinks are summoning her there — stows away on the ship of the dread Admiral ATRAHASIS into a deadly adventure even she could not predict!
PLUS: The first chapter in an all-new BÊLIT prose novella, presented here for the first time!
32 PGS./Parental Advisory …$3.99

Oh good, I thought Marvel might not be predictably over-producing Conan comics immediately, but it appears they are adding new titles at a pace of about one new book a month.

At least this one's just a mini-series, I guess.

Having never read any of the prose stories, and precious little of Robert E. Howard's writing, I've no idea who this character is. I assume both of those cover images are of her, though? I'm 90% sure the first one is by Sana Takeda, and the second one by Afu Chan. They are both nice-looking images in completely different styles, but I like the second one better. Neither indicates what the actual interior art will look, like though; Kate Niemczyk drew Chelsea Cain's excellent Mockingbird and is currently collaborating with Cain on the Image series Man-Eaters. 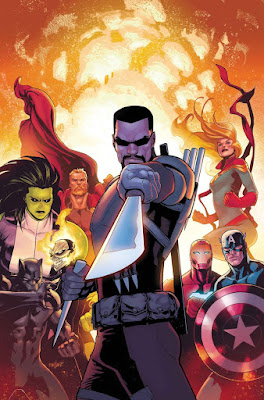 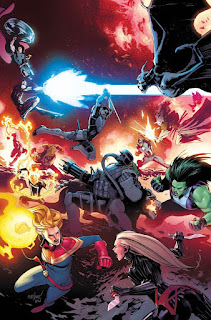 AVENGERS #17
JASON AARON (W) DAVID MARQUEZ (A/C)
SPIDER-MAN VILLAINS VARIANT Cover by LEE GARBETT
A NEW VAMPIRE ORDER!
The final fate of Dracula! The Avengers vs. Ghost Rider?! Blade vs. the Shadow Colonel! And the world of the Marvel U vampires will be changed forever. Who will be the new Lord of the Damned?
32 PGS./Rated T+ …$3.99

Blade as the reluctant king of a nation of undead, a sort of vampire answer to Black Panther...? Yeah, I can dig that. 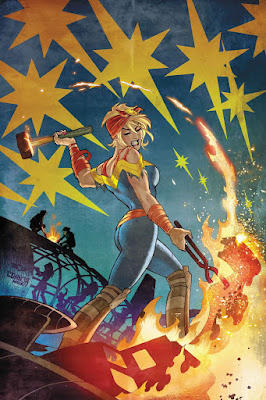 I like this cover. It's for the new Captain Marvel book, which I probably won't read because I think Carol Danvers is the super-boring and the interiors won't look like the covers. But I do like the cover. 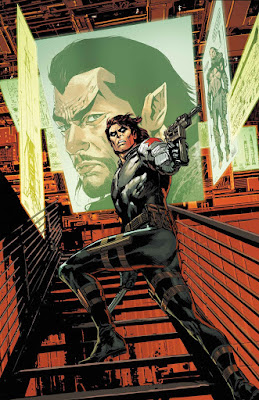 INVADERS #3
CHIP ZDARSKY (W) CARLOS MAGNO with BUTCH GUICE (A)
Cover by BUTCH GUICE
“WAR GHOSTS” CONTINUES!AMERICA is readying for its final war with ATLANTIS! It’s a race against the clock as the WINTER SOLDIER infiltrates the military and CAPTAIN AMERICA confronts NAMOR’S human allies alongside the ORIGINAL HUMAN TORCH! Can they get to the bottom of NAMOR’S plan in time?
32 PGS./Rated T+ …$3.99

Oh, so that's why Namor never wears a beard! 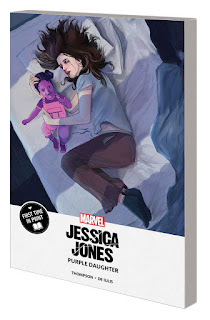 JESSICA JONES: PURPLE DAUGHTER MPGN TPB
Written by KELLY THOMPSON
Penciled by MATTIA DE IULIS
Cover by MARTIN SIMMONDS
FIRST TIME IN PRINT! The critically acclaimed team that brought you JESSICA JONES: BLIND SPOT is back! When her daughter, Danielle, comes home with purple skin, Jessica Jones is forced to question everything she thought she knew about her time with the Purple Man and her marriage to Luke Cage! As Jessica digs deeper than ever before into the darkness at the center of her life, will she find relief — or yet another nightmare? Brace yourself for another thrilling, chilling tale that will challenge everything you think you know about Marvel’s top P.I.!
136 PGS./Parental Advisory …$19.99
ISBN: 978-1-302-91511-7

I can't wait to read this, given what an intense cliffhanger the previous volume ended on. I'm...not sure why this doesn't have a volume number attached, though; hopefully when it sees print there will be a "2" on the spine, and following the sub-title, or else book store customers and library patrons are gonna have a difficult time following this. More difficult than the fact that this is the third in a series of Jessica Jones-starring graphic novel series, of course. 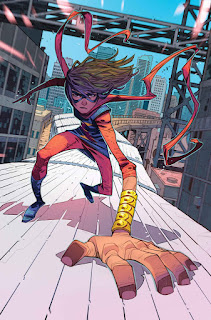 Oh my God. It's kind of hard to overstate how big a deal G. Willow Wilson not writing Ms. Marvel is, given what a wild (and, frankly) unexpected success that book has turned out to be. Regardless of where it might have shown up in month-to-month sales estimates, it has unquestionable been a huge hit in trade format in book stores and libraries, and the character has certainly caught on in a way that's remarkable for one so relatively new (I will not at all be surprised if Kamala's parents, or maybe even a little kid version of Kamala Khan, shows up in next year's Captain Marvel movie in a cameo).

Saladin Ahmed is a good writer, but Wilson is so associated with the character at this point, that I think whoever the new writer is would end up being under a ton of pressure, and with quite an uphill battle to fight, so best of luck to Mr. Ahmed!

I think the challenge he'll be facing is only going to be multiplied by the fact that Marvel is relaunching the book with a new number one and a new (kinda dumb) title (Hell, why not The Marvelous Ms. Marvel?). I imagine that means the first collection of this series will be Magnificent Ms. Marvel Vol. 1 rather than Ms. Marvel Vol. 12 or whatever, which means readers in the market the character has been most successful in may have difficulty following it past Wilson's departure or, at the very least, face a potential jumping-off point. 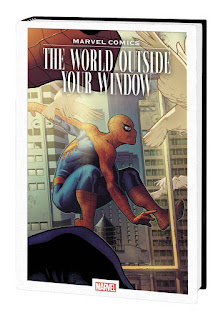 This looks pretty interesting. I'm not sure I need it on my bookshelf at this point, but I sure as heck want to borrow it from the library when it gets there and take a look at it. In many cases, the book's included are ones that I've heard about repeatedly throughout my time in comics, but haven't actually read myself.

The rating is somewhat curious, as a good three-fourths of these books would have been sold on newsstands and drug store spinner racks, years or even decades before Marvel started rating their comics at all. 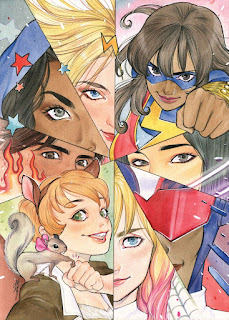 MARVEL RISING #1 (OF 5)
Nilah Magruder (W) ROBERTO DI SALVO (A)
Cover by AUDREY MOK
...
HEROES OF THE ROUNDTABLE!
With the powers of GIRL and the powers of SQUIRREL on their side, Kamala Khan and Doreen Green are an unbeatable team! But that title is about to be seriously challenged — because New Jersey has been invaded by a swarm of knights in shining…suits?! Driving cars armed with javelins?! Uh-oh. Kamala and Doreen are gonna need allies to help protect their home turf — and they know just who to call. Don’t miss the return of the team-up that’s got everyone talking!
32 PGS./Rated T …$3.99

I rather enjoyed the Marvel Rising collection I just read, but none of the writers involved with that seem to be attached to this, unfortunately. I'm not familiar with Magruder at all, but I'll definitely take a looksee when this is available in trade in, um June or so, I guess. 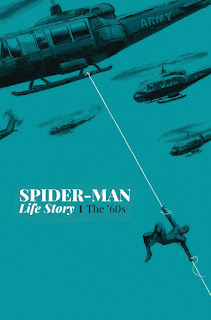 SPIDER-MAN: LIFE STORY #1 (OF 6)
CHIP ZDARSKY (W) MARK BAGLEY (A)
Cover by CHIP ZDARSKY
...
In 1962, in AMAZING FANTASY #15, 15-year-old Peter Parker was bitten by a radioactive spider and became the Amazing Spider-Man! Fifty-seven years have passed in the real world since that event — so what would have happened if the same amount of time passed for Peter as well?A special high-end limited series that’s a part of the celebration of Marvel’s 80th anniversary, SPIDER-MAN: LIFE STORY combines the talents of Chip Zdarsky (SPECTACULAR SPIDER-MAN, MARVEL 2-IN-ONE) and Mark Bagley (AMAZING SPIDER-MAN, ULTIMATE SPIDER-MAN) to tell the entire history of Spider-Man from beginning to end, set against the key events of the decades through which he lived!
In this first oversized issue, when Flash Thompson is drafted to serve during the Vietnam War, Spidey must weigh the question of where his responsibility truly lies!
40 PGS./Rated T …$4.99

This is a really good idea for a comic book series. I hope it lives up to its promise. 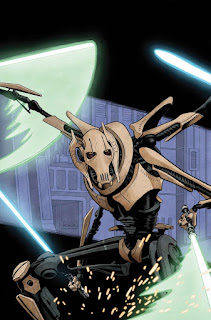 STAR WARS: AGE OF REPUBLIC – GENERAL GRIEVOUS #1
JODY HOUSER (W) LUKE ROSS (A)
Cover by PAOLO RIVERA
...
THE FEARSOME SEPARATIST GENERAL STRIKES!
In his hunt to kill Jedi, GRIEVOUS stumbles across a power greater than he imagined.
What secrets will the killer cyborg find inside a lost Jedi temple?
Can Grievous strike a blow against the very FORCE itself?
32 PGS./ONE-SHOT/Rated T …$3.99
Star Wars © Lucasfilm Ltd. & TM.

General Grievous is probably never going to live up to the unparalleled badassery he demonstrated in the Genndy Tartakovsky Clone Wars micro-series, is he...? 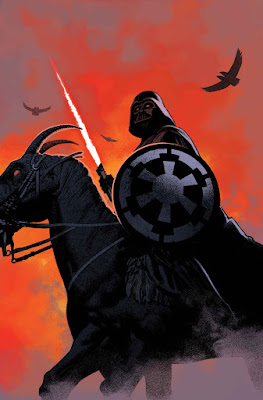