A comics journalist, an author, a newspaper comic strip writer and a comics festival executive director, Tom Spurgeon was one of the best champions and best friends that the comics medium has ever had. Like seemingly everyone I know or know of that has anything to do with comics, I appreciated his work to a degree that is hard to overstate.

I interacted with him online, and he even interviewed me once—an incredibly strange experience for me as a former journalist, as I had interviewed hundreds of people before, but never been the interviewee. However I never met Tom in real life, despite having the opportunity to do so several times at a couple of the Cartoon Crossroads Columbus shows, mostly because I am anxious and anti-social and never know how to introduce myself to people I only know from the Internet.

That said, it was rare a day during the past 15 years has gone by in which I didn't hear something from Tom. Not personally, of course, but through his invaluable website, The Comics Reporter. When I first started thinking about comics blogging in 2005 and 2006, The Comics Reporter was always one of my first stops online every morning, even on weekends, when I knew there would be less content. As other sites came and went, or went in directions that didn't interest me, or as more and more bloggers transitioned away from long-form writing and into the micro-blogging of Twitter, The Comics Reporter never dropped from my morning Internet-reading ritual, even as its format shifted. Tom Spurgeon, then, was a part of my life; there are days, weeks and, in some cases, months, where I might not hear from people as close as my mother, my father, my brother and sisters or the people I consider my best friends, but I would still hear Tom saying something every day.

His voice was a valuable, even invaluable one. He covered everything in comics because he cared about everything in comics. While many—far too many—outlets covering comics online tend to cover genre, or, perhaps, format, Tom covered the medium. Superhero comics, alternative and underground comics, newspaper cartoons, political cartoons, international political cartoons, European comics, literary comics, mini-comics, manga, kids comics, webcomics...to Tom, comics were comics, and thus they deserved to be covered.

Which isn't to say that Tom, despite his universal interest in the medium, was an expert on every aspect. But when he would link to are share a few words about an area of the field he wasn't as steeped in as others—the ins-and-outs of byzantine superhero crossover stories, or the latest manga—he would often somewhat sheepishly talk about that as if it were a failing of his, of something that needed to be corrected. During the years I read The Comics Reporter, I can't tell you how often I've seen him say that he's not yet caught up on something, or that he needs to take the time to learn more about a particular creator's work, or that he wishes he were familiar with a particular area of comics and hoped to do better in the future. It was always phrased thusly, rather than his dismissing some chunk of the medium.

Personally, I always appreciated that Tom made me feel like I mattered, and that I too was a part of comics. No matter how many times he linked to my work, even when it was just blogposts here, I would get a little jolt of excitement seeing my name appear on his blog, but more than that, it was his listing of me as part of a city's comic book "scene" (even though, for me, it was more geographic than anything, given how antisocial I always was), or interviewing me as I mentioned, or including me in his daily lists of birthdays. I am not a comics creator—I mean, technically, I have created some comics, but I don't think anyone including myself would define me as such—nor am I particularly widely-read or influential voice on comics, so it was always weird to me to find myself included as a person who mattered enough to take note of my age (which is why he listed birthdays; more so than simply wishing people a happy day).

As many of you know, when I launched Every Day Is Like Wednesday, I lived in Columbus, Ohio. I had, in fact, just been fired from my job as an editor at the city's last independently-owned alternative newsweekly, which was then in the process of being purchased by the city's daily newspaper (actually, in their corporate-speak, I wasn't "fired," rather my "contract was being non-renewed"). The blog gave me an outlet to still write a couple hundred words per day, and gave me something productive-feeling to do between looking for jobs and trying to figure out what I really wanted to do in order to earn enough money to make rent and buy groceries. One of the reasons I was given for my not being kept on was that the paper was going to go in a different direction, and they didn't want to cover the sorts of things I covered; this was, of course nonsense, as we had a five-person writing and editing staff, so we all covered everything, but one of the things they specifically mentioned was that they didn't want to cover comics.

A few years later, I finally moved from Columbus back to northeast Ohio, closer to my hometown and my family. My biggest regret about doing so? Shortly thereafter, Tom Spurgeon moved to Columbus, a city that he quite rightly recognized as a good, maybe even ideal one for comics-making, for a variety of reasons we don't need to get into at this point. And, there with cartoonist Jeff Smith, his wife and Cartoon Books business partner Vijaya Iyer, Billy Ireland Cartoon Library & Museum founder and curator Lucy Shelton Caswell and others, Spurgeon helped assemble what seemed to me, in my limited experience, a perfect conception of a comics show, one based on European comics shows' integration of the festival into the city itself. So rather than sealing a show off in a convention center, visitors would be encouraged to visit Ohio State University's Wexner Center for The Arts, the Billy Ireland Museum, the Columbus Metropolitan Librarian and various points in between.

I can't tell you how much I regret missing that part of Columbus' comics history, no longer living within walking distance of where the world's greatest cartoonists were visiting. For a few days a year, it now seemed as if comics was coming directly to Columbus, rather than being something that happened in a nebulous "out there," accessibly solely through the screen of one's computer monitor. I worry about what will happen to CXC now, just as I worry about a comics Internet that no longer includes The Comics Reporter.

One thing Spurgeon has written about repeatedly on his site, spurred on I suppose by the passing of Joe Simon, Will Eisner, Stan Lee and some of the other giants of comic books who were there at its founding, is that we should all take the time to let our heroes or creators we admire know how much they mean to us while they are here, to, essentially, write fan letters to cartoonists, to let them know what they and their work has meant to us.

I never took that advice. I regretted not doing so when Norm Breyfogle, one of my favorite comics artists and one of the people whose work first got me interested in comics, passed away at a surprisingly young age. And I regret not doing so now, as Tom Spurgeon, a man whose words were a part of my daily life for much of my adult life now, is quite suddenly no longer here to receive a fan letter from me.

Although Tom passed away at a very young age of 50, and I think it wouldn't have been unreasonable to expect him to be around for another 30-45 years, it wasn't as shocking as it might have been had he not had a dramatic health scare in 2011. Here's what he wrote at the time, "All Of These Things That Have Made Us", and it bears re-reading now. Certainly no amount of my words about Tom are worth the words he himself wrote then.

My most sincere condolences to Tom's family and his many, many friends, peers and admirers in the comics field. And, to the spirit of the comics medium itself, I want to express my sympathy. I'm sorry for your loss, Comics; this is a terrible blow.

Whenever an important figure in comics would pass away, Tom Spurgeon would compile a "collective memory" list of links to everyone's articles, essays and tributes to that person on Comics Reporter. Tucker Stone at The Comics Journal is doing that for Tom now. If you haven't seen that post already, please take some time to do so. 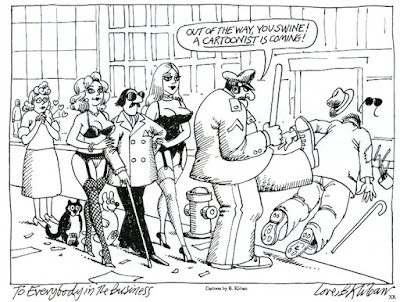 Tom Spurgeon has repeatedly posted this Bernard Kliban cartoon, noting that he identifies with the policeman in the image. He was joking, of course, but only by a matter of degree. His persona as a comics journalist, critic and writer was to go out into the world and try to clear a path for cartoonists. In his too-short life, he kicked a lot of swines' asses.
Posted by Caleb at 12:39 PM

Thank you, Caleb, for this and your other writing.

Thank YOU for reading...!