As with the last round of solicits, the two things that jump out at me here are that Empyre seems like a really big event, in terms of the numbers of titles, tie-ins and  page count (and it will only be half over in May!), and that the X-Men line continues to seem preposterously gigantic to me, particularly so soon after such a well-publicized "jumping-on point" as Jonathan Hickman's taking over of the franchise as its main writer.

Do you want to talk about the specific size of each? Okay, well, here are the comics with the word "Empyre" in the title, and/or Empyre logos emblazoned on their covers: Empyre #3, Lords of Empyre: Celestial Messiah, Empyre: Avengers, Empyre: Captain America, Empyre: Ghost Rider, Empyre: Invasion of Wakanda, Empyre: Savage Avengers,  Empyre: Spider-Man, Empyre: Stormranger, Empyre: Squadron Supreme, Empyre: Thor, Emypre: X-Men #1 and #2, Captain Marvel #18 and #19, Fantastic Four #22 and The Union #1.

That's 17 individual comics published during the third month of the event, each of which costs either $3.99 or $4.99, meaning that if you wanted to buy and read all of these from your local comic shop, you would be forking over $73.83 cents.

As for X-Men, it doesn't look like there's an issue of the title proper being published in May, but that's okay, as there are two-issues of Empyre: X-Men, co-written by Hickman, to take its place. Completists would be looking at Empyre: X-Men #1 and #2, Cable, Children of The Atom, Deadpool Excalibur, Hellions, Juggernaut, The Marauders, New Mutants, Wolverine, X-Factor, X-Force and, this month anyway, Giant-Size X-Men: Fantomex and 2020 iWolverine.  The majority of these are $3.99, although the Fantomex one-shot and the Empyre tie-ins are all $4.99.  So, if you are reading everything X, that would mean that in May you can look forward to spending $62.85.

Now, if you want the two X-Men reprints on sale in May, a facsimile edition of X-Men #12 and X-Men: God Loves, Man Kills Extended Cut #2, the that will put you up to $71.83, which is pretty much what someone reading all of Empyre would be spending.

So it looks like Marvel's event series is basically creating a line the size of their X-Men line, at least temporarily.

That's...so many comics. Anyway, here's what caught my attention this month, beyond the sheer number of the things... 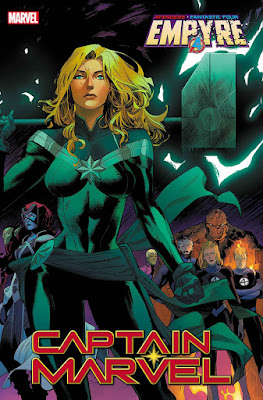 CAPTAIN MARVEL #18
KELLY THOMPSON (W) • CORY SMITH (A)
Cover by JORGE MOLINA
...
CAPTAIN MARVEL IS THE SUPREME ACCUSER!
In the throes of war, Carol finds herself with a bold new role – and a brand-new weapon – the Universal Weapon, in fact. When a Kree soldier bombs a unified city of the Empire, Emperor Hulkling sends his new Accuser to bring down the swift and necessary hammer of justice. But what at first seems like a relatively simple directive will end up challenging Carol on a personal level she had never imagined.
32 PGS./Rated T+ …$3.99

Say, if Carol is the new Accuser, shouldn't she do more than just change the color of her costume...? Shouldn't she also have to wear an elaborate headdress, like Ronan wore? Is the Accuser dress code not as strict as it used to be...? 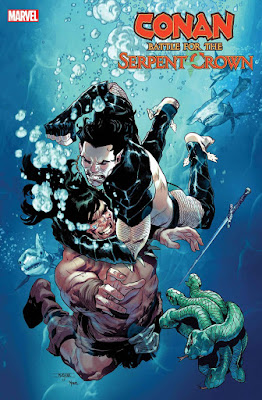 CONAN: BATTLE FOR THE SERPENT CROWN #4 (OF 5)
SALADIN AHMED (W) • LUKE ROSS (A) • Cover by Mahmud Asrar
...
IN TOO DEEP!
The SERPENT CROWN’s roots in the Pre-Cataclysmic Age lead CONAN back to where it all started…
…but ATLANTIS is not quite what it once was.
And even if he can locate the Crown, NAMOR isn’t going to let that treasure slip through his grasp!
32 PGS./Parental Advisory …$3.99

I know Conan has a reputation for being something of a tough guy, but I can't imagine he can hold his own against Namor, even on land. Heck, I was surprised he did as well as he did against Wolverine in the first Savage Avengers collection, and that he even killed multiple Hand ninjas. Like, I thought ninja were supposed to be really good at the art of fighting. 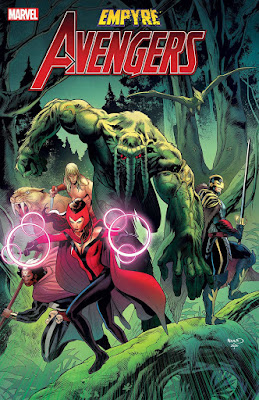 EMPYRE: AVENGERS #2 (OF 3)
Jim Zub (W) • Carlos Magno (A) • COVER BY PAUL RENAUD
...
Earth’s Mightiest Heroes fight an intergalactic foe on three fronts! In New York, a villain from the past has been super charged with alien energy. In Mexico, old hatreds turn allies into enemies. And in the Savage Land, the soul of the jungle has been stolen and Shanna the She-Devil’s life hangs in the balance. It’s mystery, magic and mayhem, in the Mighty Marvel Manner!
32 PGS./Rated T+ …$3.99

I kinda love the fact that the cover for this issue of an Avengers miniseries tied to the Empyre event has zero members of the current Avengers line-up on it, with Ka-Zar, one of the "Agents of Wakanda" that serve as the Avengers' broader support staff, being the closest thing to one of the team pictured. Of course, there are plenty of former Avengers present, and hey, Man-Thing! Anyway, it's just an appealingly weird-ass mishmosh of characters. 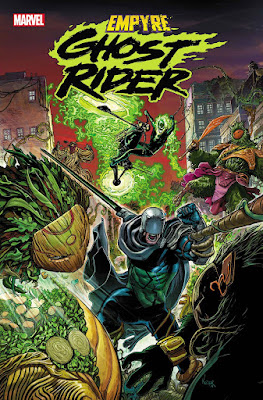 EMPYRE: GHOST RIDER #1
ED BRISSON (W) • JEFTE PALO (A) • COVER BY AARON KUDER
...
An intergalactic war comes crashing into a supernatural showdown between the Spirit of Corruption and the Spirit of Pollution! But who will be left standing?
40 PGS./ONE-SHOT/Rated T+ …$4.99

I am behind on Ghost Rider news, I guess. I don't know which Rider that is that has green fire (although it's a pretty cool look), nor do I know who the Spirit of Corruption and the Spirit of Pollution are. Are both of them on the cover? Because the one in the foreground seems to be lacking both flames and a thing to ride upon. 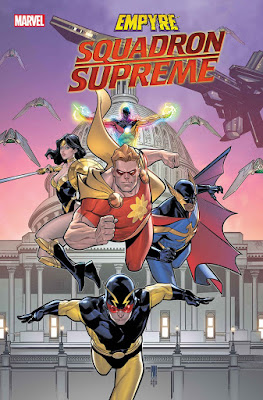 EMPYRE: SQUADRON SUPREME #1 (OF 2)
MARK WAID (W) • Dio Neves (A) • Cover by PACO MEDINA
...
The invasion has begun! But the alien invaders soon encounter resistance in the form of the Squadron Supreme of America! As the two forces clash, only one thing is clear…the fight for America’s survival has begun!
32 pages/Rated T+ …$3.99

Waid seems to be a pretty big name for a two-issue tie-in miniseries to an event series, but it should be interesting to see a former JLA writer tackle this new Squadron Supereme of America, which Jason Aaron and Ed McGuinness have positioned to be as Justice League-y as possible. Again, check out Nighthawk's scalloped cape, which is far more batty than hawkish. 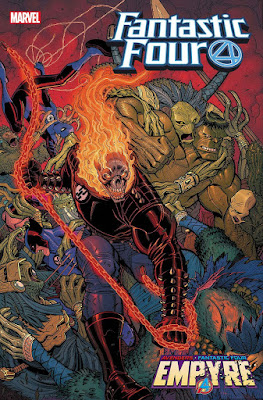 FANTASTIC FOUR #22
DAN SLOTT (W) • PACO MEDINA (A) • Cover by NICK BRADSHAW
EMPYRE VARIANT COVER BY JAY ANACLETO
...
The return of the new Fantastic Four?!
The events of EMPYRE threaten all life on Earth and the future balance of power throughout the cosmos!
And the secret mission that the FF have placed into Valeria and Franklin’s hands requires some big-league help!
32 PGS./Rated T …$3.99

Say, I like those costumes...! Well, Spidey's and Wolvie's, anyway; Ghost Rider's could certainly be more blue, and I can't see what Hulk is wearing. It took me a second to figure out Ghost Rider's chain icon on his chest, too. I think I might have given him a burning skull symbol, as that's the first thing that pops into my mind when I think of Ghost Rider, but then, maybe he thought that would be too vain.

I am assuming this Ghost Rider is the Johnny Blaze one, which, by process of elimination, would make the green fire one from Empyre: Ghost Rider Danny Ketch...? Unless there's a new Ghost Rider? Are they adding Ghost Riders to the modern Marvel Universe? Are we going to be at Green Lantern levels soon...? 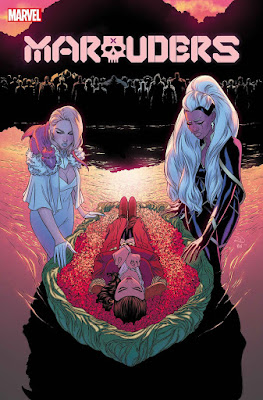 MARAUDERS #11
Gerry Duggan (W) • Stefano CASELLI (A) • Cover by RUSSELL DAUTERMAN
THE QUEEN IS DEAD!
The Marauders…the Hellfire Trading Company…all of Krakoa is reeling from the death of Kate Pryde.
32 PGS./Rated T+ …$3.99

Wait, Kitty Pryde is dead again...? I know I am old now and time is moving ever quicker, but it still seems to me like she just died/was thought dead. I know Marvel has long-since abandoned the "dead means dead" edict, but I think each character should be limited to one temporary death per generation or so. 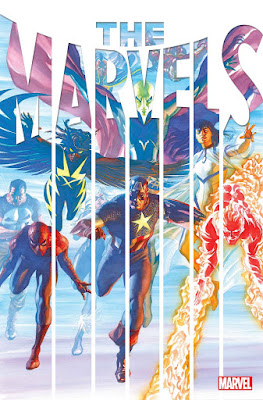 THE MARVELS #1
KURT BUSIEK (W) • YILDIRAY CINAR (A) • Cover by ALEX ROSS
...
ALL-NEW, ONGOING SERIES!
Kurt Busiek (MARVELS, Astro City) is back, with the biggest, wildest, most sprawling series ever to hit the Marvel Universe, telling stories that span the decades and range from cosmic adventure to intense human drama, from the street-level to the cosmic, starring literally anyone from Marvel’s very first heroes to the superstars of tomorrow. This first issue includes an invasion from orbit, a picnic in Prospect Park, super hero sightseeing in Manhattan, the All-Winners Squad in 1947, Reed Richards during his time in military intelligence, cosmic beings beyond space and time— and that’s only for starters. Featuring Captain America, Spider-Man, the Punisher, the Human Torch, Storm, the Black Cat, the Golden Age Vision, Aero, Iron Man and Thor, and introducing two brand-new characters, all beautifully drawn by Yildiray Cinar (X-MEN, Legion of Super-Heroes, IRON MAN) in the opening act of a thriller that’ll take us across the Marvel Universe…and beyond. Plus: Who (or what) is KSHOOM? It all starts here. And it goes...everywhere.
32 PGS./Rated T …$3.99

This is the single Marvel book in this round of solicits that I'm most excited about, partly because of Busiek's involvement, partly because of how big and ambitious it seems and partly because of my fascination with Golden Age superheroes in general. I don't really know what to make of it, but it sure looks interesting, and I'll look forward to reading it in trade. 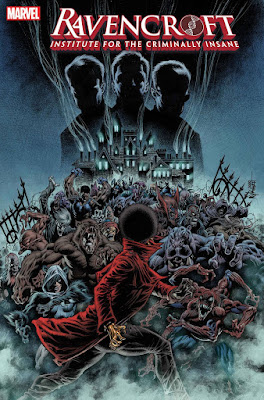 I know I haven't mentioned it since, um, last post, but that Kyle Hotz character sure is good at drawing things, isn't he...? 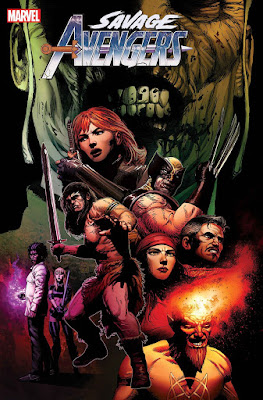 I'm excited to see how this book will read with a different artist drawing it, given how poorly the first collection read. And hey, Son of Satan is on the team...? At least temporarily? That's cool! I like Daimon Hellstrom. I wonder what look they're going with this--GAH! Why is his head on fire? Why does he have a long red goatee, kinda like the one I used to have, except infinitely better groomed...? Hellstrom's original look was so perfect, why are they always tinkering with it and making it so much less awesome...? 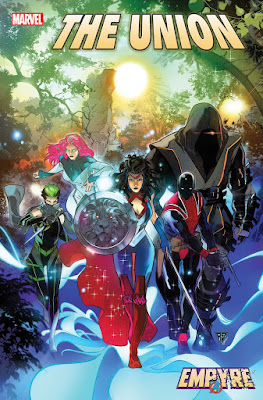 THE UNION #1 (OF 5)
PAUL GRIST (W) • Andrea Di Vito (A) • Cover by R.B. Silva
...
The grand unveiling of The Union! A team of super heroes gathered from all over the United Kingdom, featuring Union Jack, Snakes, Kelpie, Choir, and their fearless leader, Brittania! But when disaster strikes on their first public debut, in the form of the invasion of Empyre, the fledgling team is immediately pushed to their limits! Don’t miss out on an exciting new chapter of Marvel from legendary creators, Paul Grist (JUDGE DREDD, JACK STAFF) and Andrea Di Vito!
32 PGS./Rated T+ …$3.99

I'm pretty sure I only know who one of these guys is for sure (Union Jack), but the presence of Paul Grist is certainly intriguing, and probably reason enough to check it out. I just wish he was drawing it, as well as writing it.
Posted by Caleb at 1:51 PM

I'm not sure what you're thinking of with regards to Kitty Pryde having died or been thought dead recently. I can't recall anything like that happening since she got retrieved from that space bullet back around 2010.

Union has me considering pulling my only Empyre — and, well, only Marvel — because of Grist.

Also had me get out The Order for a re-read.