Marvel's Empyre event looks like it will be winding down in June, as the fourth and fifth issues of the series ship. The headline for Marvel's solicits at CBR, which is where I got these, reads "Empyre kills a hero," but I couldn't tell which issue that was meant to happen in from the solicitation copy. Not that there's anything at all shocking about killing a hero during the course of a big crossover event. Actually, usually more than one dies, one near the beginning and another at the climax.At any rate, most of the Empyre tie-in mini-series seem to be shipping their final or penultimate issues this month, and the only Empyre anything with a #1 attached is the Lords of Empyre: Swordsman #1 one-shot.

As ever, the movies have some visible influence on the publishing schedule, with a new Shang-Chi miniseries, some more Eternals collections and, among the many types of variants listed for various issue, something referred to as a "LIVING VAMPIRE VARIANT." That it is phrased thusly, and not as a "MORBIUS VARIANT", I'm curious if it means vampire—or, um "living vampire," I guess—versions of the various heroes starring in those books. Because a bunch of Morbius covers doesn't really sound all that engaging.

Also, among the more familiar types of variants like hidden gem, virgin, blank and party, I noticed two new ones: "Sneaker" and "Attraction." No idea what either of those might entail.

But enough idle chit-chat, let's look at some comics that will hopefully be available at your local comic shop in June, after the world has returned to normal! 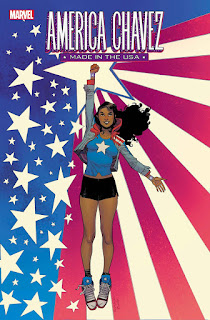 AMERICA CHAVEZ: MADE IN THE USA #1 (OF 5)
KALINDA VAZQUEZ (W) • CARLOS GÓMEZ (A)
Cover by SARA PICHELLI
...
WHO IS AMERICA?
America Chavez is incredible – her origins, her strength, her dimension-shattering star portals! But when the foundation of everything she believes is shaken, America will stand up and face the parts of herself she’s been running from. From writer Kalinda Vazquez (Marvel’s Runaways) and artist Carlos Gomez (Amazing Mary Jane) comes an explosive, brand-new story all about what made America Chavez who she is – and what she’ll do to protect the ones she loves.
32 PGS./Rated T+ …$3.99

I paused on writer Kalinda Vazquez's name for a bit when I saw the credit "Marvel's Runaways" in parentheses behind her name, because I had no idea who she was and I was fairly certain I had read every iteration of Runaways. Was she a fill-in artist on the series, and is now writing a comic for Marvel...?

But no, it turns out she was a co-executive producer on the TV show based on the comic, which I forgot existed on account of how bad I am at TV and just how many TV shows-based-on-comics there are now, and wrote two episodes of it. 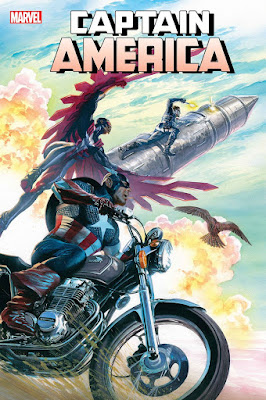 Now, I'm no superhero, but if I were James Buchanan "Bucky" Barnes, I think I would probably stay off of rockets. Like, maybe leave it to your friend with wings this time? Or call another superhero. Surely he can text Iron Man or Thor, right? There's no shame in asking for help if you need it. 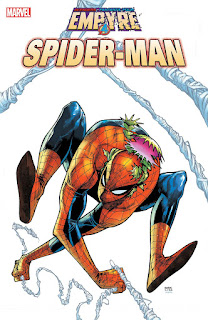 I like the cute little Venus flytrap guy that Humberto Ramos drew on the cover of Empyre: Spider-Man #3. 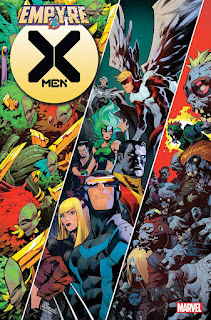 Huh. I was going to say that, based on the cursory description of the contents, this sounds like the solicitation-copy writer didn't have all the details yet, and was doing his or her best to fake it. But then I noticed all the holes in the creative credits too, like Hickman's co-writer being "TBA" and the artist for the third issue being "TBA"...

I have never read anything featuring or referencing "Lilith, spawn of Dracula", "John Kowalsi, agent of Death!" or "Hodiah Twist, detective of the supernatural!"...at least, not that I can remember. I assume that means these characters aren't as popular or prevalent as Ulysses Bloodstone or Manhpibian...? 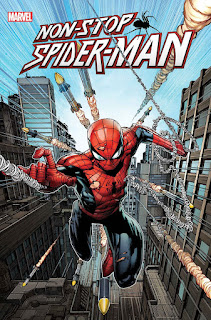 Is this a new on-going Spider-Man comic...? The lack of "[of 4]" after the one, and the word "one-shot" in the solicitation copy seems to suggest that it is, as does the ridiculous number of variant covers attached. Of course, if it is an ongoing, it's gotta stop at some point, right? Like, stories have to end, even superhero ones, if only briefly and in order to set-up the next one. Unless this is going to be an ongoing series with no story arcs and no end in sight until the very last issue, in which case, well, that's ambitious.

Joe Kelly and Chris Bachalo are both very good at what they do, and are both perfectly-suited to this character, so I'm sure this should be pretty good. 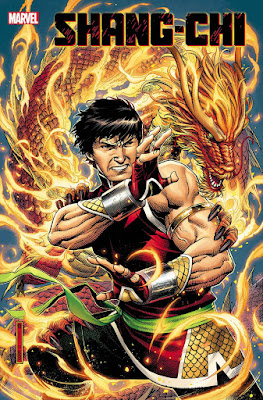 SHANG-CHI #1 (OF 5)
GENE LUEN YANG (W) • DIKE RUAN WITH PHILIP TAN (A)
Cover by JIM CHEUNG
Design variant by Jim Cheung
VARIANT COVER BY INHYUK LEE
VIRGIN VARIANT COVER BY INHYUK LEE
VARIANT COVER BY RON LIM
VARIANT COVER BY TBA
HIDDEN GEM VARIANT COVER BY RUDY NEBRES
SNEAKER VARIANT COVER BY TBA
THE MASTER RETURNS!
An ancient and evil secret society has stayed in hiding since the death of their leader, Zheng Zhu. But now his successor has been chosen to shift the balance of power in the world…Zheng Zhu’s son, Shang-Chi! Witness the Marvel Universe’s greatest fighter return to a world of death and destruction he thought he left behind long ago…and discover the secrets to Shang-Chi’s past that will change his world forever.
Don’t miss out on this epic tale of family, betrayal and justice as the incredible team of Gene Luen Yang (American Born Chinese), Dike Ruan (SPIDER-VERSE, BLACK CAT) and Philip Tan (UNCANNY X-MEN) launch a new chapter in the legend of Shang-Chi!
32 PGS./Rated T+ …$3.99

Hey, it's Gene Luen Yang! Fresh off of scripting Superman Smashes The Klan and writing and drawing Dragon Hoops! Yang is one prolific dude. I think he's a great "get" for either of the Big Two publishers, in the same way getting Dav Pilkey or Raina Telgemeier to script a comic book series would be (Well, maybe not the same way, but a similar way!). Of course, bringing Yang's audience to the work means marketing to them, and I don't think DC has always done the greatest job of that...Superman Smashes The Klan felt like the first DC work of his that I read that felt like his work, perhaps in large part because Gurihiru's art is more suggestive of Yang's own, and appealing to the audience for the books he both writes and draws, than the various artists DC assigned to New Super-Man and the other Superman books Yang wrote.

I'm not familiar with Dike Ruan's art at all, but just giving it a Google, it also looks to be similarly Marvel house-style than something similar to Yang's own work. I'm obviously no expert at selling Marvel comics to readers, but, personally, I would prefer to see Yang's Shang-Chi drawn by Yang himself (Is it weird that there's eight variants, and none of them are by Yang...? Maybe "TBA" will turn out to be him), or artists like Gurihiru or Sonny Liew.

As for the story, this seems like it is going to straighten out Shang-Chi's copyright-entangled origins in time for the movie, and given how often Yang has explored Fu Manchu-like characters in his comics work, he seems like an ideal candidate for the task. I just hope he can come up with kung-fu sound effects as well as Dough Moench can...

I'm not crazy about that particular cover, despite liking the fact that it looks a bit like the dragon is holding Shang-Chi back from a fight. Something about the big wrist-bands paired with the red and gold color scheme, and the quilted-look of the costume makes me think of The Shocker sans mask... 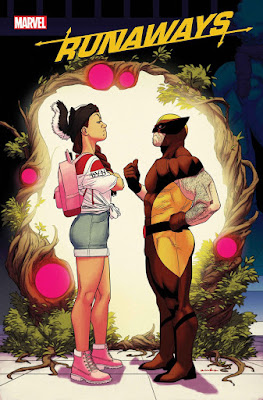 RUNAWAYS #34
RAINBOW ROWELL (W)
ANDRES GENOLET (A)
Cover by KRIS ANKA
• Wolverine and Pixie guest-star in RUNAWAYS and answer what Runaways fans have been asking for months: With the X-Men’s opening of Krakoa, the island-nation that welcomes mutants in existence, will Molly go?
• You may think you know the answer to that or what is going to happen here, but this comic is like its stars: They never do what they’re told or expected to do.
32 PGS./Rated T+ …$3.99

Oh man, this means I'm eventually going to have to wrap my head around whatever the heck's going on in the X-books, doesn't it...? 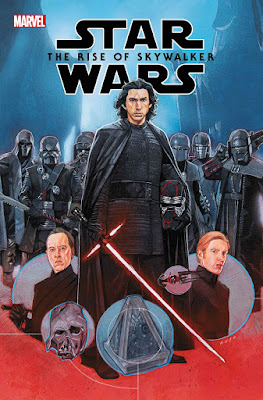 STAR WARS: THE RISE OF SKYWALKER ADAPTATION #1 (OF 5)
JODY HOUSER (W) • WILL SLINEY (A) • Cover by PHIL NOTO
...
INCLUDES UNREVEALED STORY!
FROM BEYOND THE OUTER RIM, AN OLD ENEMY RETURNS! REY and the RESISTANCE set out on a desperate quest to stop the threat of the FINAL ORDER! Can they succeed where Jedi Master LUKE SKYWALKER himself failed? And what is KYLO REN’S real goal in partnering with the resurrected PALPATINE? Jody Houser (TIE FIGHTER) and Will Sliney (THE RISE OF KYLO REN) adapt the landmark Skywalker saga, featuring extended and deleted scenes!
40 PGS./Rated T …$4.99
Star Wars © Lucasfilm Ltd. & TM. All rights reserved. Used under authorization. Text and illustrations for Star Wars are © 2020 Lucasfilm Ltd.

My first thought was to ask if this was an adaptation of the film, or the novelization, as the latter seemed to reveal more than the former. But I see there's a "INCLUDES UNREVEALED STORY!", as well as a bit about extended and deleted scenes. So maybe Houser was working from an earlier, better draft of the film...? I wonder if they can fix all the Leia bits, the ones that seemed obviously changed to work around Carrie Fisher's death, and give Rose Tico more to do than say, "Sorry, I gotta stay here and do homework!" when Finn asks her if she wants to co-star in a Star Wars adventure with the others. 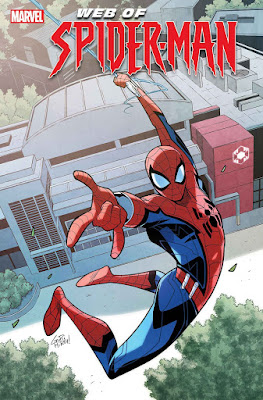 W.E.B. OF SPIDER-MAN #1 (OF 5)
KEVIN SHINICK (W) • ROBERTO DISALVO (A) • Cover by GURIHIRU
...
Peter Parker. Spider-Man. Scientist. Troublemaker?
Thanks to none other than Tony Stark, a new scientific research station for the teenage heroes of the Marvel Universe has just been completed – and Spider-Man just got an invitation to join! Working alongside some of your favorite faces from the MU and a whole bunch of awesome new gadgets, and with Iron Man keeping an eye on the them, surely everything’s going to go great for the heroes, right?
...Right?
Face front, True Believers, and treat yourself to this first issue in an adventure of the WORLDWIDE ENGINEERING BRIGADE!
32 PGS./Rated T …$3.99

Hm. Is this continuity? That particular version of the costume that Gurihiru drew on the cover isn't the standard one that Spidey's wearing these days, and the wording makes it seem like this is set sometime in the past, when Spider-Man was a teenager, but then it seems like there are many, many more teenage heroes in the super-science field in the modern Marvel Universe than any version in which Spidey would himself be a teen... 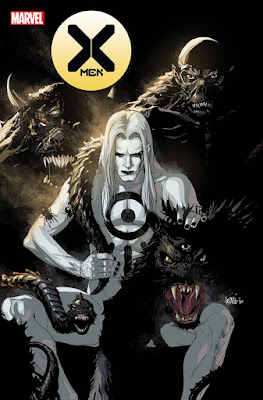 I don't understand anything about this.

That image would make a decent album cover, though.
Posted by Caleb at 3:41 PM