It's never too late for Batman to meet Godzilla. 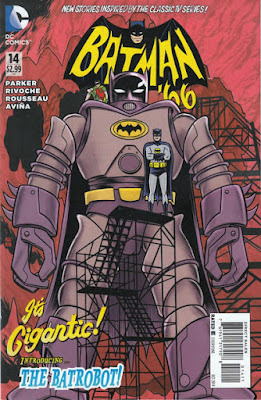 I've been reading a couple of John LeMay books that I got for my birthday, including Kong Unmade: The Lost Films of Skull Island and The Big Book of Japanese Monster Movies: The Lost Films (Mutated Edition). I sped through the first in a single weekend, and am still working my way through the latter, but both are fascinating, and well worth reading if you're a fan of King Kong and Godzilla (and other, similar kaiju films). In many cases, I had heard of particular pitches, proposals and productions or read some material about them online, but LeMay lays them out in far greater detail than I've usually seen (For example, Kong Unmade features a 20-page chapter about Peter Jackson's first, 1990s attempt at a King Kong film, which sounded like it would have been pretty great...if pretty '90s. LeMay summarizes the entirety of that film's plot, as well as Jackson's casting choices, like his Heavenly Creatures star Kate Winslet as Ann Darrow).

The reason I bring these books up here on my comics blog, though, is a film mentioned in both, and detailed in chapter 17 of the latter: Batman Meets Godzilla, which at least got as far as a couple of incomplete screenplays or treatments in the mid-1960s.

The information on the particulars of the never-to-be project's backstory is somewhat vague, as it often is in these attempts to reconstruct behind-the-scenes goings-on involving movies that never got made decades after the fact, but apparently a 38-page unfinished script was submitted to Godzilla's home studio Toho in 1965, and Batman '66 producer William Dozier was still considering a film with that title and premise as late as 1968, and he had a more detailed 20-ish page treatment that seemed perfectly familiar with the style and sensibilities of his TV show (It remains a mystery how much Godzilla's bosses at Toho communicated with Dozier, though; one assumes Dozier's treatment was fleshed-out version of a very basic Toho outline, although it's also possible that the two projects were embarked upon separately).

I don't want to merely repeat what LeMay has to say, so check out his book for more info, but he summarizes various scenes, and it's more to enough to at least suggest that he film might have proved rather awesome. Commissioner Gordon and his daughter Barbara are visiting Japan, when their cruise ship is cap-sized by a wave, and Batman and Robin come to the rescue. The wave was created by Godzilla, who is being controlled by a new, original villain named Klaus Finster. Among the events LeMay reports from the scenarios are Godzilla falling in love with Batgirl ("Love happens to Godzilla," the treatment apparently says), Batman distracting Godzilla with a Godzilla mating call, Batman and Robin fighting sumo wrestlers on a train and samurai actors in a Kabuki theater and the Dynamic Duo running around nude in a bathhouse wearing only their masks (because "they must honor tradition"). Oh, and at one point they meet the Tokyo police chief, Chief Sadakichi O'Hara.

While it doesn't seem like Batman ever grows big enough to take on Godzilla hand-to-hand, nor does he suit up in any kind of Batman giant robot like the one on the above Batman'66 cover, he does climb up Godzilla on a bat-rope, a scene that anyone who has ever seen any of the Batman TV show could likely picture quite easily, and plants enough explosives on Godzilla's head to knock him out.

As much fun as it is to imagine this film having reached fruition, in terms of the history of the franchises, I think I agree with LeMay that while it might have worked just fine as a Batman project, it doesn't seem like a particularly good Godzilla one, and Godzilla's mid-to-late 1960s output, as rocky as parts of it might have been, was probably better off for him in the long-run than if he played guest-star to Batman instead of appearing in Ebirah, Horror of The Deep or Son of Godzilla.

Of course, maybe we don't have to content ourselves with just imagining a meeting between Batman '66 and Godzilla, at least, not if DC Comics were to get involved, have someone track down the treatments and square away the licensing for a comic book crossover, prod the likes of Jeff Parker, Richard Case and Mike Allred into action and publish a Batman '66 Meets Godzilla series.

DC has already had Batman '66 meet The Green Hornet, TV's The Avengers Steed and Mrs. Peel, The Man From UNCLE and the characters from 1977's Wonder Woman TV show, plus Archie and the gang from Riverdale. Why not Godzilla...?  Heck, in addition to their various crossovers, DC has even published a Batman '66 special based on an unproduced script by Harlan Ellison in 2015's Batman '66: The Lost Episode.
Posted by Caleb at 1:00 PM