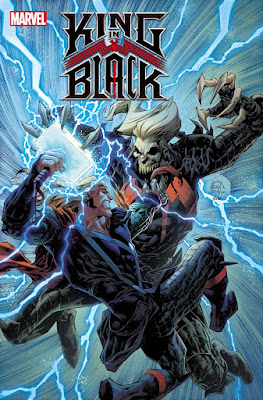 Well, if you're not interested in Marvel's Donny Cates-spearheaded King In Black event, then you might have some trouble finding something to read from Marvel in January. If I counted correctly—and there's no reason to believe I did!—the event accounts for 14 of their 70 or so comics release for the month. Of the remaining 53 comic book-comics release, 13 of those are X-Men titles, and 40 of those fall into all into the not-a-King In Black tie-in and not-an-X-book category.

The publisher, which has the Alien/s license for some reason now, is doing Aliens crossovers...on their variant covers, if not within any actual comic books. Yet. Most of these Aliens crossover variants are not too terribly interesting looking, but there were at least a couple of them that jumped out at me as kinda cool. 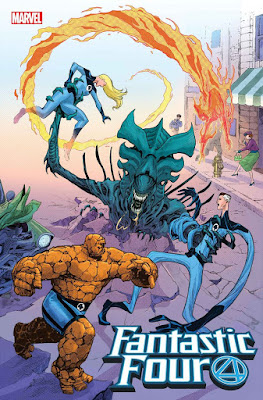 So Joshua Cassara's "Marvel Vs. Alien" cover is probably the best of the lot, at least among those that have been released so far. While I'm not crazy about every aspect of the rendering or anything, it at least has something to say, plopping an Alien-with-a-capital-"A" down into a "cover" version of one of the publisher's more famous covers. 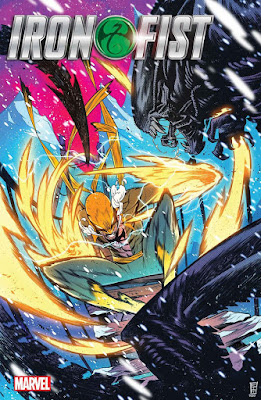 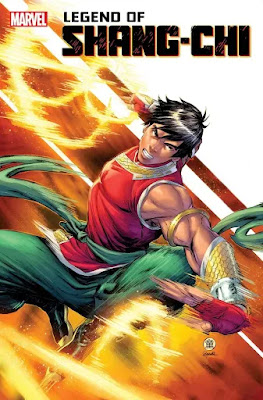 In other Marvel martial arts hero news, the Shang-Chi miniseries won't have even ended by January, but Marvel will already launching a new one, The Legend of Shang-Chi, by writer Alyssa Wong and artist Andie Tong, who is responsible for the pretty nice-looking cover image above. The overlapping of new miniseries makes sense; Marvel's going to want a lot of Shang-Chi product to sell when the movie eventually comes out (provided we ever get to the point that new movies start coming out again), and I don't think they have a ton of high-quality comics featuring the character, certainly not recent ones free of potentially problematic tropes and legally gray issues featuring the character's dad, lying around waiting to be collected into easily marketable trades. 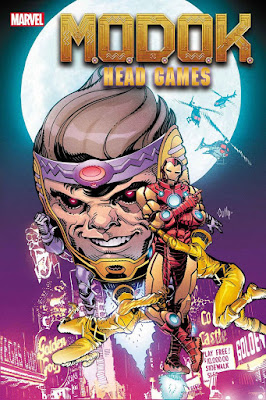 Is it just me, or does MODOK look...handsome, in this Cully Hamner cover for MODOK: Head Games #1, by writers Jordan Blum and Patton Oswalt and artist Scott Hepburn...? I can't tell if this is a one-shot or the first issue of a series; if the former, I would order it. 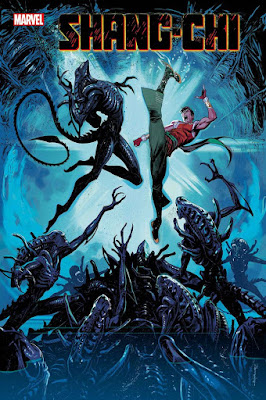 Artist Iban Coello's "Marvel vs. Alien" variant cover for Shang-Chi #5, the final issue of writer Gene Luen Yang's Shang-Chi miniseries, is the rare cool-looking one. I like the dynamism of the image, how human the Aliens look in their posing and their figures and the fact that, at the point in time the image depicts, things look completely hopeless for our hero while he remains defiant, seemingly winning in an ultimately losing battle. 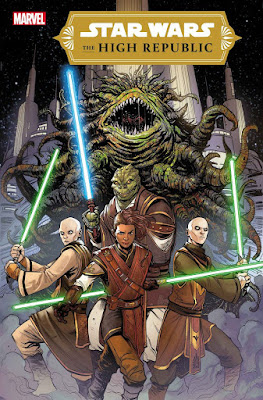 The latest Star Wars franchise push is going to be "The High Republic," a setting centuries before the time of the original Star Wars film. How does this differ from the Old Republic setting? I have no idea; I only read a handful of issues of a Dark Horse comics et during that time.
On the comics front, this means a new ongoing series under the Star Wars: The High Republic title, by writer Cavan Scott and artist Ario Anindito; Scott has written lots of Star Wars stuff, although I'm unfamiliar with the work of the artist.
I'm sure I'll interact with the "High Republic" setting somewhere eventually, either in comics or in an audiobook, but I'd be lying if I said the existence of this comic book alone made me extremely eager to do so. 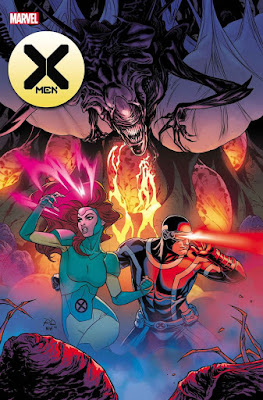 Russel Dauterman draws X-Men #17's "Marvel Vs. Aliens" cover, which depicts what is probably the least interesting potential conflict between some of their characters and the Aliens that Marvel could possibly publish, given the existence of The Brood. Like, readers have already seen the X-Men fight "Aliens" repeatedly, haven't they...?
Posted by Caleb at 1:45 PM