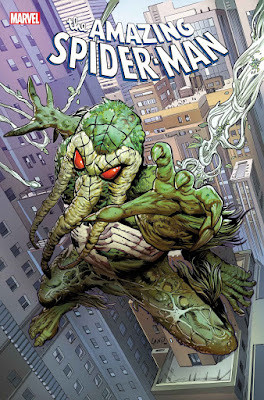 March is also when Marvel will begin celebrating the 50th anniversary of Man-Thing, Gerry Conway, Gray Morrow and company's 1971 Marvel Universe answer to The Heap. They will be doing so in a variety of ways, none of them as promising as the recent King-Size Conan comic celebrating that character's 50th anniversary (at Marvel), although I suppose it's still early, and they could publish a Giant-Size Man-Thing anthology or a month of True Believers reprints starring Manny.

First, they are doing weird-ass hero hybrid covers like Greg Land's variant for Amazing Spider-Man above, featuring "Spider-Man-Thing" (Ironically, that variant cover appears on an issue in which Spider-Man will debut a new costume; I think it's safe to assume it will not be that costume). Secondly, there's an Avengers series revolving around the character, which we'll discuss in a bit.

There are also apparently going to be "Women's History Month" variants, although I haven't seen any examples of them yet. I hope the latter are Alex Ross paintings of Susan B. Anthony fighting the Hulk or Elizabeth Cady Stanton swinging through New York City with J. Jonah Jameson tucked under her arm, but I suppose it will more likely just be pictures of Carol Danvers patting a little girl on the head.

Oh, and then there's this: 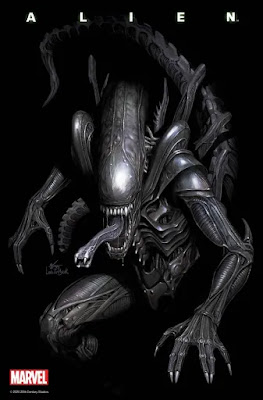 Marvel seems to be playing it pretty straight with their Alien #1, written by Phillip Kennedy Johnson and drawn by Salvador Larroca. That is, rather than jumping into a crossover with their superhero properties, which is what I assume most people expected/wanted when they heard the news that Marvel acquired that license from Dark Horse as well, they instead appear to be doing just another comic book spin-off, of the kind Dark Horse has done scores of, although this one doesn't look or sound particularly interesting in any way; that is, there doesn't seem to be a high-concept riff, a new direction or even an artist with an interesting style attached to the project.
There are a lot of variant covers, though. I counted 14, although the only one I really want to see is Skottie Young's. 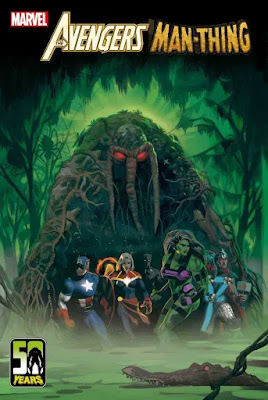 Avengers: Curse of The Man-Thing #1 will kick off a three-issue mini-series written by Steve Orlando and drawn by Francesco Mobili. Adding the Avengers in seems like a smart idea to keep the series above the radar, where few recent Man-Thing endeavors have managed to remain, no matter how high-profile the creator attached (See, for example, the R.L.Stine-written mini-series, which you likely forgot even existed).
As a fan of the character, I would normally be pretty excited about this, however there's the Orlando factor. Orlando's writing for DC has made me uncomfortable almost from the start, although I've sometimes struggled to articulate the precise why.
He tends to use the creations of other, older creators as plot points in his stories, but he chooses very specific ones that are very attached to particular creators (Like, I think there's a big difference between using The Gamma Gong vs The Ace of Killer, or Desperso vs Prometheus, or making a new Son of Vulcan vs a new Aztek). There might not technically be a solid bight line between using DC-owned IP and appropriation, but, personally, I can feel a point where it seems like a line is being crossed, and I used to feel a lot when I was reading Orlando's writing (And, less occasionally, Tynion's, whose Detective Comics run felt a lot like it was constructed of "cover songs" of the work of Chuck Dixon, Denny O'Neil and other '90s Batman writers).
Of course, then Orlando made it easy near the end of his Justice League of America run, the one which began in 2017 with him bringing back Keith Giffen and company's Extremists for no reason, when he wrote Alan Moore and J.H.Williams III and Mick Gray's Promethea into the proceedings, knowing full well that it would annoy Moore if he knew of it. (Heck, maybe Williams, too; he had a pretty public falling out with DC not too long ago).
That made moving Orlando into my Do Not Read column pretty easy, and now I no longer feel uncomfortable with his work...! 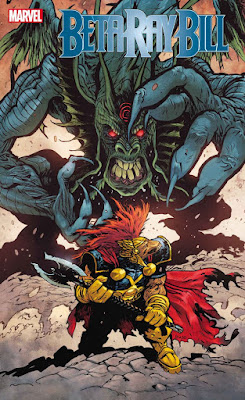 Beta Ray Bill #1 had me at "Knullified Fin Fang Foom," and I don't even know what "Knullified" means, exactly. I assume it's like being Venomized, except not as cool-looking? And you get a swirly symbol on your forehead...?
This is being written and drawn by Daniel Warren Johnson, who sure is having himself a March (he's got some high-profile DC Comics stuff as well). A writer/artist seems quite unusual for a Marvel comic...like, even more unusual for a Marvel comic than a DC one at this point... 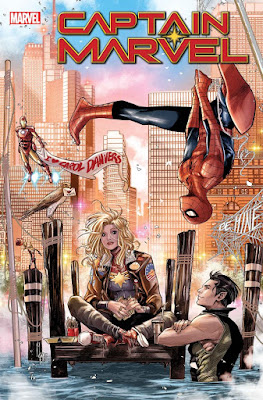 I know Namor has a type, but would he really be so enamored of a lady who eats fast food, including a drink with a plastic straw? That's going right down a sea turtle's throat.
This is a kind of cute cover concept for Captain Marvel #27, the solicitation for which promises "an intervention that looks a hell of a lot like speed dating."
If that's the case, I think she should go with The Falcon. A Redwing-delivered love note is a nice, romantic gesture. Spider-Man's kind of a loser (and isn't he still dating MJ?), Ant-Man certainly seems like one in his recent solo comics, Carol and Iron Man fought a war recently and Namor is...Namor. 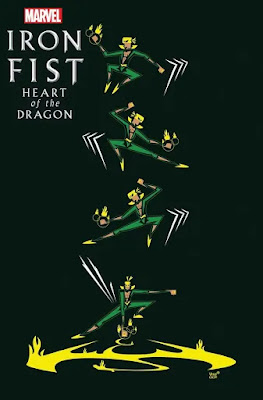 I like this Jeffrey Veregge cover for Iron Fist: Heart of The Dragon #3. 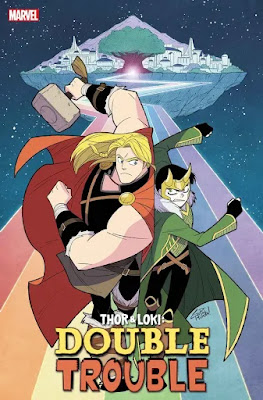 Would you like to hear a totally true story? After reading Mariko Tamaki and Gurihiru's Spider-Man & Venom: Double Trouble, I passed it on to my sister and nephew, who sometimes read comics together before bed. They loved it! They wanted more like it immediately but, sadly, there was no more like it. That is, no kid-friendly Spider-Man and Venom comics with a similarly silly sense of humor and light-hearted plot, nor any more Tamaki/Gurihiru collaborations.
Apparently, my sister and nephew weren't the only ones who demanded more like that, as the creators are re-teaming for another comic featuring two traditional rivals and the Double Trouble sub-title. My family will be pleased to hear of Thor & Loki: Double Trouble. Perhaps even more pleased than I. 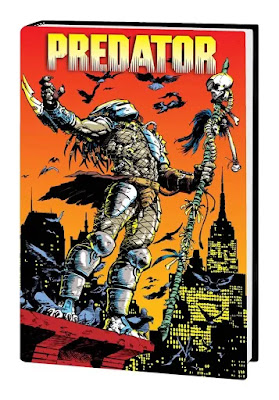 While we're on the subject of predation...
Since acquiring the license to Star Wars, which apparently gave them access to the huge catalog of the many Dark Horse-produced Star Wars comics, Marvel also acquired the license to Conan from Dark Horse. This, like Star Wars, kinda made a certain sense, as Conan, like Star Wars, began his comic book career at Marvel long ago, even if it didn't make as much sense (what with Disney now owning both Marvel and Star Wars).
But the Predator and Alien/s licenses...? Marvel has no history with those. Like, at all (Unless you count the the fact that they created the very Alien-like aliens The Brood a few years after Alien came out.) Heck, Marvel never even had the sorts of crossovers with Predator and Alien creatures the way that DC has over the years.
Now it just sort of seems like they are checking out Dark Horse's IP and, in legal maneuvers I don't understand, draining them away from them. I...don't actually know how that works, and if Disney absorbed Fox then maybe, from the standpoint of corporate synergy, there's something to be said for it, but I don't know; Disney seems A-OK with Fantagraphics and Dark Horse and IDW and Viz and others publishing comics starring Disney cartoon characters or Star Wars comics, so...
Anyway, Predator: The Original Years Omnibus Vol. 1 is a $125, 1,000+-page collection of Dark Horse comics from as far back as 1989. I've only read a handful of these, including the original Predator series by Mark Verheiden, Chris Warner and company—in fact, it was one of the first trade paperback collections of comics I ever purchased—but I remember being shocked out what a great sequel it was to the original Predator film, and how much better it was than the actual, film sequel, Predator 2 (starring Dutch's brother as the protagonist, they even could have gotten Arnold Schwarzenegger to play the lead in it!). 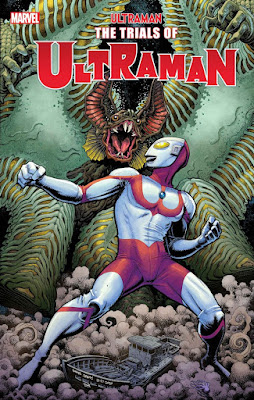 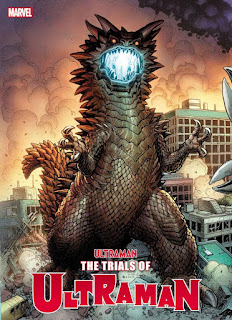 It looks like Marvel will be going the series-of-mini-series route with the Ultraman license, as the character returns in the redundantly titled Ultraman: The Trials of Ultraman #1. This looks to be an ongoing important source of Arthur Adams monster drawings, which is fine by me, even if he's confined to the covers while a Francesco Manna handles the interior art. 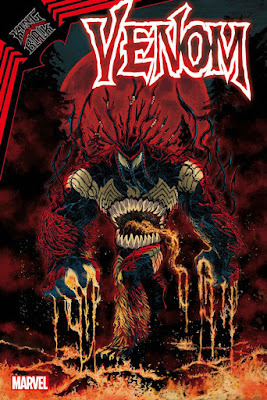 Venom #34 is apparently "the series' final tie-in" to the "King In Black", so the vent will not, in fact, go one forever, but the real reason to care about it is Superlog's variant cover, of a Venom/Man-Thing mash-up. It took me a bit to figure out why he has a massive mouth in his stomach, not unlike the cryptid/folkloric Amazon monster the Mapinguari is said to have, but then I remembered Man-Thing doesn't have a mouth, and Venom's big, drooly tongue is kinda integral to his design, so Superlog had to put a mouth full of a teeth and a tongue of some sort somewhere. The abdomen seems a prefect place for it, actually.
...
Now I kinda wanna read a Superlog Man-Thing comic...
Posted by Caleb at 8:21 AM