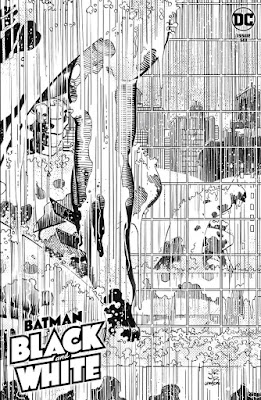 There are a lot of talented, popular and exciting contributors to Batman: Black and White #6, but the one I am most excited about is Elsa Charretier, a regular contributor to IDW's various Star Wars comics. If you asked me who would be the best artist to draw a Batman comic, Charretier would be one of the first suggestions I had. Her art is dynamic and graceful, and has a classic, almost stately feel to it; it reminds me a bit of Alex Toth's art, and I think she would be perfect for a very particular vision of Batman, that of the dashing, two-fisted, adventuring detective, a guy in tights and a cape rather than the brutal, unstoppable warrior in body armor we too-often get these days. 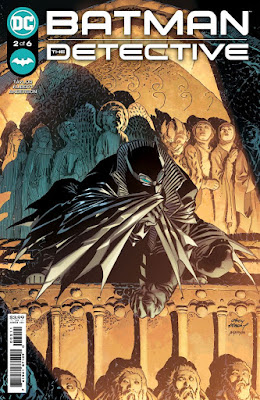 Last month DC solicited new comic by Tom Taylor and Andy Kubert entitled Batman: The Dark Knight, which I thought was a terrible title for a new Batman comic, given how many comics already exists with some formulation of that title. This month they're solicited Batman: The Detective #2, so they appear to have renamed the title. That's good. Batman: The Detective is a much better title for a new and original series, and will, in the long run, make it easier for people trying to find and read this book. 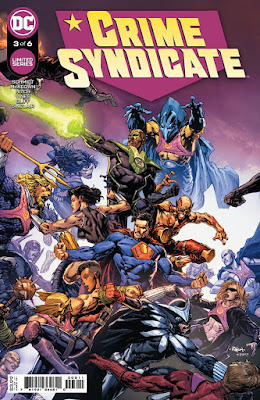 I'm not sure I like Earth-3's Starro, which seems to come in the easily wearable tank top form, rather than the classic face-hugger form. That's David Finch's cover for Crime Syndicate #3, by Andy Schmidt and Kieran McKeown. There's also a variant cover by Babs Tarr... 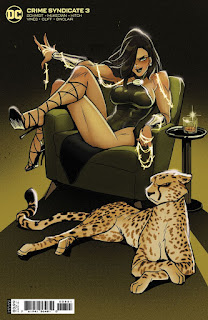 ...which I like much better, but then, I'll always take Babs Tarr over David Finch. Do note the look on that cheetah's face on the cover. How evil is Earth-3? So evil that even the animals are total assholes! 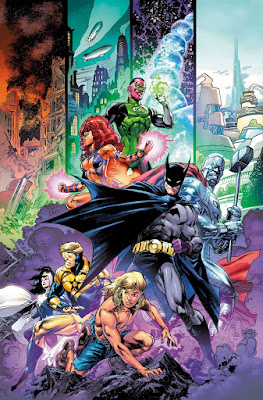 Um, so there's a solicitation for DC Comics: Generations HC, which collects January's $9.99 Generations Shattered and February's $9.99 Generations Forged (plus the short story from Detective Comics #1027 in which time-traveling Kamandi recruits First Appearance Batman), and the whole thing will cost you $29.99. I guess I'm glad I didn't trade-wait this storyline...? I sure hope there's a fuckton of bonus material to justify the price, or even just an afterword explaining what DC's continuity is. I'd sure pay $10 to know that continuity is settled once and for all.
I'm a little surprised that that's all there is to the story though, because, as I said at the time, Shattered didn't feel like the first half of a story so much as the first quarter or sixth of a story. 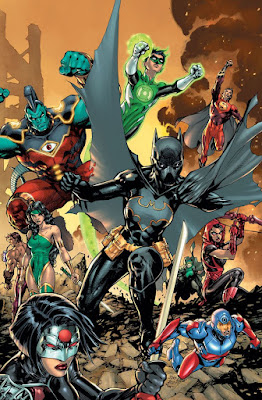 While the cover for DC Festival of Heroes: The Asian Superhero Celebration #1 isn't quite a full-blown self-own, it's certainly in that general neighborhood, drawing attention to how few prominent characters of Asian descent DC Comics has in their vast character line-up, how relatively little-used in the comics they are and, in some cases, how ill-served the characters are by those comics.
The character front and center, the "star" of the cover, the one that is, if we're being honest, probably DC's most high-profile character of Asian descent, is Cassandra Cain, seen drawn here by Jim Lee in a slightly off-model version of her Batgirl costume. But the volume of Batgirl that she starred in was canceled in 2006; the Batgirl name was reclaimed by a succession of white girls starting in 2009, at which point she stopped wearing that costume (Occasional out-of-continuity appearances of it in comics like DCeased: Unkillables aside.) Cassandra has been operating under the name "Orphan", and wearing a different costume, since 2016. She does still appear in comics, though, having been part of the ensemble team featured in Detective Comics from 2016-2018 from and then in the most recent volume of Batman and The Outsiders from 2019-2020 (and in the 2020 out-of-continuity original graphic novel Shadow of The Batgirl she got to go by that name again).
Some of these other characters, though? They're not appearing anywhere, wearing any costumes or under any names. Let's go around the cover clock-wise. There's Green Lantern Tai Pham from the 2020  out-of-continuity original graphic novel Green Lantern: Legacy.  There's Super-Man Kong Kenana from 2016-2018's New Super-Man and 2018's New Super-Man & The Justice League of China.  There's a female Red Arrow from the pages of Teen Titans and, I assume, some of the post-Flashpoint Green Arrow comics (none of which I've read; sorry). Just behind her is some character I couldn't even guess at (again, sorry). There's The Atom Ryan Choi from 2006-2008 series The All-New Atom (he was also a member of the short-lived 2017-2018 volume of Justice League of America). There's Katana, a perennial team comics character most recently seen in Batman and The Outsiders. There's the villain Cheshire, most recently seen in Batman arc "Their Dark Designs." There's Grunge—fucking Grunge!—from Gen-13; I honestly have no idea the last time DC published a Gen-13 comic. And who could forget OMAC Kevin Koh, aside from me, as I completely forgot that the character even existed, but he was apparently the star of the eight -issue New 52 OMAC from 2011. And I guess he was Asian, so there's that!
So yeah, the cover doesn't look so hot. As for the interiors, the solicitation promises stories featuring The Atom, Cassandra Cain, Damian Wayne, Dana Tan from Batman Beyond, Green Lantern Tai Pham, Katana, Lady Shiva, the New Super-Man, Red Arrow and more. The creators include Gene Luen Yang, Greg Pak, Dustin Nguyen and, most exciting to me, Trung Le Nguyen, the creator responsible for The Magic Fish, one of the best graphic novels I read in 2020.
DC really needs to do better when it comes to representation in their comics. I have plenty of suggestions but, um, I don't work there. Here's some super-easy, immediate ones, though.
I think making Cassandra Batgirl again, even if it's just a Batgirl, and making use of Super-Man in the Super- books or Young Justice/Teen Titans adventures would be a good start. So too would creating new heroes; if you've got the likes of Gene Luen Yang on your payroll, then you've certainly got the talent to create new, compelling superhero characters. I mean, just look what he did with The Green Turtle in Shadow Hero; I imagine he could reinvent some of the heroes of Asian descent laying around the character catalog like, I don't know, Dr. Light, Striker Z, Tsunami, Nightblade, Judomaster, Wing, Deep Blue or others in compelling ways.
Heck, seeing what Trung Le Nguyen did with a handful of fairy tales in The Magic Fish, I think it would be well worth asking him if he saw any potential in any of DC's un-used characters of Asian descent too... 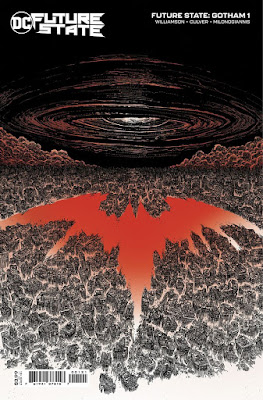 It's not at all surprising that, if DC was going to continue publishing an ongoing series set in their Future State setting, it would be this one: Future State: Gotham #1. Joshua Williamson and Dennis Culver are writing and Giannis Milonogiannis is drawing it. The insanely detailed cover comes courtesy of the great James Stokoe, who I am quite happy to see is spending more time in Gotham City. 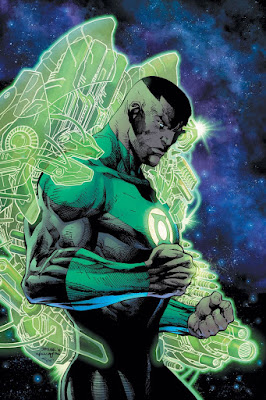 Well, this is kind of cool. Green Lantern: John Stewart—A Celebration of 50 Years gives the third Green Lantern his very own hardcover "Celebration" collection, rather that simply relegating him to a chapter or so in the previous Green Lantern "Celebration" hardcover, which had Hal Jordan on the front and collected comics starring all of the Lanterns.
I usually just skim these volumes to see what the editors chose to include, as I've usually read all of the contents, but this is one I might actually read cover to cover, as I've read relatively few of John's historic appearances, not really encountering him regularly until he started appearing as a supporting character in Green Lantern during Kyle Rayner's turn as the title character, after which point he got his own ring and began appearing in the pages of Justice League and Green Lantern comics pretty frequently. 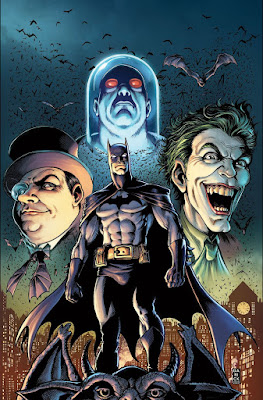 Darick Robertson does the honors of reviving the Batman anthology series with Legends of the Dark Knight #1, the first chapter of a three-issue arc featuring The Joker, Mister Freeze and The Penguin, the latter of whom Robertson does a particularly fine rendition of, as you can see from the cover (He also draws a good gargoyle).
The solicit mentions a half-dozen or so other upcoming creators. I've got my fingers crossed that we'll get to see arcs from James Stokoe, Elsa Charretier, Kyle Hotz, Ramon Villalobos, Corey S. Lewis,  Tom Scioli, Kelley Jones, Guillem March, Sophie Campbell, Jerry Ordway, Rick Burchett, Matt Wagner, Trung Le Nguyen and Jill Thompson, but hey, that's just me. 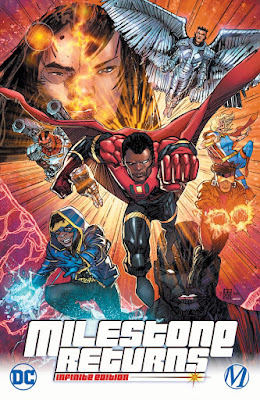 Hmm, I'm not so sure about Icon's new costume—that is Icon front and center, right?—but Milestone Returns: Infinite Edition #0 will feature art by Denys Cowan and Bill Sienkiewicz, so that's definitely going to be worth a look. 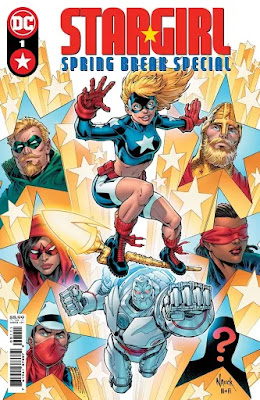 The cover for Stargirl Spring Break Special #1 by Geoff Johns and Todd Nauck appears to tease a new, eight-person line-up for the Seven Soldiers of Victory, a line-up that's constantly shifting thanks to DC's constant continuity rejiggerings. Now it looks like Green Arrow is back, and with a Red Arrow instead of Speedy Roy Harper.
I'm somewhat confused by this book's existence, as I'm still not sure if DC has its Golden Age back yet or not—Flash Jay Garrick appears in this month's issue of The Flash, and Alan Scott was on the cover of Infinite Frontier, suggesting probably and maybe some Golden Agers are still around in the present DCU—nor am I entirely sure why there's a Stargirl comic being published now, instead of in conjunction with the debut of her TV show, which was some time ago. 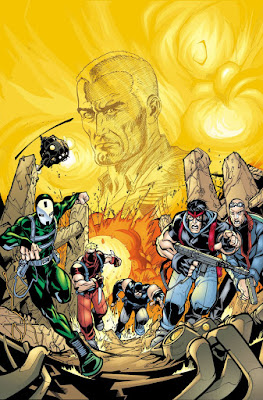 Suicide Squad: Casualties of War collects the entire 12-issue revival from 2001, written by Keith Giffen and drawn mostly by Paco Medina. I only read the first issue, and found it rather wanting, but I did find myself wanting to revisit the series around the time the film had come out, and at that point I only had my copy of the first issue and a handful I found in back-issue bins. I'm definitely keen to read this, although I'm not sure it's a book I need to own, so I might look for it at the library if I remember to in the spring. 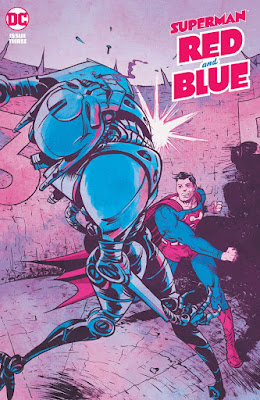 Superman: Red & Blue #3 will include contributions from both James Stokoe and Michel Fiffe, among others, so you're not going to want to miss that. 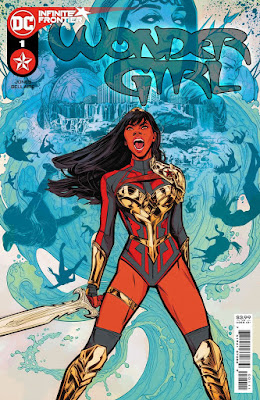 Uh-oh. The fact that Future State's Wonder Woman Yara Flor will be starring in a book called Wonder Girl #1  by Joelle Jones doesn't bode well for the future of Wonder Girl Cassie Sandsmark, last seen in the pages of the just-cancelled Young Justice. Not that there can't be more than one person using the same name at the same time, of course, but it does seem to indicate a lack of worry on DC's part about confusing would-be readers, meaning I don't think we'll be seeing a whole lot of Cassie any time soon.
I could be wrong, though. She could be guest-starring in the second issue of this series, for all I know. It does seem odd that they are calling Future State's Batman "The Next Batman, "while it's Wonder Woman is going to be going by Wonder Girl, though...
Posted by Caleb at 9:48 AM