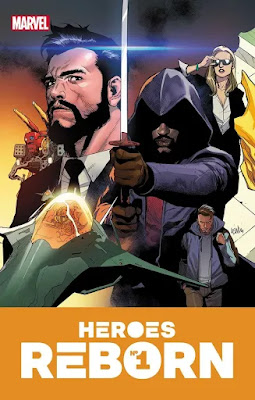 Marvel's May plans are dominated by a new iteration of Heroes Reborn, a small-ish event series seemingly spinning out of Jason Aaron's Avengers in which the latest version of The Squadron Supreme are the only heroes on Earth, and the likes of Tony Stark and Carol Danvers never became Iron Man and Captain Marvel. Blade is the only one who remembers the way things are "supposed" to be, and one imagines it will be up to him to reawaken the Avengers, who will then be "reborn." Occasional Avengers artist Ed McGuinness will be joining Aaron for the first issue, a 56-page $5.99 affair, but that's hardly all there is to the event. The next three issues of the series will also see publication in May, as will one-shots Heroes Reborn: Magneto & The Mutant Force #1, Heroes Reborn: Young Squadron #1, Heroes Reborn: Siege Society #1, Heroes Reborn: Hyperion & The Imperial Guard #1, and Heroes Reborn: Peter Parker, The Amazing Shutterbug #1. After Heroes Reborn #1, all of the tie-ins are $5 a pop, so this looks to be a pretty pricey event for those who read these things serially. 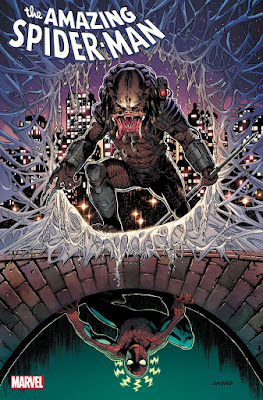 My initial reaction to artist Cory Smith's Predator variant cover for Amazing Spider-Man #65 was that it's probably not that fair a fight, as Spidey's various super-powers should make him more than a match for the alien hunter. But then I remembered all the trouble Kraven The Hunter has caused Spidey over the years, and that guy's just a normal human with amazing fashion sense, and lacks super-camouflage abilities and a shoulder-mounted laser cannon, so maybe the Predator would give Spider-Man a run for his money after all.
I'm seriously excited to read any and all Predator hunts various Marvel characters comics, whenever Marvel gets around to publishing any, but then, I'd read just about any Predator crossover. 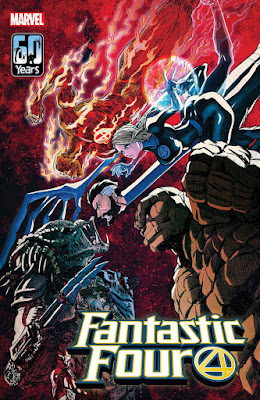 Okay, but Superlog's variant cover for Fantastic Four #32 is in no way a fair fight. At the very least, there should be four Predators, or maybe a Super-Predator with the powers of all four members of the FF... 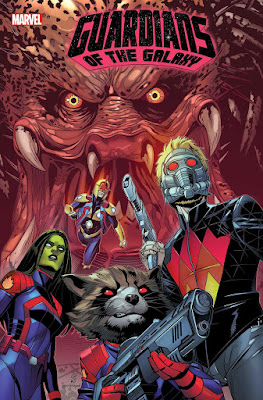 Now a Guardians of The Galaxy vs. Predator match-up, like the one suggested on Chris Sprouse's variant cover of Guardians of The Galaxy #14 is more like it. Sure, Gamora and Nova could smack a single Predator around pretty good, but the Guardians are a space-based team, so it's easy to imagine them stumbling onto a game reserve planet like the one from the film Predators, and facing various traps and being stalked by a team of Predators. 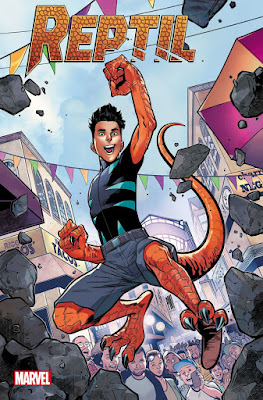 Reptil #1 sees the return of Avengers: The Initiative's dinosaur-powered young hero, courtesy of writer Terry Blas and artist Enid Balam. I always liked that character, even if I wasn't crazy about the name. As to why there's a four-issue Reptil miniseries all of a sudden, it seems to be tying into the events of Champions, wherein young heroes are now outlawed in the Marvel Universe. 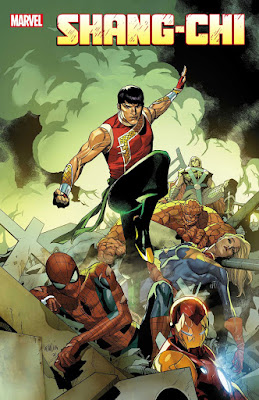 Gene Luen Yang and Dike Ruan's Shang-Chi miniseries must have proved a success, because May will bring Shang-Chi #1, which looks like it will be the start of a new ongoing series. The solicitation copy alludes to the hero "using an evil secret organization as a force of good," which sounds an awful lot like the premise of Agents of Atlas, but I suppose we'll see.
Has anyone read any of Yang and company's mini-series yet? If so, how is it? 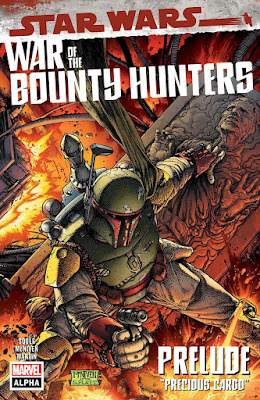 Star Wars: War of The Bounty Hunters Alpha #1 kicks off a Star Wars crossover event, in which Boba Fett has Han Solo in carbonite, ready to transport to Jabba the Hutt on Tatooine: "Sounds easy. What could go wrong?" That's...a pretty good idea for a Star Wars comic. In the movies, it seems like Boba Fett made it from Cloud City to Jabba's Palace more or less immediately, with the heroes arriving hot on his trail, a matter of days later—weeks, tops.
But in the comics, like the original Marvel comics, it seemed to take for-fucking-ever, with Luke, Leia, Chewbacca and company scouring the galaxy for Boba Fett and never really finding him, for issues after issue after issue. It was as if he was walking Han to Jabba.
This was, of course, because the comics had to kill time until the next movie came out, but re-reading the comics after having seen Return of The Jedi—as I did—the wheel-spinning seems particularly obvious. Maybe it is in the new comics set between Empire and Jedi' too, I don't know; I fell behind on the earlier volume of Star Wars and just never caught back up.
Anyway, things going wrong to complicate Boba Fett's errand seems like a pretty inspired idea to me.
Posted by Caleb at 6:30 AM

Aw, man: Boba Fett's trip to Tatooine was the B-plot to Dark Horse's Shadows of the Empire comic, and pretty great! For narrative purposes, Fett talks a lot to the frozen Han, calling him "a work of art: 'Man in Carbonite' by Darth Vader!" As the other bounty hunters repeatedly try to poach him, Fett is getting increasingly aggravated, finally furious that it's come down to a suicide run, that Solo would probably survive if something happened.