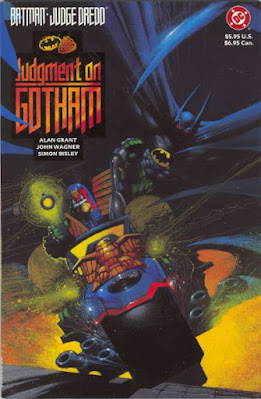 Alan Grant has died. He was my first favorite comics writer, having been one of the first comics writers whose work I read and enjoyed—on 1991's Batman/Judge Dredd: Judgement on Gotham, which he co-wrote with John Wagner, and on the Norm Breyfogle-drawn issues of Detective Comics I started pulling from back-issue bins when I first got into comics. In fact, for the longest time, Grant seemed to write all of my favorite Batman comics.
Perhaps owing to his relative unfamiliarity with the character at the start of his association with him, perhaps owing to his background in British comics, Grant's Batman differed sharply from the versions of the character that writers before and after him produced.

Grant's Batman stories tended to be very plot-heavy and their character work to focus on defining the character in broad strokes or symbolically, rather than on interpersonal melodrama, of which there tended to be very little. Rather than the ongoing soap opera that many superhero comics had become by the late 1980s/early 1990s, Grant's Batman comics were more often than not standalone affairs, chronicling distinct, discrete adventures with their own beginnings, middle and ends, and all were remarkably new-reader friendly.
Grant's Batman was a sort of independent, freelance policeman who would swing around Gotham City finding trouble, usually in the form of muggers and drug dealers, the scourge of drugs being something of an obsession of Grant's Batman. While Grant would go on to write pretty much every villain in Batman's expansive and colorful rogue's gallery, he more often than not created his own unique villains, many of which "felt" like classic Batman rogues, having some sort of outward visual component that mirrored an inner psychosis. Some of them caught on, many of them didn't.
Grant's Batman writing included stints on Detective Comics (1988-1992) and Batman (1990-1992), followed by his own title created especially for him, Shadow of The Bat (1992-1997), which he wrote for 82 issues. He began his career as a Batman writer co-writing with John Wagner, and he was most often teamed with pencil artist Norm Breyfogle. Indeed, Breyfogle was his partner on Shadow of The Bat as well for the first few issues (the first arc has been collected as The Last Arkham), before departing, after which point Grant worked with such artists as Vince Giarrano, Bret Blevins and Tim Sale.
During his run on the character, Grant co-created the villains Mr. Zsasz, Jeremiah Arkham, Scarface and The Ventriloquist and Anarky, the last of whom graduated to his own short-lived solo series for a time. Granted scripted portions of several big storylines, including "Knightfall," "Knightquest", "Legacy," and "Catacylsm."
The other DC character Grant is most associated with is Roger Slifer and Keith Giffen's character Lobo, a perfect fit for Grant's sensibilities and ability to write on multiple levels at once, making Lobo into a comedic character. The approach helped popularize the character, whom Grant wrote repeatedly in collaboration with Giffen. In addition to many miniseries and one-shots—Lobo: The Last Czarnian, Lobo's Back, Lobo Paramilitary Christmas Special, etc—Grant wrote a Lobo ongoing series fhat lasted or 65 issues.
In addition to the Batman and Lobo work he's best known for, Grant also wrote 41 issues of L.E.G.I.O.N.  and he wrote the first 39 issues of  The Demon (1990-1993). He also co-wrote two more Batman/Judge Dredd crossovers, 1995's The Ultimate Riddle and 1998's Die Laughing and The Batman/Spawn crossover, War Devil (a re-release of which is expected soon). He also wrote Superman/Terminator: Death To The Future and Batman/Daredevil: The King of New York.
That may seem like an awful lot of comics, but it's just what he did for DC Comics, and represents just a very small fraction of his work.. This is the stuff I had access to as an American reader. Grant is an even bigger name in British comics, thanks to his work in 2000 AD, stretching back all the way to 1979. There he wrote many Judge Dredd stories, as well as Judge Anderson, Tharg's Future Shocks, Mazeworld, Ace Trucking Company and much, much more.
While DC hasn't really organized any collection efforts around Grant personally, it's not hard to find some of his best work.
The two volumes of Legends of The Dark Knight: Norm Breyfogle and the collections of The Caped Crusader and Dark Knight Detective include some of Grant's best Batman work. Four volumes of Shadow of The Bat have also been collected and may still be findable on Amazon or at your local library and there are two volumes of Lobo By Keith Giffen and Alan Grant. Some of his Dredd and Anderson work has also been made available in trade in the U.S. as well.
If I were to recommend a place to start, it would be with his Breyfogle collaborations for his Batman, the Lobo collection for his humorous, parodic writing, and maybe the Batman/Judge Dredd Collection,  which shows two of the characters he's most associated with, and two of the modes he worked in, essentially crashing into one another.
Posted by Caleb at 1:36 PM

Nice retrospective. He was my first favorite writer as well, in college as I figured out how to follow writers instead of characters.

Gotta go revisit some of these, thanx for the list.
RIP.