A Month of Wednesdays: December 2022 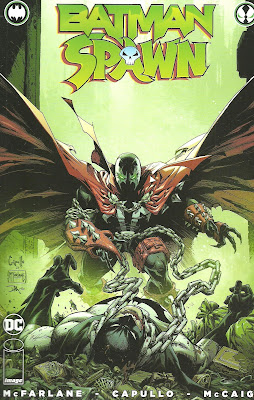 Batman/Spawn #1 (DC Comics/Image Comics) I can tell you about every Spawn comic I've ever read. It won't take long.
I was just getting into comics around the time of Image's founding and the hype that accompanied it, and of all the offerings, Todd McFarlane's Spawn is the one that I found most appealing, as I saw some similarities between McFarlane's art and that of my favorite artist, Norm Breyfogle. I liked the character design, with the big billowing cape, the chains and the glowing triangle eyes, I liked the supernaturally-powered Batman vibe of the character, and I liked the vibrant coloring of the art. I read the first five issues before deciding as well-drawn as it was, it wasn't very good. I was 15.
I came back for issues #8-#11, the run written by Alan Moore, Neil Gaiman, Dave Sim and Frank Miller, but those were the last Spawn issues I read, not counting the pair of 1994  Batman team-ups, the DC-published War Devil, written by all of the Batman writers at the the time, Doug Moench, Chuck Dixon and Alan Grant and drawn by Klaus Janson, and the Image-published Spawn/Batman, written by Miller and drawn by McFarlane himself.
So it's not as if I don't know the first thing about the character. I just don't know much more than the first thing about him.
I gather that at some point McFarlane quit drawing Spawn, and an artist named Greg Capullo took that job, an artist who became the big breakout star of DC's 2011 New 52 initiative, when he was paired with writer Scott Snyder on the Batman monthly.
That seemed to be the selling point of the 2022 Batman/Spawn crossover, the chance to see Capullo draw the two characters he was now most associated with, one of them something of a return for him. This time, McFarlane would be inking Capullo's work, and writing the crossover for himself.
This turned out to be...well, it's not exactly the best division of labor. Considering all the comics writers there are in the world—a solid dozen or so of whom write Batman comics in any given month—having someone who's still something more of a dabbler than a polished professional seemed a mistake.
I will try to explain the plot, as well as I am able.
Spawn Al Simmons narrates that there is a void souls briefly enter when a person dies that he could unlock to rescue someone, his wife, but that the power to unlock that void lies with "The Black Beast," Batman. Among the pearls that Batman's mom wore on the night she died—yes, the goddam tired old pearls—one was a machine or some kind of magic which allowed for the opening of different dimensions....? Or something....? The Court of Owls wanted it, which is why they had the Waynes killed.
They (or should I say "They," as Spawn mentions a Court of Priests in his world rather than a Court of Owls)  recruited Spawn, who, it is said,  comes from a different dimension. which may or may not be Batman's future (They killed Superman first in Spawn's world, he says at one point, because they weren't afraid of him?), telling him that Batman has his wife Wanda's soul.
Spawn goes to beat Batman up, getting to the fight-then-team-up part of the traditional superhero team-up formula. Spawn is winning the fight quite handily thanks to his powers (see the version of the cover with a triumphant Spawn standing over a prone Batman, like the one above), but then he enters a "dead zone" where his cape turns floppy and he lacks his powers, and Batman is able to wipe the alley floor with him (now see the cover where Batman stands triumphant over the prone Spawn). 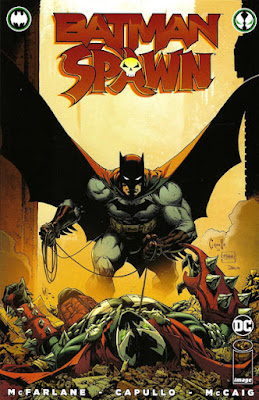 Batman figures out that they are being manipulated, so they have a meeting in the Batcave, and then go out to brutalize possible informants and pose for a two-page spread on a rooftop, which McFarlane and Capullo use as the backdrop for a conversation, which seems more Image-y than another page of talking heads, I guess.
Then they talk to the Joker, who here is wearing his own flayed-off face as a mask, as he did for a time in the New 52. When they leave his cell, we see him gathering around him a bunch of little Violator vclowns.
Then the Court of Owls sends a Talon assassin after Batman and Spawn. They seem to be fighting over Batman's ability to open a portal—with a pearl, maybe?—which he can only do because he has a soul. Batman does some planning, which pays off. Spawn tricks onlookers at the Arkham Asylum setting into thinking Batman is willing to kill now. And that's it? I guess?

I dunno. I really miss the era of blogs now, because I could really use someone to explain what the heck happened in this, easily the worst of the three Batman/Spawn crossovers. It is not, unfortunately, the last, either, as the scene with the Joker and Violator hinted; indeed, the last panels show someone with the Violator's make-up saying "Everything is working exactly as planned. And now the next move is mine."
It's nothing if not a threat for a sequel. I would hope that the next time around McFarlante gets a co-writer to make sure everything makes a bit more sense than it did this time around—I don't know what was done by the editors on this book to make sure that this was the case, but it sure felt like an old-school, auteur Image book without an editorial infrastructure. Another good idea? Writing the book as if someone reading it didn't know who Spawn was or what his deal was. Of the two participants, he's definitely the less well-known of the two, and McFarlante seems to have missed an opportunity to introduce him to legions of Batman fans who are reading this for the Batman side of the equation (and or Capullo's presence).
As for the artwork, it's fine. I like Capullo well enough, but he was never one of my favorite Batman artists (Now if Guillem March were drawing this...!), but then, that's the whole point of the endeavor, isn't it? The former Batman and Spawn artist drawing Batman and Spawn at the same time? I might have preferred March or John McCrea or Kyle Hotz or—especially—Kelley Jones, but that's just me, and having anyone but Capullo draw this particular comic would have erased its whole reason for being.
Maybe that promised next one will involve different artists as well as a different writing team. That would be my hope, anyway; the fun thing about such crossovers is seeing creators handle different characters than they usually do, and I'd love to see some more diverse Batman artists draw the Spawn character. In the mean time, I guess there are something like a million variant covers from all-star artists like Jim Lee and J. Scott Campbell o content myself with (even if there is no Kelley Jones image among them). 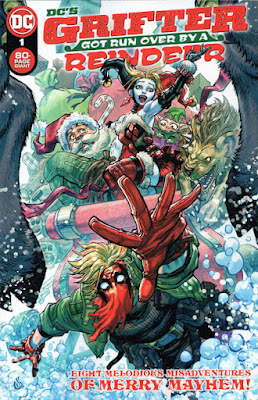 DC's Grifter Got Run Over by a Reindeer (DC) The theme for this year's holiday 80-page-giant is Christmas carols, as the the title somewhat alludes to, and the results are mixed, but mostly middling. Maybe it's the fault of the theme. The strongest of the bunch is a Batman and Catwoman story penned by writer Scott Bryan Wilson and drawn by Skylar Partridge, in which Catwoman gets Batman that which he likes best for Christmas, and he pulls out a bit of trivia about the "Twelve Nights of Christmas" song that only The World's Greatest Detective in a story would know. The weakest is the Max Bemis-written, Pablo M. Colllar-drawn story inspired by "Silent Night", in which Bemis has Constantine narrate like he's in a prose story rather than a comic book one.
The rest mostly fall in the middle, with little in any of them worth note (I devoted a tweet to each story in this thread, if you'd like more on this book than I'm giving it here). I liked David Lapham's art in a weird Superman/Wonder Woman story, but this is, overall, one of the weaker 80-page-giant anthologies I've seen from the publisher in quite a while. Grifter, by the way, only gets run over by a reindeer on the cover. The Grifter story is actually inspired by "The Grinch Who Stole Christmas," and it's mainly nonsensical, although it features Dustin Nguyen's art and ends with Grifter getting run over by a Gen 13-piloted snowmobile. 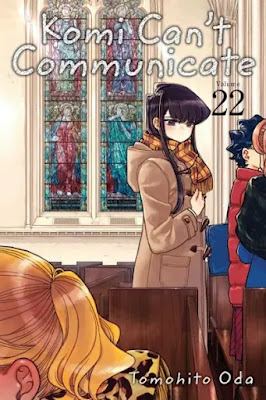 Komi Can't Communicate Vol. 22 (Viz Media) Still on their class trip to New York City, Manbagi decides to increase the drama a thousand-fold by confessing her feelings to Tadano. She doesn't quite get there, but does tell him she likes someone who's a lot like him...and then decides to try again when they're back in Japan, leading to a rathe suspenseful cliffhanger in this volume. Meanwhile, Komi's little brother Shosuke has his class trip, which is also dominated by a Tadano, as much as he would prefer it wasn't. 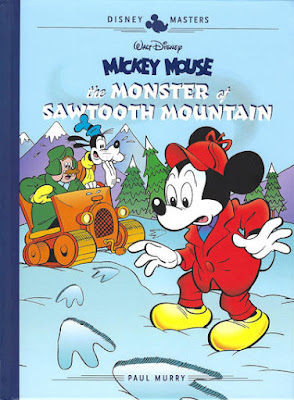 Mickey Mouse: The Monster of Sawtooth Mountain (Fantagraphics) Another Disney Masters edition focused on the work of the great Paul Murry, collecting nine stories from 1959 to 1961. 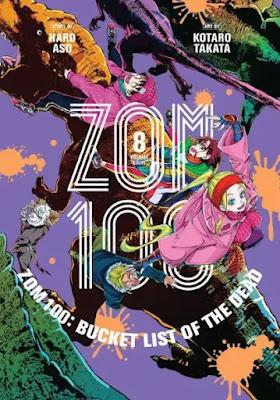 Zom 100: Bucket List of the Dead Vol. 8 (Viz) Zombies running through a natural history museum become entangled in dinosaur fossils, seemingly bringing about the threat of zombie dinosaurs near the climax of the eighth volume of this fun series. This includes so many zombies becoming intertwined with a complete Spinosaurus skeleton that they somehow bring it to un-life, animating it to hunt our heroes. As unlikely a turn of events as that is, it does lead to a scene of dinosaur versus dinosaur conflict, as Akira and the gang fight it using an animatronic Tyrannosaur, souped-up for battle by their robot butler, a holdover from the all-A.I. luxury hotel they stayed at in a previous volume.
That early climax is followed by a story in which Akira tires of the bucket list concept, which is, of course, the very premise of the series. Just as he's questioning the list, he gets trapped all alone in a newsstand by a horde of zombies, with nothing to do but argue with the philosophers who seem to appear to him about the nature of boredom, the human need for entertainment and the very meaning of life.
It's surprisingly powerful stuff, and another example of why Zom 100 is the perfect comic for our pandemic era.
Posted by Caleb at 4:44 PM