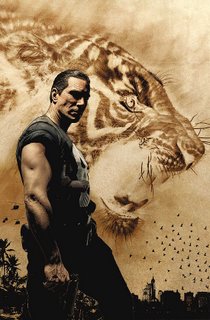 52 #4 (DC Comics) It’s week four of DC’s insanely ambitious weekly series, and we finally find out what happened to at least some of Donna Troy’s space team—and it ain’t pretty. Meanwhile, more drunken noir starring Montoya and the Question, queer developments in the life of Steel, Booster Gold and Fire have a disagreement, and Ralph Dibney finds someone who’s taking the loss of a loved one much, much harder than he is.

Action Comics #839 (DC) In case you haven’t heard somebody’s got a movie coming out at the end of the month, and this issue reflects it, with Superman’s comics costume more closely resembling his movie costume, and a scene seen in the previews occurring in downtown Metropolis. Writers Kurt Busiek and Geoff Johns continue to do a fantastic job of making Superman comics ready for their close-up, and the pair pens one of the most beautiful and moving interior monologues ever put in the Man of Steel’s mouth.

Chronicles of Wormwood 99-cent Preview (Avatar Comics) Okay, I was a sap to blow 99 cents on eight random pages from Garth Ennis and Jacen Burrows’ upcoming book about the anti-Christ, his talking rabbit roommate and his friend Jesus, but I’m still looking forward to the Chronicles of Wormwood #1. Based on Preacher and The Pilgrim, you really can’t go wrong when Ennis writes about religion.

Crisis Aftermath: The Spectre #1 (DC) Three things I don’t like about this series already. 1) John Ostrander and Tom Mandrake already told the hell out of the Spectre story, and it can’t be improved upon…let’s all just move on, huh? 2) This is yet another example of a black superhero simply filling the shoes of a white superhero, and while it’s admirable that DC is trying to diversify their line-up, why do black heroes always have to merely sub for white ones, instead of having their own identities? 3) That goatee . What the hell, is this the evil Spectre from another dimension or something? For a much cooler Spectre redesign, check out Dean Trippe’s over at Project Rooftop.

The Five Fists of Science (Image Comics) It’s the heroic Mark Twain and Nikolai Tesla vs. a cabal including Thomas Edison, Guglielmo Marconi, J.P. Morgan and Andrew Carnegie in this crazy-ass work of historical fiction from Matt Fraction and Steven Sanders. Probably the greatest story ever written about Twain and Tesla’s battle against Edison’s cabal.

JLA: Classified #21 (DC)Red-hot writer Gail Simone’s turn at the steering wheel of this title has been a bit of a snooze overall, but it has had some great character moments sprinkled throughout, and there’s another during this over-long arc’s denouement. Worth picking up just to see artist Jose Luis Garcia-Lopez’s designs of Martian Manhunter and Green Lantern’s formal wear, though.

The Punisher: The Tyger #1 (Marvel Comics/Max) Garth Ennis took over The Punisher shortly after Joe Quesada’s ascension to the EiC office (and the creative Rennasaice that occurred then), and Ennis is still at it. His best work on the character has been outside the main title, though—Born, The End, The Cell—and this may just be the best of the best. Along with artist John Severin, Ennis goes way, way back to Frank Castle’s boyhood, to tell the story of how he met his own personal spirit animal—not merely a tiger with an “i,” but with a “y” as in William Blake’s poem. Good, hard, slightly scary pulp fiction.

Runaways #16 (Marvel) This month’s issue of Runaways was every bit as awesome as all of the previous ones, the only difference being that the newest cover artist Marcos Martin, contributes his best cover yet.

Superman/Batman #26 (DC) An incredible amount of talent lines up to tell a pretty straightforward story of Superboy and Robin teaming-up to take on the new Toyman in a special issue plotted by Jeph Loeb’s late son Sam Loeb (dialogue is provided by some of the best in the business, like Joss Whedon, Brian K. Vaughn and Geoff Johns), and nearly every page is done by a different dynamic, superstar artist. It’s the very definition of a must-have comic book. Jeph Loeb’s tenure over the last 25 issues has been hit or miss (quite often miss) but his short back up story, about a young Clark Kent’s boyhood friend Sam dying of cancer, is probably his biggest hit in a long time.

Showcase Presents: The Haunted Tank Vol. 1 (DC) One of the more bizarre features in DC’s long history—the tale of Confederate General J.E. B. Stuart haunting a tank containing his namesake Sgt. Jeb Stuart in an effort to protect him and his tank crew during World War II—gets collected into a nice, fat, 560 page book. As if that mad set-up wasn’t enough to sell the book, it also features gorgeous black and white art from war comics masters Joe Kubert and Russ Heath.

Ultimate Extinction #5 (Marvel) Writer Warren Ellis makes his disdain for comic book superheroes known by doing a half-assed job re-writing one of the most momentous and apocalyptic stories in Marvel history: The story of Galactus. While Ellis gets points for reimagining G. as a more realistic threat and for taking his version in a very different direction than Stan Lee and Jack Kirby’s original Galactus story, this final confrontation sort of fizzles. Blame it on the build-up, which saw two prequel miniseries of foreshadowing leading to this series. There was nothing wrong with any of the stories leading up to this climax, but Ellis’ proportions were way off—with that much build-up, we needed a much bigger blow-up then we get in this climax. Still, how about those Silver Surfers, huh?

Ultimate Spider-Man #95 (Marvel) Brian Michael Bendis’ last story-arc, in which Spider-Man joins the X-Men for a fight against Deadpool, was one of the weaker ones in this excellent series, but Bendis brings back his A-game for this story. Ultimate Blade! Vampires! Ultimate Morbius! And potent teen melodrama! Mark Bagley demonstrates his versatility beautifully, drawing an argument with MJ and a fight with a shape-changing monster equally well.
Posted by Caleb at 7:38 PM

This site is one of the best I have ever seen, wish I had one like this.
»

I love your website. It has a lot of great pictures and is very informative.
»

I find some information here.