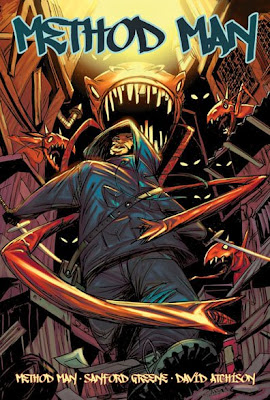 I suppose there are two ways to look at Method Man’s exra-hip hop career as an actor, comic book character and professional brand name.

I take the more generous view, in part because I understand the desire to make things you like, whether you’re necessarily good at them or not, just for the fun of it. God knows if I had a comparable amount of cachet, I’d be doing the exact same thing (Well, I might make a musical romantic comedy rather than a stoner flick, but you know what I mean).

Which brings us to new-ish graphic novel Method Man (Grand Central Publishing), which features a “concept by” top-billed creator Method Man, and stars a character who looks an awful lot like Method Man (who likes to smoke pot like, you know, most Method Man analogues).

Method Man is renowned as a huge comic book fan, and so it’s no surprise that he created or co-created (or just stamped his name and likeness on) a Method Man graphic novel, because really, what comic book fan wouldn’t want a comic book named after themselves, starring a version of themselves?

He’s got an ace artist working with him too: Sanford Greene, whose style seems equally informed by manga and hip hop art, pretty much the perfect artist for a project like this. David Atchison gets the third credit down; “script.” Atchison is attached to the similarly ambiguous celebrity-fueled comics project Occult Task Force.

So, how is it? Let’s ask one of the random demon characters that bedevils our protagonist:

Yes. “Meh” just about sums it up. (You did say “meh,” right random demon character? I wouldn’t tell if all those e’s were long or short e sounds.) But not just a plain old “meh,” a long, drawn-out “meh,” one that ends with an exclamation point.

See, this is a kind of fun, kind of terrible graphic novel that amounts to absolutely nothing at all, and I still kind of dug it, for a couple of reasons.

The story, such as it is, consists of the extremely common premise of a private investigator dealing with paranormal stuff. It’s given a Biblical gloss—Lilith, Cain, Tower of Babel, leviathan, Spear of Destiny, ark of the covenant, Mount Ararat—but even these bits and pieces are present in dozens of other comics (For example, within the last month or so, I’ve read The Lost Book of Eve, Chrono Crusade and Final Crisis: Revelations, all of which use some of ‘em).

A prose page one prologue tells us all about P.I. Peerless Poe, a direct descendent of Cain. He bears the mark of Cain, which attracts supernatural phenomena, and the power of “the wrath of Cain,” a sort of berserker rage. He trained with The Order of the Sacred Method, a group of warrior monks who protect earth from Biblical monsters to atone for Cain’s sin, but he’s since dropped out, turning to booze, pot and paychecks.

The story opens with Poe prowling through a sewer with a shotgun and flashlight, looking for a neighborhood kid who was reportedly abducted by a giant red alligator. His narration quickly recaps just about every bit of information in the prologue, so the story is repetitive and redundant by the time it actually begins. Instead of a kid or an alligator, he finds a dragon-like monster, and an old man from his old Order, who hires him to help save the world.

That begins a brisk—a little too brisk—eighty-six page race from the nameless city to Stonehenge to Mount Ararat to the Chapel Perilous to the Tower of Babel, picking up two more companions and the Spear of Desinty before going to battle against Lilith and handily winning. A war millennia in the making knocked out in the space of an afternoon.

The pacing is disconcertingly off, as if 140-page story got chopped down and squeezed into a too small space, so little occurs beyond exposition and plot advancement. (It also feels like a pitch for an ongoing series; like something Greene and company might have put together to give to a publisher and try to sell them on a monthly Method Man or a series of graphic novels).

None of the characters get a chance to crystallize, or even justify their existence. Any one of them would have been sufficient to drive the plot; the others appear and disappear with no real consequence, which is especially weird given the way one of them leaves the story. (What is played as a dramatic moment just seems silly.)

For example, here’s the entirety of the heroes’ infiltration of the Tower of Babel, a four-phase plan: 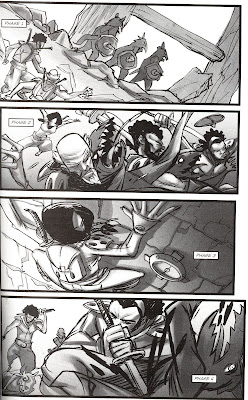 That didn’t take long, did it?

The other odd thing about the book is the way swearing is handled. I talked about comic book swearing in a post about Secret Invasion recently, how there’s a tension between a writer’s desire to use swear words in their stories and a publisher and/or writer’s desire to pseudo-censor their swear words; a sort of implied, “Hey, we’re grown up and authentic, but not that grown up and authentic!”

Method Man eschews the Brian Michael Bendis method of using “@#$%” to stand in for four letter words (As in “@#$% you, you @#$%ing @#$%!”), using a method that’s even more transparent. When Peerless swears, in narration or dialogue, we get the first and last letters of the word, with hangman-like spaces between.

Damn and hell are cool, as is talking about drinking, drugs and “getting dome.”

It all seems pretty arbitrary, and extremely goofy, particularly since there’s so much of this fake-ass swearing throughout the comic. If you can’t say “shit!” in your comic, why not just say “crap!” or “oh no!” or nothing at all? This way of handling it clearly communicates what the swear word is, as well as the fact that the writer and /or publisher are afraid to use the word.

And why can’t Method Man say “shit,” anyway? This isn’t like Bendis’ Marvel work, where kids character Spider-Man can’t be seen hanging around folks dropping F-bombs. This is a $14 graphic novel created by and kinda sorta starring a rap artist no one younger than 13 should even know exists.

Yet for all these weaknesses, I didn’t exactly hate this book either. I liked spending time with a comic book hero who spoke in something of a hip hop vernacular (even if they get all goofy with the half-edited swear words). Bendis can’t really get away with a lot of dialogue he tries to write for Luke Cage, for example, or Chuck Dixon with the words he tried putting in Thunder’s mouth during his short Batman and the Outsiders. It always seems painfully awkward—an old white guy trying to write young and black. Atchison and Method Man don’t have that problem; how much more authentic can a hip hop hero be than one who is an actual hip hop hero?

I liked some of the sillier scenes too, like Poe and two of his allies hiding in the corpses of demons, which they wore like mascot suits, their faces sticking out of the dead creatures’ mouths.

And Greene’s art is, as always, a treat. There’s just so much energy in his lines and the shapes he chooses; Greene just whips your eyes all around his pages, presented here in black and white, with tones by Kelsey Shannon.

Here’s the third page, in which Poe stumbles upon a monster, and makes a break for it: 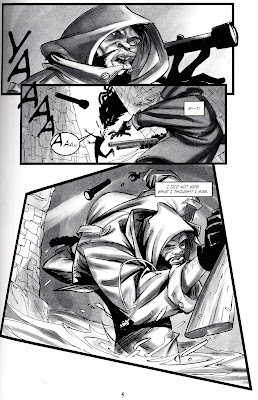 Greene’s character designs are pretty cool, too. Aside from the Method Man character, Greene designs three other members of the Order, a young girl, another young man, and an old man, plus a ton of monsters including a leviathan, a behemoth, Goliath and Barabus.

Hey, don't forget Method Man's excellent turn as "Cheese" in The Wire. He was awesome in that.

That said, I don't think I'll be giving this graphic novel a read, unless I see it in Barnes & Noble and read it there.

Read it at some bookstore chain, myself. I'd have to agree. I really couldn't hate it, once you got past the first few pages. I have a thing about people trying to write themselves as some sort of action star/hero that bugged me until they moved into the more fantasy elements of the story.

I, too, liked Sanford's art. David Atchison did a solid job scripting the book. I think he could have done a much better job with the material if he was given room to let the characters and stories breathe.

Seems to me that the company just wanted something that had an impulse purchase price...which probably doesn't work too well when your book winds up the size of a pamphlet and gets easily lost in the graphic novel section.

One of my coworkers told me a story about this comic.
One day he was doing something and a customer said "Hey, you see this wonder girl comic?" (which was coming out at the time and drawn by Sanford greene) "I'm getting the artist on this to do my comic.
My coworker just kind of ignored him and said "really? That's nice" as he thought the guy was kind of crazy or something (and we do get our share of crazy people in the store).
Until a couple of other customers came up to him and were like "Oh my god! Method Man! Can we have your autograph!"
So apparently he had some knowledge/imput into the comic and was excited about it.

There are also some older, 'Nine Rings of the Wu Tang' comics that are pretty terrible and from like, the height of the Wu's popularity. Fellow Wu Member Ghostface had a cameo in 'Iron Man'--it got cut though--because he often uses the name "Tony Starks" and has an album called "Ironman".