Warning: This post is totally full of swear words, and is thus NSFW (or for people who don't like the sailor-talk) 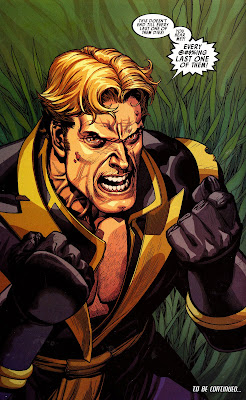 The above is a panel from Secret Invasion #5, depicting the superhero Hawkeye swearing vengeance on all Skrulls for the emotional wringer they had just put him through.

The persistence of swear words, obscured by the caps-locked number keys, in today’s comic books cracks me right the hell up.

It’s one thing to have characters swear the way that, say, Sarge does in Beetle Bailey, or Hagar in Hagar the Horrible, where it’s just a string of funny little symbols like lightning bolts and skulls mixed in with the @'s and %'s, with no clues to what they’re actually saying. But when Bendis uses the old @#$% style swears, he usually does it in such a context that it’s pretty clear what he meant to say anyway.

Hawkeye is clearly saying “Every fucking last one of them!” because that’s the only swear word that really makes sense in their, right? Bendis does this in his Avengers comics a lot: “@#$% you” is clearly “fuck you,” “Shut the @#$% up” is clearly “Shut the fuck up,” et cetera.

What I don’t really understand is why he bothers to do this. If you’re old enough to be able to read and understand that @#$% means a swear word, then you’ve heard swearing before and will just go ahead and read “fuck” in that panel with Hawkeye anyway. So not only is it the same as saying “fuck,” but it also draws attention to the fact that the writer/publisher is purposely not saying “fuck;” it’s a kind of worst of both worlds situation where the writer looks both crass and cowardly at the same time.

(Whether Marvel comics should have such language is perhaps another argument; they aren’t governed by the Comics Code Authority, they self-rate this particular comic as “Teen-Plus,” one really needs a full-time job to be able to afford Secret Invasion anyway, and is salty language any worse than scenes of shirtless Tigra being pistol-whipped in her bedroom on videotape? Or worse than our heroes totally murdering a bunch of people at the climax of this issue?)

And it’s so easily avoided, anyway. If Hawkeye simply screamed “Every last one of them!” in that panel, what would be lost, exactly, other than the comic strip swear word, reminding readers that as gritty, sexy, violent, morally ambiguous and “mature” as this Marvel comic may be, it’s still one that’s too immature to be allowed to swear like a grown-up comic?

Anyway, the reason I bring this up at all this month is because Bendis writes some pretty weird “@#$%” scenes in this issue. Because he uses those symbols so specifically, at a one “@#$%” –per-implied-word (or part of a word) ratio, you can almost always be sure of what the word is meant to be.

Sometimes it’s slightly more ambiguous. For example, this scene of Agent Brand getting frustrated while trying to free Reed Richards before a bunch of Skrulls rush in and kill her:

She could be saying, “Fuck!” Or she could be saying, “Shit!” Both are perfectly contextually appropriate, commonly used four-letter words used to express frustration. (And here, if Bendis wanted to avoid the kiddie comic comparison, he could have just went with “Damn!” or “Crap!” or even a multi-word, "clean" expression of frustration, like, “C’mon, c’mon, c’mon…”)

There were a couple of instances where the one-to-one @#$% for swear word substitutions just don’t really make any sense. Or else some of these people just swear funny.

So, for example, here’s Agent Brand again, giving up on a plan to trick a roomful of Skrulls into abandoning ship and deciding to just open an airlock and suck them all out into space instead:

Now, contextually, “Eh, fuck it” would make the most sense. If I were Bendis, I might have just said “Eh, screw it” to avoid having to use the @#$% symbols at all, but “screw” isn’t a bad word. So he probably meant “fuck it.”

BUT! Note that the “@#$%%” used has not four characters, as the four-letter word “fuck” does, but instead has five. Therefore, Brand used a five letter swear word that is inappropriate for a comic book readership of “Teen-Plus.”

Whatever could she have said?

Most of the swear words you don’t seem to be able to say in a non-Max Marvel comic are four letters long: Fuck, shit, piss, cock and the, um, other c-word I can’t bring myself to type.

Unlikely; I’m fairly certain “bitch” is okay in a “Teen-Plus” book, either as a noun or verb.

Nah, neither of those make any sense.

Now, “penis” isn’t really a swear word, but I imagine it’s one that Marvel heroes can’t say unless maybe, maybe they’re talking about an actual penis. But I don’t think they’d let Captain America say, “God, Iron Man, why are you being such a penis about this Registration Act?”

Of course, “Eh, penis it” doesn’t make any more sense than any of the other options, but it’s the last of the five-letter swear words I can think of.

The other odd swear word came from Ares, the Greek god of war who is currently serving on Iron Man’s Avengers team.

Engaged in a battle against Skrulls that think they’re Avengers, Ares rushes up behind a Skrull that thinks it’s Thor and is trying to convince the Avengers that he is actually the Odinson. Ares buries his battleaxe in him mid-speech, saying: 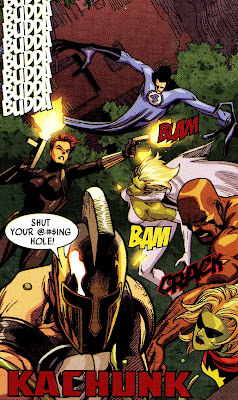 Did Ares say, “Shut your assing hole!” to Thor before smiting him?

So, “Shut your assing hole!” it must be. That doesn’t make very much sense, but then I think Ares is probably the kind of guy who gets so angry that he gets flustered and says some pretty nonsensical stuff in the heat of battle.

It's almost funny how comics can be ultra-violent but if a character utters a fucking swear word (as opposed to a @!%*ing swear word), you know that you are reading a "Mature Readers" book.

I was thinking about this the other day in regards to "The Dark Knight". Its an exceptionally violent movie. So why isn't it rated "R" like "The Godfather" (for example)? It basically comes down to a lack of profanity.

I'm not saying these comics (or movies) need the profanity. But you are right that drawing attention to it by using symbols is probably not a good idea.

Or to put it another way, can you imagine if "The Dark Knight" "included" swearing by bleeping it out?

"I was thinking about this the other day in regards to "The Dark Knight". Its an exceptionally violent movie. So why isn't it rated "R" like "The Godfather" (for example)? It basically comes down to a lack of profanity."

I believe the old(er) Harrison Ford movie Air Force One, where President Indiana Jones goes nuts on some terrorists and beats them all to death was rated R strictly for violence, as there was no nudity or foul language depicted.

If we're going to talk about movies we have to talk about the MPAA and how they routinely break or bend their own guidelines to accomodate movie studios, but I'm sure Caleb is more informed about them than the rest of us. I really though The Dark Knight was R rated when I left the theatre, even though I was very aware that the only language in the movie was Harvey Dent saying "ass."

The swearing in comics is like a bleep on TV. It can be used for comedic effect(with a wink that says "Oh, we're not actually really cursing.") but it can't be used with any degree of seriousness. That's why televised movies redub dialogue when language can't be cut out: the audio equivalent of @#$% is too stupid.

We should photoshop funny dialogue into these panels, a la the hilarious Big Lebowsky redubbing(This is what happens when you find a stranger in the Alps!).

Maybe Ares is swearing in Greek? Is there some horribley offensive three-letter Greek swear?

I am struck to wonder why penis is not a swear word. I mean, nearly every other word to refer to that body part is, and I still feel vaguely dirty saying it.

Agent Brand is obviously saying "Blast it!". And Ares is swearing in Greek.

I liked the Milestone scribble. Milestone also let the rest of the sentence communicate exactly what swear was being omitted, but the scribble didn't have the weird "juxtaposing Beetle Bailey onto a serious moment" feeling.

What it looks like to me is that Bendis is just writing the script with the language in place, like he would with "Powers" or "Jinx", and then just using the search-and-replace function of his screenwriting software to swap out "fuck" for "@#$%".

I assume the 3 and 5 character variations are just the letter getting tired of typing shift+2345 over and over.

The swapping out is silly though and takes the reader out of the moment. It's possible to be hardcore and bad-ass in a mainstream, all-ages book without the swear swapping. What did Jason Todd say when the coke head rapist "fell" off that balcony?

Aside: I'm kinda upset that Mockingbird isn't back for real (yet).

Why can't writers like Bendis grow up and write compelling dialogue without having to rely on cliches and "tough guy language"?

I mean, would Beast be as interesting and lovable a character if "Oh my stars and garters" were changed to "holy $%#@" every time?

Caleb, I credited you in my gag about Ares in this week's Damn Dirty Skrulls: What We Know Now write-up at Newsarama. I never would have noticed the three-symbol-swear had you not pointed it out.

what an interesting analyze... keep it up,man.