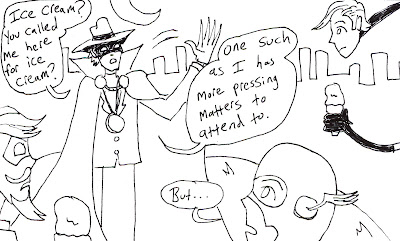 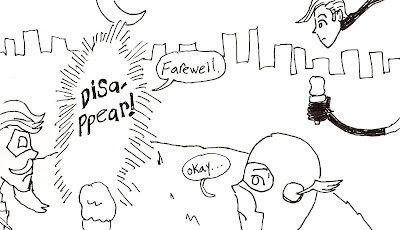 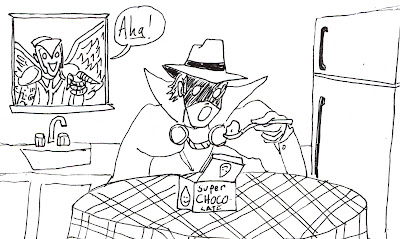 I can't see Phantom Stranger keeping ice cream in his fridge. Or even having a fridge. I can see him knowing where all the best ice cream street vendors hang around.

Has he ever met Zauriel on-page anywhere? Because if the Stranger was an angel(which was Alan Moore's origin for him so it's totally the real one{once Geoff Johns has the chance to confirm it}), then he ought to know Zauriel, right?

ps: these were all really neat, Caleb. Damn you for making me google Yaz.

My one and only comics pitch, back when I had a contact at DC towhom I could pitch, started off with what would then have been Zauriel's and the Stranger's first on-panel meeting-- I liked those possibilities. Pretty sure they've since been in big group panels together to no particular effect.

Great artwork, great joke, but it does seem off to me in the way Scott mentions-- it's less out of character for the Stranger to stop for an ice cream in the big group than it is for him to own a refrigerator.

Haw! The Phantom Stranger LOVES ice cream. But he also loves messing with the JLA's heads.

I think the Phantom Stranger also has macrame owls hanging in his living room.

I'm positive Phantom Stranger and Zauriel were in the same place at the same time before (certainly in Day of Vengeance, right? and I think that Infinite Crisis: Day of Judgement one-shot with all the magic characters?), but I don't recally any specific interaction between the two, which does seem a little weird.

They may have spoken to one another during Shadowpact, but I didn't read too much of that series. I tried a few issues after Zauriel joined, but couldn't take it. I thought the stranger was, like, always showing up and telling the 'Pact to go do this or that, though.

The interactions in Shadowpact were nothing of interest. Of course, the Zauriel who joined Shadowpact was also nothing of interest-- Self-Righteous Angelman, with none of the wryness or humor that he had when first introduced. The funny Zauriel is the guy who I want to see comparing notes with the Stranger on life as a sometime former angel. (I therefore really like Caleb's Zauriel-in-the-picture.)