Earlier this summer, Paul Pope visited Columbus to talk about his work at The Wexner Center for the Arts as part of the Jeff Smith: Bone and Beyond event. During the question and answer portion, someone mentioned how much they enjoyed the detailed world-building Smith put into Thb, and he talked about how that was one of his favorite things about working on a series like that—if he wanted to spend 20 pages talking about roofing materials for theoretical villages built on Mars in the future, he had the freedom to do that.

He’s always been more interested in the make-up of fictional worlds as much as the events that transpire in them, he said. When he’s watching a Sherlock Holmes movie, he finds himself more interested in what Holmes might keep in his desk than who murdered who and why.

That sort of detail orientation might strike some as a weakness in a storyteller, but it’s a great advantage to someone who both writes and draws his own comics like Pope, particularly when they so often occur in fantastic settings so far removed from our own (the Martian future of Thb, the futuristic settings of 100% and Heavy Liquid, the Gotham City of Batman: Year 100).

As I had mentioned at the time, hearing how much thought Pope had put into Batman: Year 100 made me want to revisit it, and when I did so I borrowed a trade collection of it from my local library, rather than digging out my single issues.

The trade comes with a great deal of backmatter, including Pope’s first Batman story, another out-of-continuity affair called “The Berlin Batman” from an old issue of The Batman Chronicles (more on that Batman later in the week). Among all that backmatter were plenty of sketches from Pope, and an essay on the creative process behind the book.

I think this sketch, intended for one-time Batman editor Bob Schreck, perfectly encapsulates what exactly it is that makes Pope a great cartoonist instead of simply a really, really good one (and head and shoulders above so many of the artists who draw Batman): 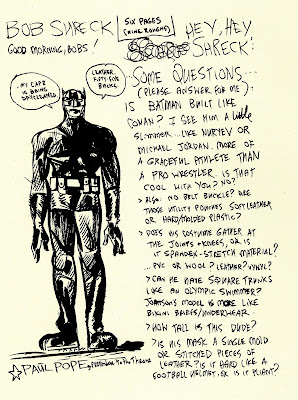 Not the drawing itself, of course—that’s just a goofy little sketch—but the questions. Beyond asking about Batman’s build, something it’s difficult to imagine Ed Benes or Tony Daniel doing before turning in their pages, he asks some incredibly specific questions about materials.

Because Pope understands that clothing gathers around joints and muscles when they move, and that leather and vinyl have different textures, and that while “soft leather” and “hard/molded plastic” might be similar, they are still different enough to matter a little when they’re being drawn.

How many artists even care about such things, let alone would have any intention of drawing the costume well enough that a reader would be able to tell how the costume would feel or what it might be made out of?

I’m not sure what story the above image/message to Schreck is about, exactly; whether it was for Batman: Year 100 (which seems like a good bet, given its inclusion here) or one of Pope’s other stories, as it’s not labeled. (Because he asks so many questions, it seems as if it might be for a more in-continuity story than B:Y100).

At any rate, it serves as the title page to Pope’s commentary, which is a pretty great read:


This guy would need a good, sturdy pair of boots. He’d need some serious footwear for all the trouble he’d be seeing. I imagine he’d prefer military combat boots, like the kind Airborne Rangers wear when they go leaping out of airplanes and helicopters; something steel-toed, lightweight, offering durability and support…It’s long been a pet peeve of mine when you come across comic book artists who insist on drawing generic, featureless boot-like shapes beneath the ankles of their superheroes, as if boots were just vague, foot-shaped stumps molded out of colorful plastic blobs.


Similar thought went into the rest of Batman’s costume. 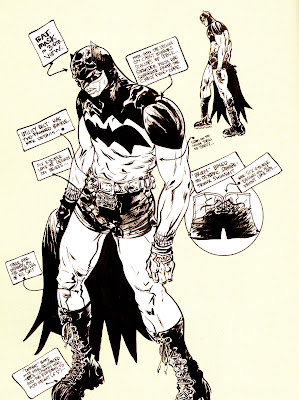 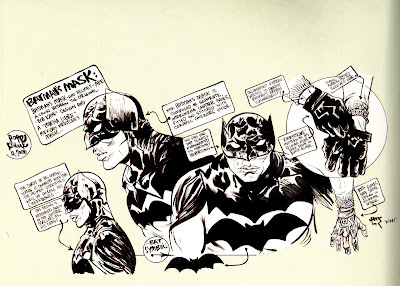 In addition to noting where all the seams are and so forth, these offer good examples of just how much thought Pope puts into drawing Batman, with the discussion of the way the mask is built, something which has little to do with the actual story (There are no scenes of Batman making a mask from scratch, for example). 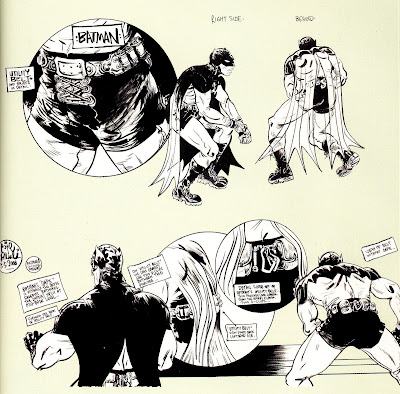 Pope also takes the time to fill every pouch of Batman’s utility belt, which I thought was very, very cool.

It doesn’t really bug me so much now that Batman can and will pull out pretty much anything he needs from it these days (usually something that explodes or one of several different bat-shaped projectiles), but it used to bug the hell out of me when I was a little kid and Adam West would just so happen to have whatever he needed in his belt (That was the joke, of course, but I was way too young to realize that the Batman TV show was a comedy; I took it very seriously at the time).


His utility belt suggests an interesting challenge to a writer and a designer. You don’t want to just use the belt as a lazy story device, a cheap dues ex machina which gets him out of tight spots…

I tried to select the belt contents based on what Batman himself would likely think he’d need before setting out for battle. How much weight would he want to carry around on him? How and where would he organize the utilities in order to best…utilize them? How would he keep all the little metal things from rattling around and making nose when he needs perfect stealth?

…I didn’t want Batman to have a thousand little super-spy gadgets that did all the work for him. Regardless of what’s in his utility belt, Batman has to be believable, relying on muscle, brains and will power more than anything else.


Here’s what Pope stocked Batman up with for Batman: Year 100: 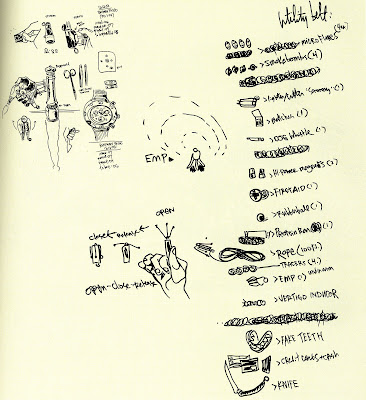 There’s some of the familiar stuff (smoke bombs, flares, rope, tracers), ome handy things to have around that you rarely if ever see Batman pull out of his belt (knife, matches, money and credit cards), a few sci-fi things (vertigo inducer, EMP generator) and some things only Pope seems to have thought of, like the fake vampire teeth and a protein bar.

“This is a very physical superhero we’re talking about; he’s bound to get hungry,” Pope writes. “It’s another pet peeve of mine how little the question of hunger or the need to eat is addressed in comics.”

That’s a good point. Usually the only time food comes up in a Batman story is when Alfred brings it to him, and Batman’s all “Not now Alfred, first I’ve got to solve this case,” and it’s used to insinuate how inhuman Batman is—he’s so intent on eradicating crime that all he needs is a cup of coffee a day to live on.

Carrying his own food with him is actually probably a must for Batman, since it’s hard to imagine him going up to a hotdog stand in costume the way Spider-Man often does. He couldn’t even slip out of costume and stop at a restaurant or anything, as his secret identity is a rather famous person, and it wouldn’t do for a convenient store clerk to note that billionaire playboy Bruce Wayne stopped by for a bag of chips and a hot dog at 3:30 a.m., shortly after that shooting two blocks over where the Batman was sighted.

So Paul Pope? Pretty much a genius.


This section of the Year 100 trade, by the way, is what made me realize how much better Final Crisis would be if Pope were illustrating it rather than J.G. Jones. Not only does he share with Morrison a love of Kirby creations and making sense of superhero silliness, but his process seems to be the same.

Whereas Morrison will channel characters, or talk to people dressed as Superman about what their Superman-like thoughts are, Pope was here putting himself in Batman’s place and imagining what Batman would do for lunch or wear on his feet.

It also made me dislike the costume in The Dark Knight a little more than I did before just rereading this. One of (several) moments that Dark Knight pulled me right out of it’s more-realistic Gotham was the first time Batman appears and disappears soundlessly from Gordon’s presence, despite wearing some 60 pounds of plastic and rubber that looks heavy and noisy at rest.

I wonder if some costume folks with a Hollywood budget would be able to take these designs, tinker with the boot laces, gloves and shorts to make them more like the traditional costume, and come up with a costume for the next Batman movie that doesn’t look really stupid?
Posted by Caleb at 6:51 PM

That is awesome. I've held off of reading Batman Year 100 because it sits next to Batman: Vampire: Tales: From the Multiverse on the shelf at Borders and I figured it was just another Elseworld. But looking back at some of Pope's Batman short stories and stuff I have, I think I'll be picking up year 100.

I always love the cool "Let's talk about Batman's cape and belt" conversations, and seeing the amount of thought and practicality Pope put into this makes me wonder if he doesn't really go out at night and beat people up. Batman carries a dog whistle? Of course Batman carries a dog whistle(I'm certain he will in the next movie, too). A rubber ball? You know there's an untold Batman story where his red rubber ball saved the city.

This was awesome, Caleb. Amazon should give you some money.

I don't know, I appreciate Pope's style, and I'm certainly not adverse to it, but I don't actively LIKE it. I'm waiting for something inside my head to click . . . will that happen, or is it just a difference of artistic taste?

I actively dislike it. The lace-up trunks look particularly silly. They recall Mickey Mouse more than they do Batman.

Amazon should give you some money.

I guess Year 100 is kind of an Elseworlds, but it's more of the possible future variety like Dark Knight Returns than a "What If Batman Killed Kennedy?" type story. It's set 100 years after Batman's real-world first appearance.

But don't buy that trade just yet! I've got one more Year 100-specific post coming, a look at that story's Batmobile, which is the greatest.

actually, year 100 is part of the official continuity, not elseworlds - this was one of the interesting things.

also, there -were- details in the movie that made me think- hey, they read pope's batman!