Review: Batman: The Man Who Laughs 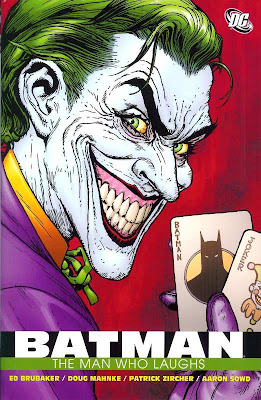 What a strange book this is. If one squints and tilts one’s head just right, it’s easy to see the rationale behind 2008 hardcover Batman: The Man Who Laughs.

The contents deal, in part, with the first time The Joker met the Batman; it’s a tale that’s been told and retold in DCU comics, even post-Crisis, but with The Dark Knight telling it to a very, very wide audience, it makes sense to get as many Joker vs. Batman stories on the shelves as possible (And this one has the benefit of sharing some of the same bits of inspiration as the blockbuster film).

It’s also written by Ed Brubaker, who did quite a bit of work in and around Gotham City at the beginning of the decade, and who’s star has continued to rise at Marvel, thanks in large part to his success with killing off Captain America and sustaining the quality of Captain America without its deceased star.

Why DC chose to collect the stories they did under this cover and this title, however, is pretty perplexing. More than half of the contents of Batman: The Man Who Laughs consist of something other than Batman: The Man Who Laughs, and the Joker only appears in one of the two stories. Even the artists and settings differ (The Joker story is set in the Batman: Year One era, the later story is set in the modern “Year Now” era).

In fact, the only things they have in common is that Brubaker wrote both of ‘em, and that Batman’s in them.

The title story originally appeared as a 64-page prestige format one-shot in 2005. It was bound with a bit of a spine, and would therefore definitely fit most people’s perceptions of a “graphic novel” if it were simply reprinted in 2008 to take advantage of Joker-vs.-Batmania. That is, it would stand up on a bookstore or library shelf on it’s own, even if the name on the spine would be a little hard to make out.

The desire to reprint it as a slightly larger hardcover was certainly to make it more appealing to the library and book store audience, but that left the problem of what to fill up the rest of the book with—64 pages is far too slim for a hardcover.

There are certainly no shortage of Batman/Joker stories out there; they could have even used different versions of this story, like Legend of the Dark Knight #50, featuring a story by Denny O’Neil and Bret Blevins, with a pretty creepy cover by definitive Joker artist Brian Bolland, or perhaps the first Joker story from Batman #1 or 1978’s “The Sign of the Joker” by Steve Englehart and Marshall Robers, the last two of which inspired certain aspects of Brubaker’s story (and Nolan’s movie).

Instead they chose “Made of Wood,” a three-part Detective Comics story in which Batman teams up with the original Green Lantern and the retired Commissioner Gordon to solve a decades old mystery.

Both are fairly strong stories; “Made of Wood” moreso than Man That Laughs, in large part because Brubaker was telling a story that hasn’t been told dozens of times before.

But they don’t really seem to go together. “Made of Wood” seems like filler, but since it’s actually longer than the title story—66 pages—it makes the title story seem like the real filler. A new reader reaching it would likely be surprised to find it there. Surprised, and perhaps disappointed.

Grafting it onto The Man That Laughs also makes it more difficult for DC to do some sort of complete-ish collection of Brubaker’s work, which would fit quite nicely into a several volume series.

As a writer equally adept at superhero adventure, crime and police procedurals and even martial arts fantasy (as Brubaker’s gone on to prove himself in recent years), he’s pretty much an ideal Batman writer. He got to help redefine Catwoman (a book that was just re-cancelled this week), worked with Greg Rucka on brilliant but cancelled Gotham Central, and contributed chapters to a few of the last Batman crossovers before the last DCU reboot (“Bruce Wayne: Fugitive,” “War Games”).

He also got his chance on the two flagship Bat-titles, and he excelled at them, but editorial rejiggerings seemed to have kept him from ever getting too comfortable.

He wrote Batman for a stint between 2001 and 2002, from Batman #591-#598, plus #604 and #606 and #607 (those last two issues with some guy named Geoff Johns, who’s kinda marketable these days). All of these were drawn by Scott McDaneil, who’s somewhat abstracted, highly energetic style wasn’t the best of fits with Brubaker’s particular skill set, but still, that’s about a dozen issues of Brubaker on Batman just sitting around, not being in a grapic novel.

And in addition to “Made of Wood,” Brubaker wrote a six-part arc for TEC #777-#783 entitled “Dead Reckoning.” This was penciled by Tommy Castillo, and would probably make for a decent trade by itself; it features name villains Penguin, The Riddler, Catwoman, Joker and Two-Face.

If you count 64-page Man Who Laughs like three 22-page comic books, that all adds up to about 24 issues of Rather Popular Writer Brubaker on Perpetually Popular Batman, or two or three good-sized trades featuring almost all of Brubaker’s Batman that doesn’t already appear elsewhere.

As to the contents, they’re both pretty solid efforts. Man Who Laughs, named for the silent movie version of Dumas’ novel that inspired The Joker’s look, is presented like a continuation of Year One, right down to the Batman and Gordon tag-team narration and fonts.

Some new villain calling himself The Joker predicts killings ahead of time, his victims dramatically dropping dead at the designated time, despite the best efforts of Batman and the police. His ultimate plan to is to poison Gotham City’s water supply with his Joker venom; Batman stops him.

The main strength of the story is just how straightforward it is; Brubaker really writes the encounter as if The Joker really were a new character, with no heavy-handed foreshadowing that this more colorful than usual crook is going to go on to someday star in “A Death in the Family” or The Killing Joke.

The art is by Doug Mahnke, penciling and inking, and while Mahnke is a master compared to some of the guys DC has drawing Batman these days, his muscular, dynamic Batman and highly idiosyncratic character visages seem somewhat contrary to the by-now well established look and aesthetic to “Year One” Gotham. There’s a great difference between the art of David Mazzucchelli, Tim Sale and Matt Wagner, but the differences between those three aren’t anywhere as near the difference between Mahnke and the three of them. (That’s quite a cover image though; my face hurts jut looking at Joker’s smile).

“Made of Wood” is penciled by Patrick Zircher and inked by Aaron Sowd. Their art shares a level of detail with Mahnkes—particularly for backgrounds and settings—but the characters are more realistic; Batman looks more like a costumed man than a he-man superhero, and the bit players look more like people you might pass on the street, rather than caricatured characters. (I like both artists a great deal; Zircher and Sowd just seem better suited to Brubaker’s Batman stories).

This story more than any other Brubaker one I’ve read demonstrates how perfectly suited he is for the character. The two superheroes are more or less incidental to large parts of the story, in which retired James Gordon stumbles upon a mystery and tries to solve it. It’s your typical murder mystery novel, but with extremely colorful protagonists.

Gordon is out for a morning walk when he finds a dead man with the words “Made of Wood” carved into his chest and dumped at the foot of a statue of Green Lantern Alan Scott, who operated in Gotham during the Golden Age (Wood, by the way, is Scott’s only weakness). Back during that Golden Age, we learn there was a serial killer with the same MO, but the crimes just stopped and their perpetrator was never brought to justice.

Gordon and Batman each try to crack the case, with Scott eventually visiting and lending a hand, the narrative flashing back to period stories featuring Scott, his villain Sportsmaster and his sidekick Doiby Dickles (sadly, no Streak). It’s a great little superhero mystery story, somewhat evocative of James Robinson’s Starman in the way it jumps between the decades, but it sure doesn’t have much of anything to do with the story that precedes it.
Posted by Caleb at 8:36 PM

I bought the Man Who Laughs when it first came out, and I kinda wondered why it looked so thick on the shelves, but the way DC and Marvel shrink-wrap their hardcovers makes it impossible to see what's actualy inside one of them without buying it.

Is there any other media that insists it be impossible to peek at the product before buying? I watched probably 15 minutes of the Dark Knight movie on Yahoo before the premier weekend. If I go to a music store there's a scanner and headphones so I can listen to a sample track. But with hardcover graphic novels it's a shot in the dark: sometimes I buy Superman and the Legion and it's great, other times I buy Detective #27(about a non-Batman Bruce Wayne of the 1930's s who ends up fighting his evil father Thomas Wayne{who murdered his wife and faked his own death because he's evil}).

While I would be pleasantly surprised to find Made of Wood collected, I'd be kinda pissed off about being surprised by it, and I wouldn't want to re-buy the Man who Laughs to have it. WTH, DC?

I think the reason that they put Made of Wood in the man who laughs is because of the jokers success with the crowd in the Dark Knight. They wanted to reel in new Batman fans with something simple that they already knew, something with the awesome dynamics of Batman and the Joker, and then show them what else batman has to offer. Hopefully by using Made of Wood people will see that the Joker isn't the only great thing about the Batman storyline. That's probably why they did it, whether it worked or not, I don't know but its at least kinda understandable.

But Made of Wood would be kind of a bad intro for the movie crowd. Jim Gordon is retired(which has been undone after IC) and it doesn't feature any supervillians. Plus it features the weird Green Lantern that doesn't look like Green Lantern or correspond to anything found in Superfriends.

If the intent is to hook a casual buyer on his way home from the theater, there are a bunch of other story arcs from Brubaker's run that are much more straightforward.

That is a very good point. I didn't think of that

Somehow I don't think DC has a problem with 64-page hardcovers featuring Batman vs. The Joker . . .

That that had to be padded out to 64 pages!