Alan Scott's canine companion Streak the Wonder Dog wasn't the only Golden Age superhero animal sidekick that Les Daniels, Chip Kidd and copany highlighted in The Golden Age of DC Comics: 365 Days, that book I keep posting scans from. Space is also allotted to Ace the Bat-Hound and two much less-familiar super-pets, one of whom I'd heard of but never seen, and another I'd never even heard of.

The former is Robbie the Robot Dog, the unimaginatively named robot dog of the Golden Age Robotman (not to be confused with The Doom Patrol's Robotman, Cliff Steele, although their origins are quite similar). The original Robotman was scientist Dr. Robert Crane, who had developed a robot for use as a full-body prosthetic. When he was fatally wounded by crooks, he had his assistant stick his brain in the robot body, and thus became an automaton avenger.

He first appeared in Star-Spangled Comics, and later in Detective Comics. (More recently, he was in 1981-87 series All-Star Squadron, James Robinson and Paul Smith's dark 1993 Elseworlds series The Golden Age and (extremely) briefly in Geoff Johns and Lee Moder's short-lived Stars and S.T.R.I.P.E. series and Robinson's Starman (though in non-Robotman bodies).

Robbie hasn't gotten around quite as much since the close of the Golden Age. 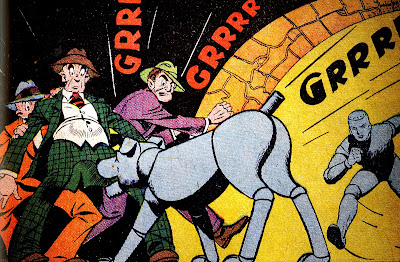 And here's another Thompson image, from 1947: 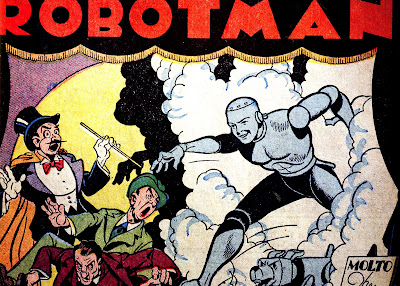 More than fifty years before the AIBO! I don't suppose there's much hope in DC reprinting any old Robotman stories, but the art in those panels really is quite charming.

The other super-pet is Airwave's parrot, Static. Or, as Daniels refers to him, "Static the Proverb Parrot." Daniels also goes on to say he was "essentially a pest whose only talent was squawking homilies mixed with wise-cracks. (Having lived with a parrot for two years, I can attest that "essentially a pest" is a good description of any pet parrot).

While I have never read a single Golden Age Airwave story, I've long wanted to, as he seems like such a delightfully weird character.

Law clerk Larry Jordan fought crime using the cutting technology of radio, building himself a costume with dials and antennae on the ears which allowed him to intercept police radios and phone calls. To get around town, he would roller-skate atop the telephone wires. (His grandson is the current Airwave, who had actual superpowers instead of radio-based gadgets. He was a JSA reservist who's been MIA since Infinite Crisis).

The original doesn't pop up very often, although Brad Meltzer did just namedrop him in DC Universe: Last Will and Testament. An Airwave Chronicles or Airwave Archive repring project eems even less likely than a Robotman one; maybe DC could put together some kind of Golden Age sampler someday to include the likes of these guys...?

Here's a 1945 George Roussos image of Static lookng on at Airwave's radio-ears in action: 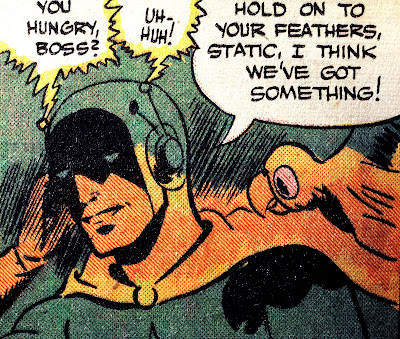 And here's a 1946 image by Harris Levy, demonstrating how color-coordinated this duo was: 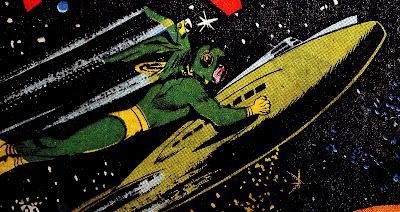 Is the world ready for All-Star Squadron of Super-Pets? I know I am.
Posted by Caleb at 6:30 PM

Didn't GA Aquaman have an octopus? Torg or something like that? And I caught a really old Hawkman cartoon (pre-Super Friends) where he actually had a hawk...

I recall in the 80s series All Star Squadron they re-wrote some history and said he was an uncle or some relation to Dick Grayson, Earth 2's Robin. It was a very emotional 4 panels where Robin finds out he has a living relative.

The last character named Air Wave was Harold Jordan, character was introduced in the 70s, where the story was he was a cousin of Hal Jordan, the Green Lantern. I'm not sure if that connection exists post-Crisis/Infinite or otherwise. That, or Hal can't be bothered going into space to see if he survived IC.