The other other wonder dog

In tomorrow’s Teen Titans #62, writer Sean McKeever and artist Eddy Barrows will be introducing Wonderdog into mainstream DCU continuity. (You can read five pages of the issue, during which Wonderdog appears and gets his name and cape, here).

This Wonderdog is, of course, the one from the early ‘70s iteration of Super Friends, the green-caped anthropomorphic dog who hung out with his fellow “junior Super Friends” Wendy and Marvin (whom Geoff Johns added to the Teen Titans line-up after the “One Year Later” jump.)

When McKeever and Teen Titans editor/DC muckety-muck Dan DiDio first started teasing about a wonder dog joining the team, I was initially worried they might have been talking about the DC Universe’s greatest hero, Rex the Wonder Dog, who had previously been hanging out with teenage hero Hero in the pages of Superboy and The Ravers, and Hero subsequently joined a Titans West team that never appeared after their origin story, which Johns co-wrote. So you see, Rex is practically a member already.

(Well, “worried” is probably too strong a word, but I really rather like Rex the Wonder Dog, and would prefer to see him stay in limbo for now rather than suffer the indignities of having to hang around Wendy while she’s dressed like this, or be forced by Clock King II to fight to the death against Ace the Bat-hound in a prelude to Final Crisis or any of the other horrible things that could befall such a character in one of DC's team books).

So last week when I was reading through The Golden Age of DC Comics: 365 Days by Les Daniels, Chip Kidd and Geoff Spear (i.e. That Book I Keep Posting Scans From), I was surprised—no, shocked—to find that there was apparently another wonder dog in DC’s character catalogue, and this original DC wonder dog was actually the pet of one of its Golden Age superheroes, Green Lantern Alan Scott.

Ladies and gentleman, are you familiar with Streak the Wonder Dog? 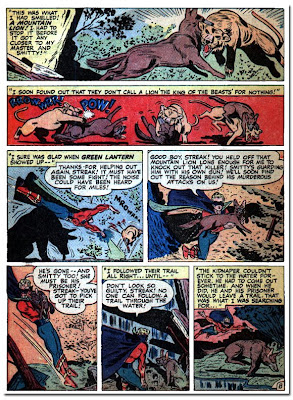 Debuting in the late ‘40s as the superhero slump was beginning, Streak was the creation of Robert Kanigher, and was introduced in the pages of Green Lantern as GL’s dog. 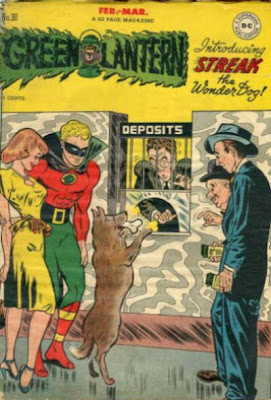 (I’m not sure who the curvy dame on the other side of Scott is, but I bet she helped sell just as many issues as the dog trying to deposit his bone at the bank did).

Four issues later, Streak is back on the cover, and what’s this? Green Lantern is not: 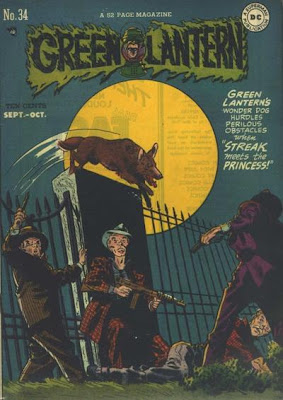 Streak also got the cover to himself on 1949’s Green Lantern #36 and #38, the very last issue of this volume of the comic. 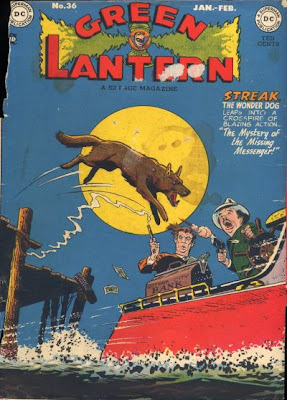 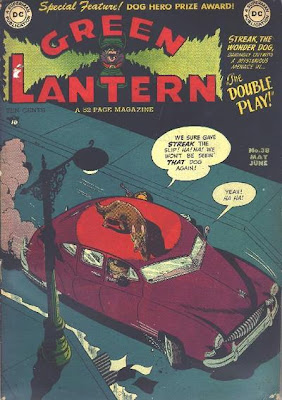 Oh man, poor Alan Scott. Hal Jordan fans might have thought they had it bad in the '90s when their Green Lantern lost his book to a brand-new young upstart character like Kyle Rayner, but at least he didn't lose the book to his dog.

Now, if that last cover, featuring a German shepherd perched atop a car full of escaping crooks, reminds you of the sort of thing Rex the Wonder Dog might have done in one of his adventures, there’s probably a good reason for that. According to a 2006 installment of Comic Book Urban Legends, Streak stories continued in Sensation Comics for a while, until Kanigher redeveloped the crime-fighting canine wonder dog concept and launched The Adventures of Rex The Wonder Dog. So does that mean Streak and Rex are related? Has Roy Thomas written a story about this?

Here are two interior images of Streak, culled from The Golden Age of DC Comics. First, despite being leashed and tied up, Alan Scott’s dog wins again, convincing Alan Scott’s secretary to stay on the train they're riding on: 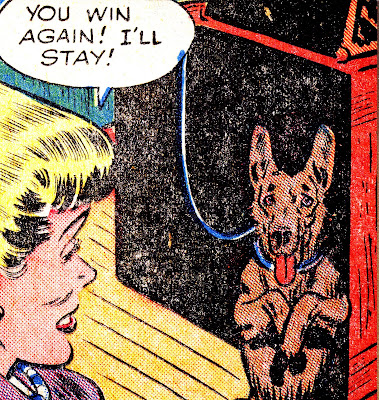 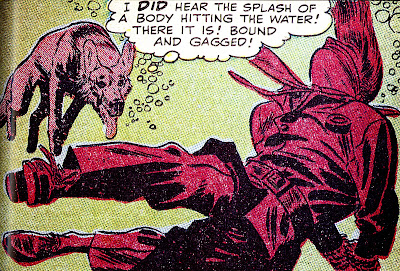 All of the above images, by the way, are drawn by Alex Toth. No wonder Streak the Wonder Dog look so wonderful...
Posted by Caleb at 5:21 PM

I thought Rex was already in use as part of Shadowpact?

Can't believe you made it through that whole post without a G'Nort joke.

Oh, yes. I believe Alan was actually STREAK's sidekick, since Alan didn't seem able to do anything without Streak. ;-)

Hal Jordan once had to team up with Rex the Wonder Dog. It's a funny story. I should go dig it up ...

Martian Manhunter once had a Basset hound that he treated HORRIBLY. Not intentionally horribly, but horribly nonetheless!

Well, you learn something new every day. I had NO idea that Alan had a dog, much less a WONDER dog.

No wonder Hal was moping when he and Clark went to play fetch in outer space with Krypto.

There was a lovely issue with Superboy and the Ravers however, trying to sneak into Warrior's Bar, and they couldn' get in because they were all underage, but Rex, the Wonder Dog walked right in, because everybody knew who he was.

I thought Rex was already in use as part of Shadowpact?

Maybe. I only read a couple issues of that series. It would make sense though; he and D.C. are pals, and I believe Rex was in that IC:DoJ one-shot with all the magical characters.


Can't believe you made it through that whole post without a G'Nort joke.

Heh. The thought did cross my mind, but I thought I'd save it for a later post about Streak. If he can think in complete English sentences, I'm assuming he's sentient enough to work a GL ring, so, yeah, he should totally get one of those G'nort like bracelet-rings and join the Corps. There's already five earth GLs (plus Alan), why not a sixth?

Support me on this, people!

1) I hope to god you resisted the temptation to buy that Teen Titans issue (my last).

b) I vote for a Halloween special but only if you draw the characters in the costumes of their favorite heroes (and under those rules you just know Batman will still come dressed as Batman).

1) I hope to god you resisted the temptation to buy that Teen Titans issue (my last).

I did. I would have been tempted if there weren't, like, ten thousand new Marvel and DC books this week. Normally Barrows' art is enough to keep me from trying it out again; I really like McKeever, but ever since he's come on board it seems like its been nothing but tie-ins to books and stories I don't like...all drawn in a style I hate.

baal called it. That issue made me nauseous. And I work for The Scream Factory. At least you know what you're getting from us.

That issue made me nauseous. And I work for The Scream Factory. At least you know what you're getting from us.

Huh, that makes me curious. Does Wonderdog eat live babies or something...?

Huh, that makes me curious. Does Wonderdog eat live babies or something...?