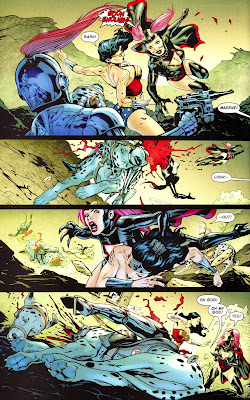 (This page of boobs, blood and a beheaded dog is from Final Crisis #3, written by Grant Morrison and illustrated by J.G. Jones and Alex Sinclair)
Posted by Caleb at 6:06 PM

Yeah, I uh...saw that. The "hey kids!" part doesn't bother me nearly as much as turning Mary Marvel into a member of Slip Knot. Or a Juggalo. Or whatever is going on with her-- I didn't pay for any of those editorial mistakes.

Seriously, I don't think people would be gushing over this book if they didn't know Morrison was writing it. It's not Countdown-horrible, but it's an embarrassing mess so far.

Was it on purpose that you could take all that dialog out of the story and put it in some softcore pornographic comic without changing it?

I still think Final Crisis has been great so far. And Turpin did say "asshole" in the second issue, so I think it's fair to say that the 12 and under crowd isn't the demographic DC is looking for.