Review: Goddess of War Volume One 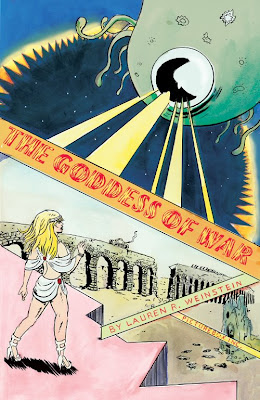 (Note: This review is already posted in this week's Best Shots @ Newsarama.com column, where it is nestled among many other reviews of new and recent-ish releases by the Best Shots team. I'm posting it here as well so I can add links and images. For preview pages, click here)

You wouldn’t know it from the state of the headlines, but the goddess of war is getting awfully sick of her job. At least according to her biographer, art teacher, rock and roller and cartoonist Lauren R. Weinstein, who recently launched an ambitious new series about the titular goddess deciding to take her first personal day in 175 years.

If you’ve never heard of the goddess of war, and thought the war deities tended to be male like Ares and Mars, don’t worry; she’s an original invention of Weinstein’s, a character she sometimes sings about with her band Flaming Fire.

Her goddess is named Valerie, and she used to be a valkyrie in Norse myth, until she worked her way up the divine ladder by devoting herself to her work, while her sisters Brunhilde and Gudrun got distracted by messing around with humans (see Fritz Lang’s Die Nibelungen for more on that sordid affair).

Despite the nod to classical mythology, Weinstein’s cosmology is decidedly postmodern. Valerie lives in The Headcave on her own planet, a castle shaped like a monster head, with an interior somewhat resembling Barbarella’s spaceship. She answers to Brainstein, a large bespectacled brain that works for god-like being No. 2 and tells her which appointments she needs to keep. Her best friends are her dog Fafnir and Nebulon, a giant tentacled blob “universe eater” that she only calls when she’s drunk. Among her past lovers is 19th century Apache chief Cochise.

Val’s dissatisfaction with her job seems to come from how messy and indistinct war-fighting is in the 21st century, as she considered World War I a high-point of her career, and the meeting she misses is with a suicide bomber named Faheed with designs on detonating himself in New York City.

Opting to stay in and get drunk on a bottle of sacrificed virgin blood Mayan supplicants once gave her, Valerie gets nostalgic and eventually determines to visit Cochise in the past. The back half of the book shifts to a pretty straightforward historical account of Cochise and Geronimo’s conflicts with the Americans, and the role the goddess played in its escalation. 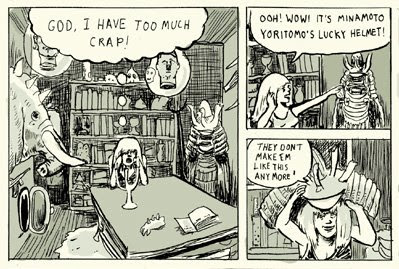 Weinstein’s artwork is on the rough and primitive punk side of the spectrum, with a somewhat shaky line and scratchy human figures that help her achieve the surprisingly difficult aesthetic of polished, professional quality work under an amateurish looking veneer (It’s rather evocative of the work of underground comix luminary Gary Panter, who shares a publisher with Weinstein in PictureBox Inc.).

That art style is made especially easy to appreciate given the attention-demanding format of Goddess of War Vol. 1. It’s a good old-fashioned folded, spine-less comic book rather than a graphic novel, but it’s a giant comic book. Fifteen inches high and ten inches wide, it’s almost newspaper sized, with plenty of room for 25 panels per page, and huge, highly detailed and delicately rendered black and white etchings, devoted to maps of the universe and poster-like splash pages calling special attention to certain events, like Valerie and Cochise’s first meeting.

The huge size makes for a highly immersive reading experience, transforming readers to little kids with the funnies page spread out before them, but does present some problems once the book is finished: Just where the hell do readers store a spine-less comic that’s a good 50% larger than the rest of their comics? 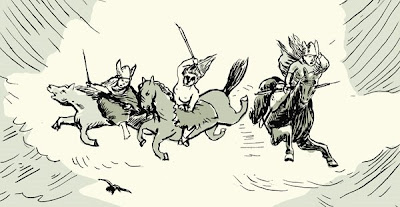