So far we’ve seen Paul Pope portray Bataman’s sidekick Robin as a cute German girl and a hunky gearhead, but we haven’t seen him portrayed in his original interpretation: A cocky teenage boy in a cape, mask and very little in the way of pants.

Pope got around to that particular interpretation with his issue of Solo, the final story of which was “Teenage Sidekick.”

It’s a short, 11-page story (actually, 10 and a half pages; part of the last page is devoted to an “ad” the way a lot of old DC comics used to be). It’s told through a third-person omniscient narrator, who talks us through the action, and, in the process, does a pretty good job of making the idea of Batman running around fighting killers and gangsters with a teenage help-mate seem downright plausible.

It opens with two rather large men in rather rumpled suits hauling an unconscious Dick Grayson between them, one nursing a bloody nose. Robin comes to, breaks away and goes on the attack again, only to get knocked out by a black jack.

The narrator tells us about him throughout the scene: “Fourteen years old, five foot eight, hundred-fifty-eight pounds…Intuitive, quick, a little arrogant, maybe. A hothead, a risk-taker. He’s brilliant actually, a natural born showman. If you had to have one kid on your side in a fight, this is the one you’d want.”

As the narrator recounts Robin’s origin, he comes to again, breaks free again, and beats the two men again, until he’s apparently re-re-knocked out. He also swears at one point, saying "#*@!?$X!" as he falls onto his attackers. I liked seeing that; it’s weird how you never see the teens in the DCU swearing, even comic book swearing.

We cut to Batman, on Robin’s trail, and hear a little about his origin, and why he might have taken Robin in, with Pope still using this Frank Miller-esque, abbreviated sentence structure, full of colorful to the point of purple imagery.

The goons take Robin in to meet their boss: 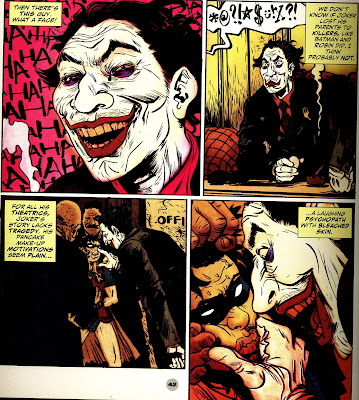 Make sure you click on that image to get a look at Pope’s Joker. He draws him as a version of the Cesar Romero Joker, complete with moustache (this Joker’s moustache would be growing on top of his chemically bleached skin, rather than obscured by make-up, as the narration points out the “bleached skin” specifically). The Joker looks particularly Romero-like in the second panel there. There’s something super-creepy about the Joker from the silly TV show being cast as the psycho killer of the comics.*

Also of note on this page is Robin dropping another @#$%-bomb. I like out-of-context comic book swearing like this, because it’s so hard to imagine what he might be saying. “You!! Oh no!” and then some sort of swear word that makes the Joker stop laughing and make that Romero expression.

As Pope switches to narrating about the Joker, they haul Robin out to some sort of industrial press, which slams up and down with a loud BOOM BOOM BOOM filling the background of the panels, the plan being to toss Robin under it (and he loses his shit a bit here, screaming at the site of the press and the realization that he’s going under it).

Then he changes his mind, and decides to have Robin thrown into “an industrial grade plastic shredder.” Robin shrieks and pleads with the thugs to stop, but he’s thrown into it…and manages to press his left hand against one wall and his legs against the other, stopping him from falling into the grinding blades, while his left hand gathers his cape and lifts it above them.

That leads to the juxtaposition of these two panels, which provides a pretty nice diptych of Batman and Robin:

Then Batman beats the devil out of the Joker and his men, leaving Robin to haul himself out of the grinder himself, and the narrator to keep wondering about what Batman sees in him. Is it just empathy? Or “maybe there’s more to it—Maybe Batman knows that without Robin he’d be too much like the Joker—Too much like the enemy. Dark, isolated, alone. Maybe Batman would come to believe he’s the only one alive in the whole world-- the only one who counts. A lonely, hollow man, always laughing, never at peace.”

It ends with Batman looking over his shoulder at his teenage sidekick, telling him simply “Take notice of your missteps for next time.”

I guess I didn’t scan as much of this story as I thought I did. So it may not be apparent from the few scans above, but this story is extremely well colored, by Mr. James Jean, with most of the panels being predominantly black, blue or pink; often with blue foregrounds contrasting sharply with pink backgrounds.

*Coincidentally, Mike Allred's Solo issue also includes a Batman and Robin story ("Batma A-Go-Go!") in which the Joker looks an awful lot like the Cesar Romero version, complete with moustache.
Posted by Caleb at 7:52 PM

Now THAT'S a terrifying version of the Joker!

That's brilliant art. What's the title of the comic it came from? :o