You've seen the movie, now play with the free cereal box prize based on it!

Plenty of reviews have been written about how sophisticated and thought-provoking it is for a summer blockbuster, and how dark and how grim it is. I know some parents who have mentioned they thought it should have been rated R, and that they had no intention of letting their kids see it, no matter how into Batman they might be.

And yet the licensing tie-ins for the movie are clearly directed at kids. (As I said of the DK toys I found at a Wal-Mart last week, if you’re young enough to play with some of them, you’re probably not old enough to see and appreciate the film; if you’re old enough to see it, you’re way too old to be playing with the toys, no matter how cool that Wayne Tech Mega Cape is). 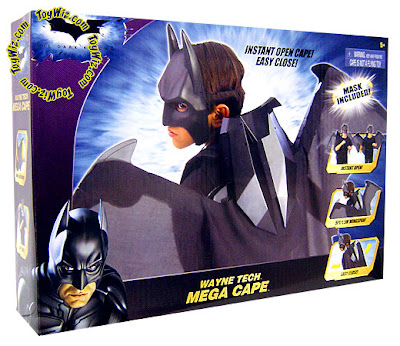 (Above: Wayne Tech Mega Cape. Please note it has a five-foot wingspan, and is thus very cool)

Mike Sterling mentioned the super-deformed Heath Ledger as Joker toys on Progressive Ruin a couple of weeks ago, and linked to another blog post about the Joker toys, which can be found in boxes of your favorite General Mills cereal.

So last week I was in the grocery store, just, you know, buying groceries, when I passed an end-cap display of marked down General Mills brand kids’ cereals of the sort I never buy, because they are as expensive as all hell (now I finally understand why my mom would encourage us to eat elf-less Crispie Rice crisped rice cereal instead of Rice Krispies crisped rice cereal).

Because I make most of my personal purchase decisions based on things I read about on blogs, the slashed price of these cereals combined with the “Batman Stunt Figure Inside” ad across half the front of the box (and my lingering desire to see one of those new Miralco-looking hourglass marshmallows I mentioned in passing here before).

So, here’s what the front of the box of Lucky Charms looks like these days: 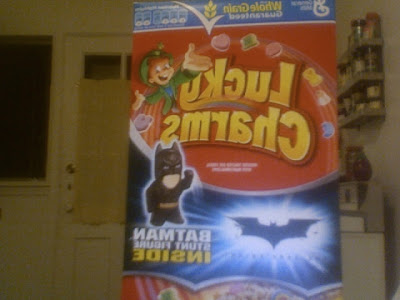 Super-deformed, huge-headed homunculus Bale Batman is almost as big as Lucky the leprechaun, and even more magical, based on his glowing aura.

I was in suspense over which of the four figures I would get—Batman Uppercut, The Joker Kick, Batman Chop or The Joker Chop (Sadly no Nurse Joker Stab)—for several bowls of cereal before a black plastic blob sealed in more plastic finally spilled out.

Well, it’s a Batman. Here he is outside of his protective cellophane condom, which keeps his compromised morals from tainting my delicious frosted toasted oat cereal with marshmallows: 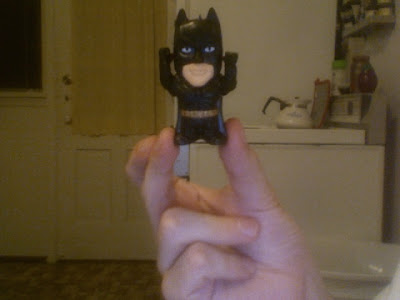 He is Batman Uppercut. If you push his right hand down, it springs back up, so he can punch something that was really, really, really close to enormous head. 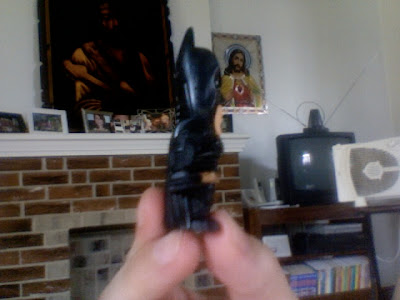 The back of the box also included a passel of activities labeled “BATMAN MENTAL AGILITY.”

These included two pictures of his Batmobile with five differences between them, a scramble of nine letters that spell out the name of one of his enemies, and then an exhortation to “crack the code,” on a five-word sentence in which some letters are already filled in. The code is simply A = 1, Z= 26 type code, but you don’t really need that to figure out what it says: “Batman has caught The Joker.”

Jeez, spoil the end of the movie, why don’t you, Batman Mental Agility test?

Anyway, Batman is apparently not very mentally agile, if this is how he tests himself.

As for the Miralco-mallows, here’s what they look like up close: 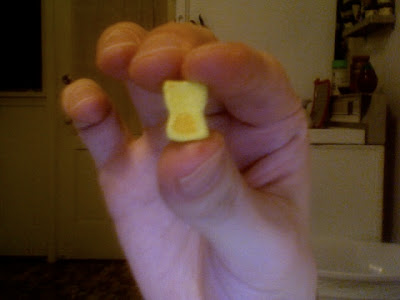 Naturally, they taste like stale sugar, horse hooves and artificial fruit flavoring, like all the other marshmallow bits. But do they also imbue you with miraculous super-strength, speed and endurance for a full hour after eating them?

I’m not positive, as I didn’t try fighting crime after eating them. I guess I did feel oddly up and energetic for about an hour after a bowl of Lucky Charms and then suddenly crashed, but that may have just been the sugar rush.
Posted by Caleb at 3:54 PM

Labels: batman, behind the curtain, close-up photos of my hands, comic book movies, the joker

For god's sake, no matter what your age rush right down to Wal*Mart and buy as many Batman toys as you can afford. Heck, buy MORE than you can afford and while you're at it, shoplift a lot too! I have four end caps of the crap in my section as well as enough of those wedge shaped stealth car boxes that they're plugging every hole in the Toy Department. I need them gone so BUY! BUY! BUY!

My impression of the Miraclo-mallow was actually a circle with the hourglass pictured inside, but even then, that is way too cool not to eat.

Um, is that a painting on velvet I spy over the fireplace??? Your midwesternosity is showing.

You actually ate Lucky Charms...and lived? You are a very brave man.

I got mine out of Cheerios, although lowered cholesterol isn't anywhere near as cool as Miraclo marshmellows. Phoo.

Anyway, my son got the Movie Masters Joker figure, and the Joker Stunt Figure is the perfect size for a ventriloquist dummy. Terrifying.

On the movie: initially I agreed with Christian Bale, but after watching the Dark Knight, I gotta say Batman needs Robin. He needs someone there to lighten him up, to give him hope, to keep him from eating a bullet...

My first thought when I saw the Wayne Tech Mega Cape was:

"How many little kids are going to try and jump off the roof of their house on the theory that thing will allow them to fly?"

I'm just saying, I hope they have excellent insurance and a very clear warning.